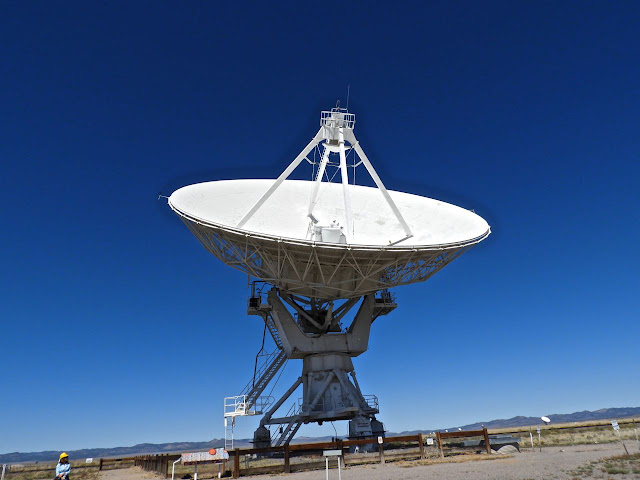 At the beginning of October, I visited the Very Large Array (VLA) located in New Mexico 50 miles west of the town of Socorro (127 miles west of Albuquerque).  The first time I visited this facility was probably some time in the early 80's so it was wonderful to see how much the facility had grown.    When I visited the first time, hardly anyone had heard of the place but the 1997 movie "Contact" changed all that. 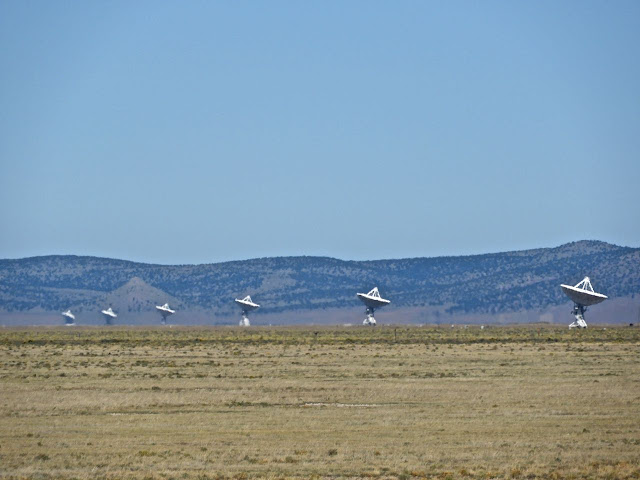 Scenes for that movie were filmed on the site in September of 1996.  The film crew was there for 5 days and battled some inclement weather to get the scenes completed in that span of time. 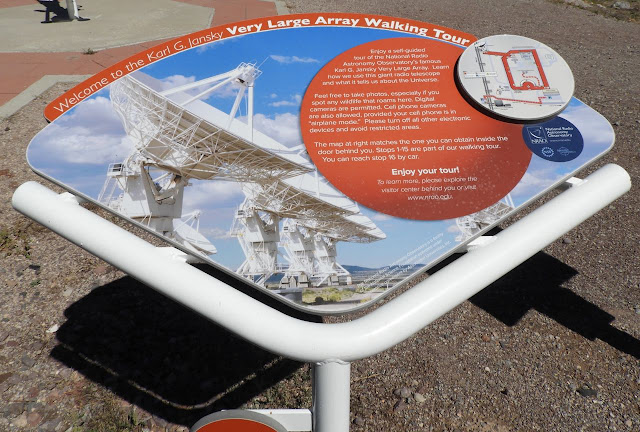 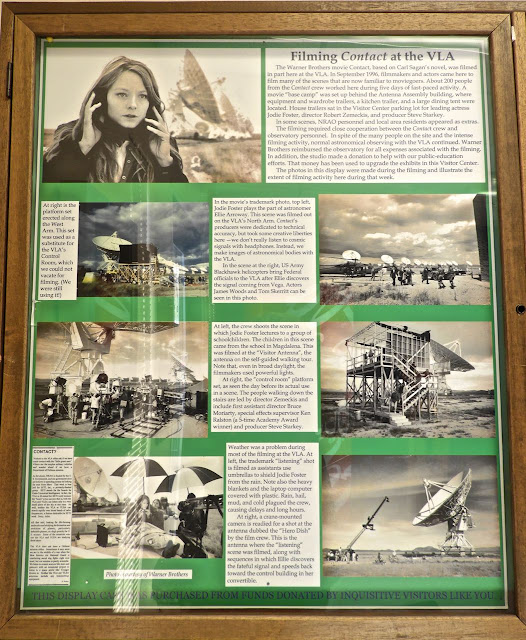 Warner Brothers paid for all expenses and made a donation to the facility to help with public education efforts.  It was used to upgrade exhibits in the visitor's center and around the site.

The poster to the left had pictures and information from the filming.  The film producers were dedicated to technical accuracy but, they did take some creative liberties.  The scientists at the VLA do not listen with headphones.  They make images of astronomical bodies instead. 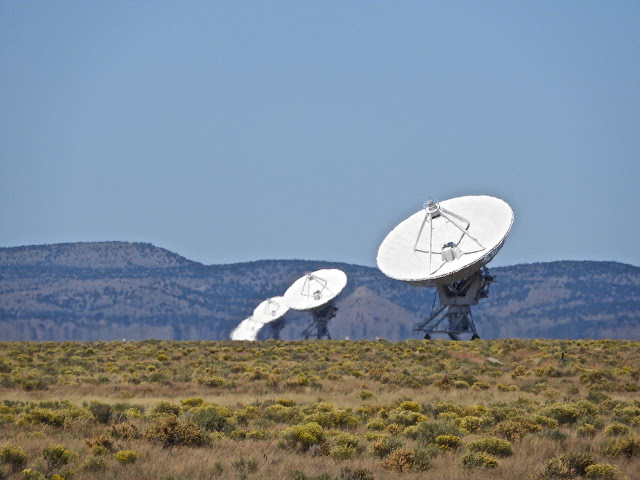 The VLA is operated by the National Radio Astronomy Observatory (NRAO) and scientists working there are mostly looking for life-forming molecules and studying the formation and evolution of planets, particularly habitable planets.  The search for extraterrestrial life is left to the SETI Institute  which was founded by Carl Sagan and Frank Drake. 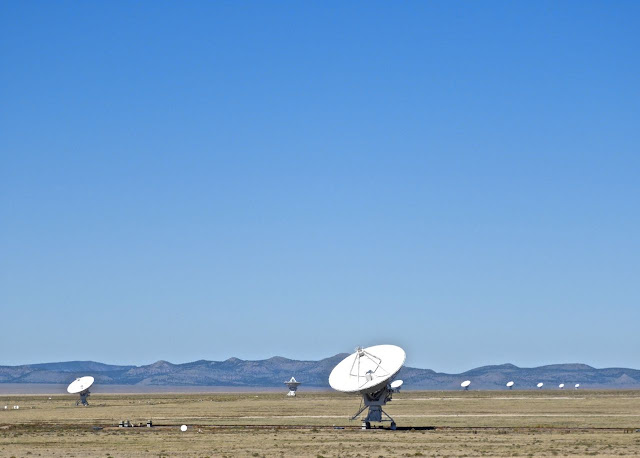 There are 27 of these radio telescopes and they are spread out in a "Y" shaped configuration spread over 22 miles.  Scientists change the configuration approximately every 3 months.  They can be all clustered together covering less than a mile to the full span of 22 miles which is how it was configured when I was there. 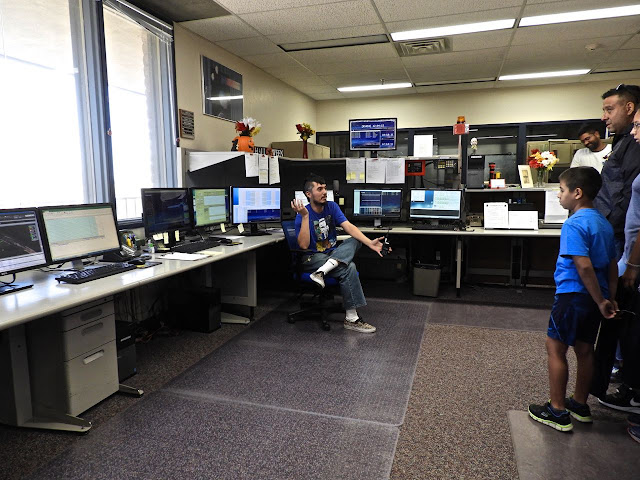 I chose to visit on the first Saturday of the month when the VLA has an open house with guided tours.  The tour took our group into the control room where the scientist on duty talked to us about what he does while watching to make sure the telescopes are working together and sending data to the super computer next door. 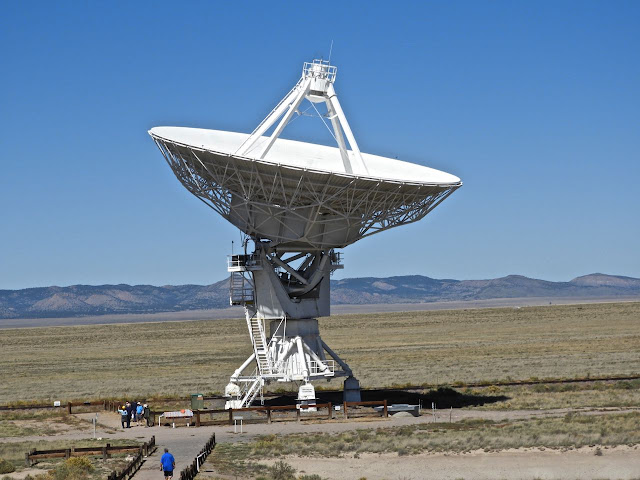 Each of the radio telescopes are 10 stories high and weigh 230 tons.  The one above is set up closest to the visitor's center so visitors can walk right up to it.  I was particularly thrilled to stand under it and watch as scientists in the control center changed the direction of it's huge dish.  It was amazing to watch.

It looks huge and it is huge when I look at the people on the pictures next to the radio telescope(s).
Connected together and working together to get the informations I presume. What a thing!

This looks like a very interesting place to visit, especially since you can get up so close to one of the radio telescopes.

Oh wow! What an experience Sharon. How exciting it will be when they have definite proof of life on other planets, there must be some.. and probably far more intelligent than we are 😁 Amazing to see the size perspective in last shot.

It is, indeed, an amazing site.