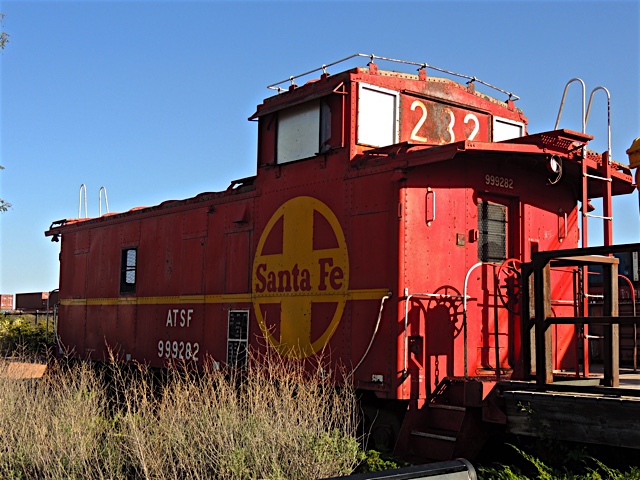 Last spring I traveled to Winslow Arizona to spend the night at the historic La Posada Hotel.  I wrote about the hotel here.  The town of Winslow is located in the north east of Arizona in Navajo County right on Interstate 40 and on one of the main railroad lines through the state.  In fact, the railroad has played an important role in the town ever since. 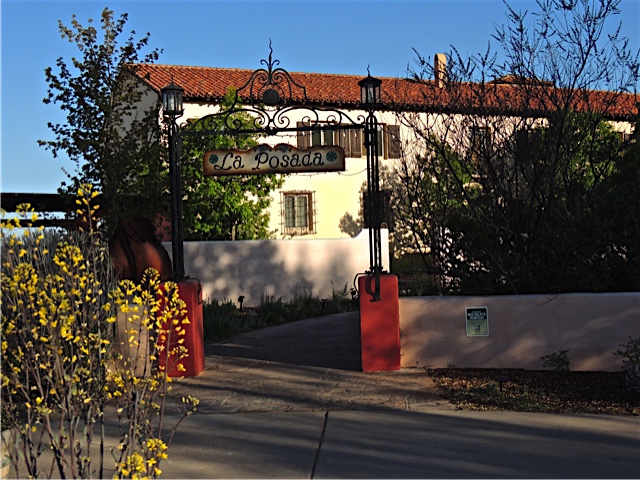 As I explained in that earlier post, the Las Posada Hotel was built as one of the many Fred Harvey Houses that ran through the southwest along the Santa Fe Railroad line. 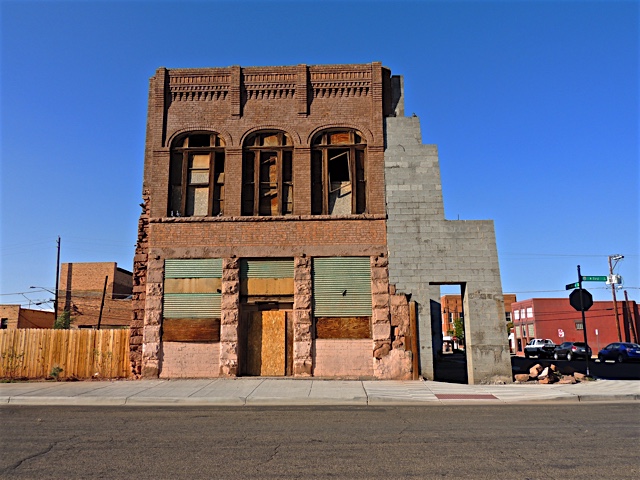 Today the town is a sleepy place that serves both traffic from the interstate and traffic from the BNSF Railroad line that passes through.  The traffic on the highway is constant and so is the traffic on the railroad line with one freight train after another passing through all day and all night.  The only passenger train that passes through is Amtrak.  One westbound train in the evening and one eastbound train in the morning.  In fact, a few of the guests at the hotel were waiting for those trains. 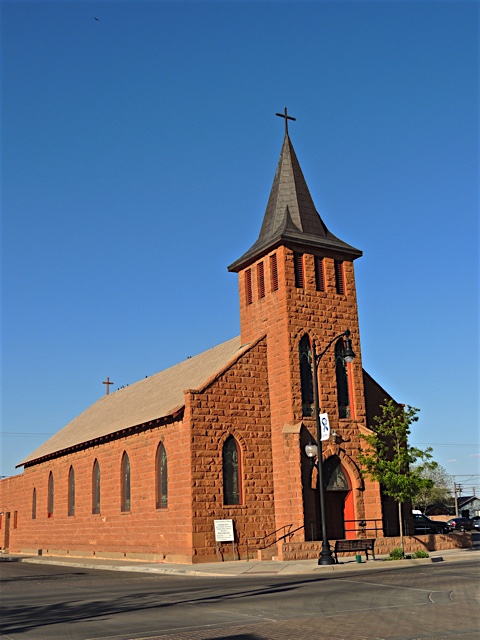 There are two stories to how the town got it's name.  One says that it was named for a prospector by the name of Tom Winslow who lived in the area.  The other story says it was named for Edward F Winslow, President of the St. Louis and San Francisco Railroad.

I like to think it was named for both of them. 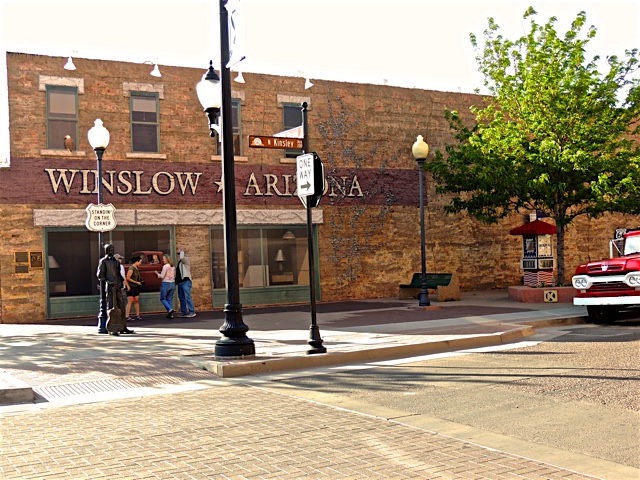 Today many tourists stop in Winslow to get a photograph of the guy "Stand'n on the corner in Winslow Arizona". 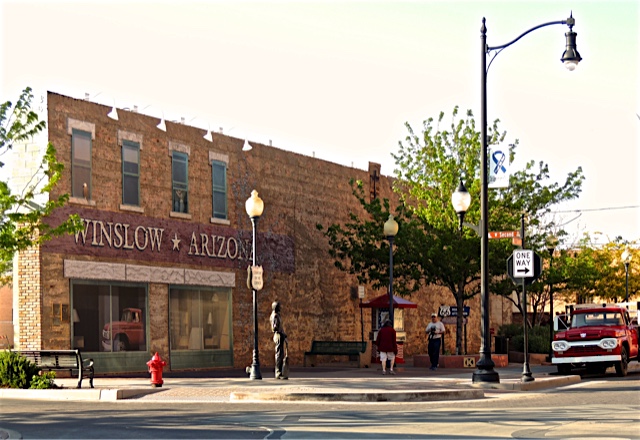 He's been standing there for quite a long time waiting for that girl in the flat-bed Ford to drive by.  Who would have thought that a line from a song by the Eagles would inspire an attraction that draws  hundreds of travelers every day.  Take it easy folks!
Posted by Sharon at 1:00 AM 8 comments: 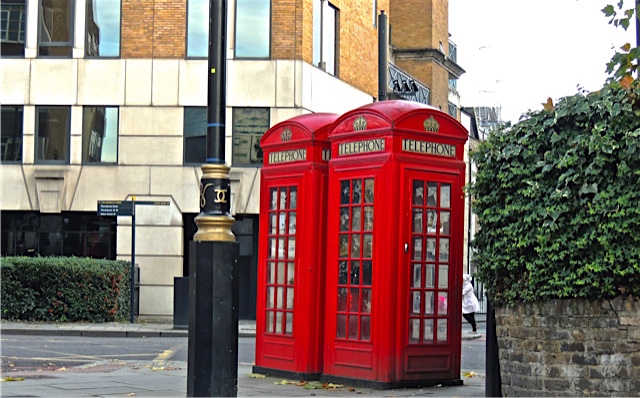 If you close your eyes and imagine you are standing in London, I'll bet there is something red in the scene you are picturing.  Red is a color that seems to dominate the streets.  Here we have two of those iconic red phone boxes pictured above.  Sadly, they are slowly disappearing but there are still plenty on the streets to see. 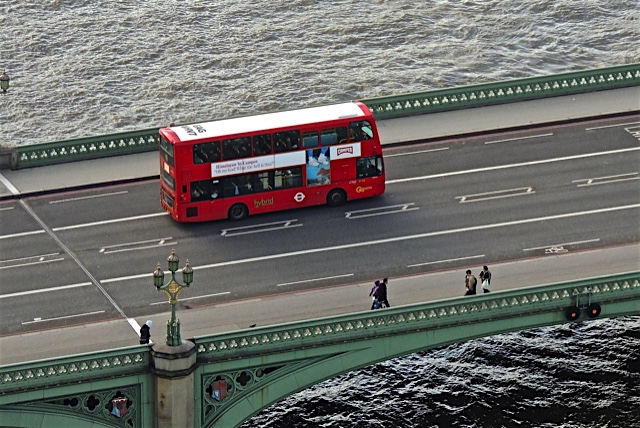 And of course, there are those wonderful double-decker buses.  You will see them everywhere all of the time. 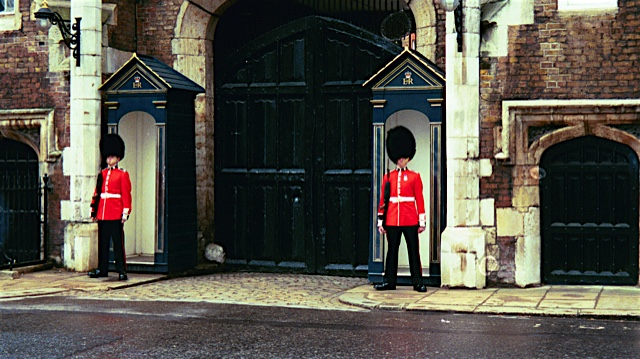 And, let's not forget the wonderful royal guards in the snappy red coats and tall black hats. 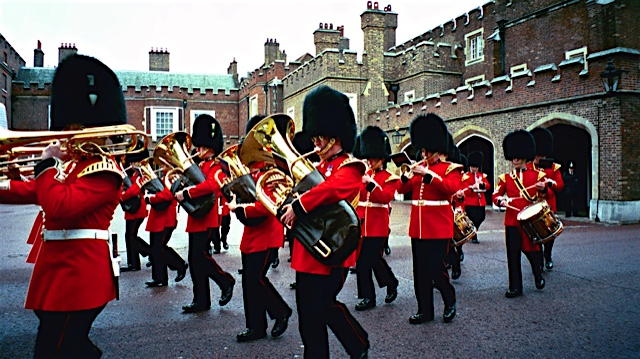 The same goes for the royal band that marches out for the changing of the guard ceremony. 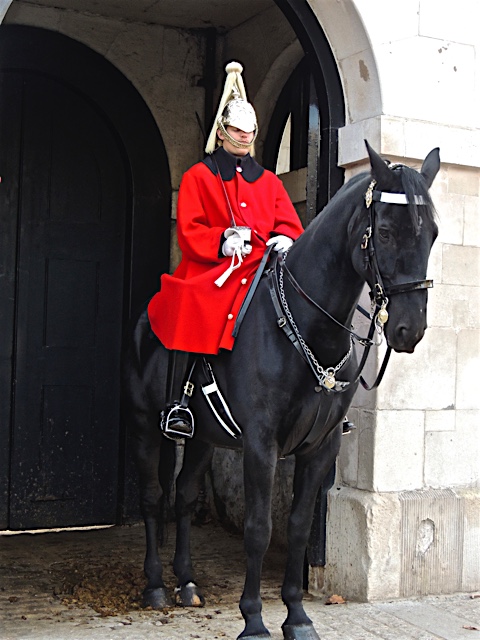 Over on Whitehall Place, you can find the Horse Guards on duty and in the winter months they don long red coats. 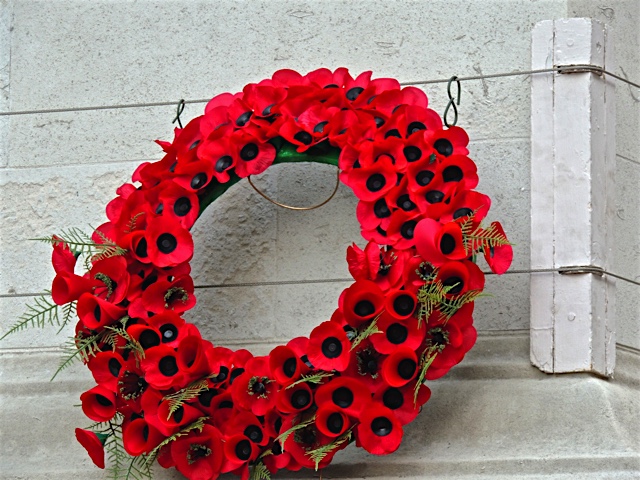 If you happen to be in London in November you will see plenty of red poppies for  Remembrance Day.

Red is everywhere in this great city.
Posted by Sharon at 1:00 AM 9 comments:

Sending Love to the City of Light 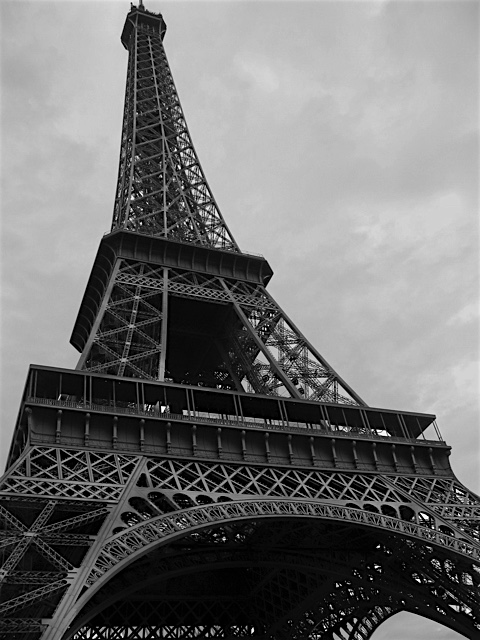 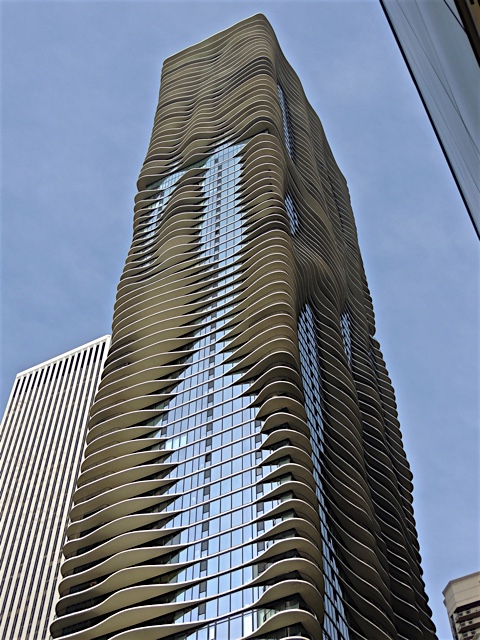 The last time I visited Chicago was the first time I got to see this award winning high-rise building called simply "Aqua".  I was very impressed with the look of this building.  So much so that I did some research on who designed it and I was amazed to find out that the architect was Jeanne Gang of Studio Gang Architects.

It turns out that this building is the tallest high-rise building designed by a woman in the United States.  And what a design.  The building was designed with balconies of different shapes and sizes creating an undulating, almost liquid effect.  Because of that design, the base of each floor of the building is a different size and shape.

The building was completed in 2009 and that same year it won the Emporis Skyscraper Award. 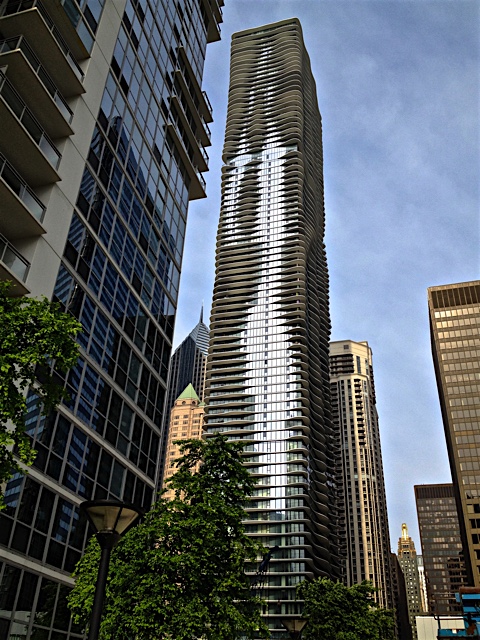 The building contains a Radisson Blu Hotel, condominiums and apartments.  I checked and those apartments run anywhere between $1400.00 to $4000.00 a month.

One interesting note is that each site I visited to gather information for this post listed a different number of floors in this high-rise.  One said 84, another said 87 and still another said 82.  I wonder which is correct. 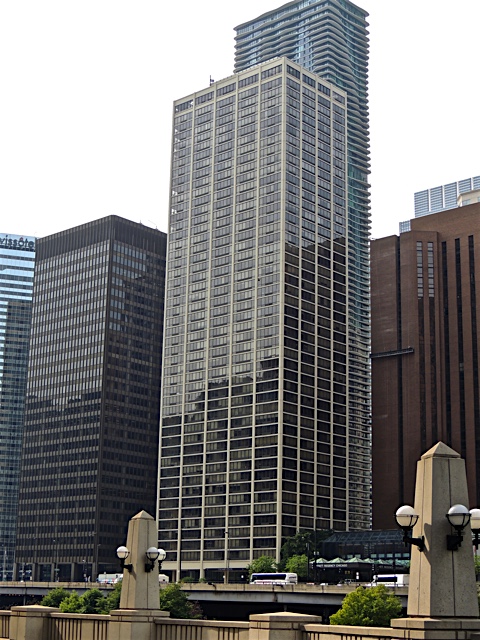 When I was working a 2-year contract in Chicago back in the late 90's, I lived in this building.  I had a gorgeous one bedroom apartment facing south and east with views of Grant Park, Lake Michigan and the Chicago River.

The new Aqua building is now right behind where I used to live.  You can see it peeking out behind this building. If I still lived in that same apartment, my windows would now be looking right at it.
Posted by Sharon at 1:00 AM 8 comments: 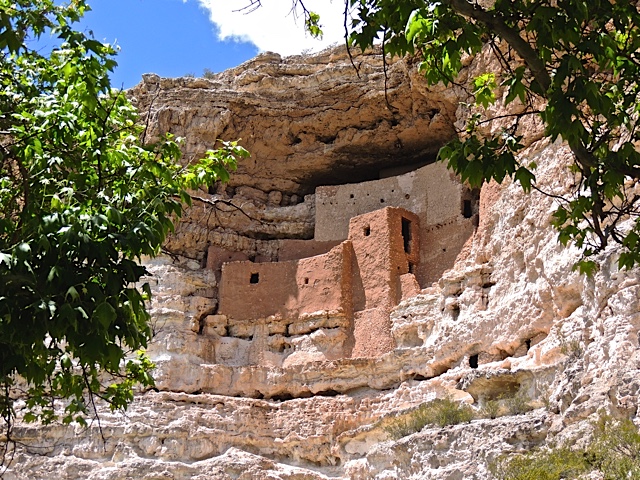 Montezuma Castle is one of the best preserved cliff dwellings in America.  In 1906 President Theodore Roosevelt designated it and three other places as the very first Historic Monuments in the Untied States.
When it was discovered in the 1860's by vagabond miners, they misnamed the place after the Aztec emperor Montezuma and although it had nothing to do with Aztec peoples, the name remains.  In fact, the people who live here were of the Sinagua Culture. 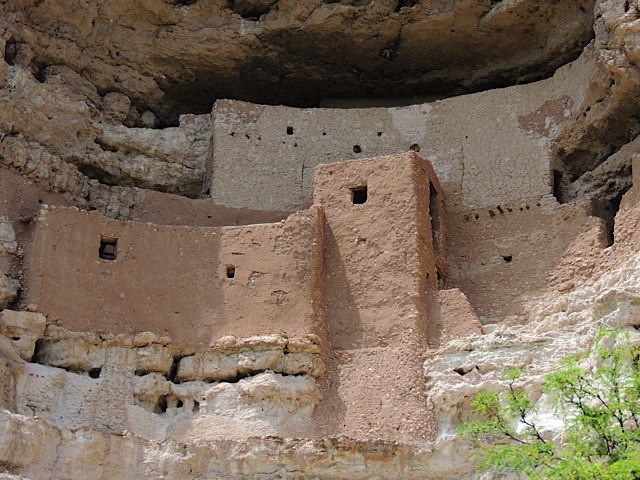 The castle is actually a 20-Room high-rise apartment building built into the towering limestone cliff.  Much of the artifacts left by the people were scavenged long before historians arrived on the scene.  There was enough remaining for archaeologists to learn about the people who lived here some 800 years ago.  It is thought that this place along Beaver Creek was inhabited by the Sinagua people for between 300 and 400 years before they left the place. 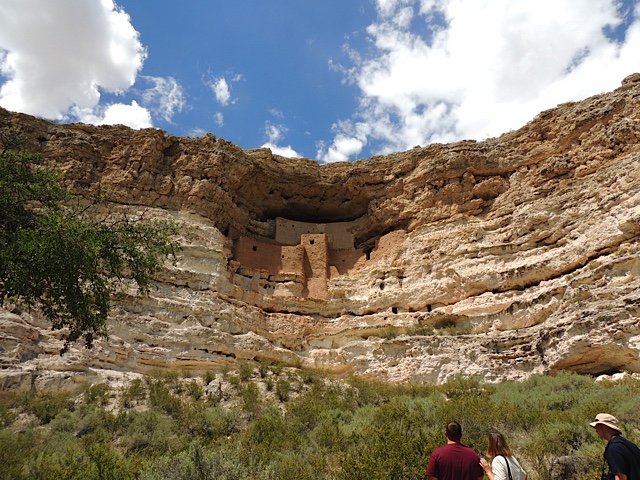 Following the path along the creek and looking up at the castle is a spectacular sight.  It opens the imagination to wonder about how these people lived in such a remote area of northern Arizona, building such a magnificent dwelling and hunting, fishing and farming in the valley below them.   An even greater wonder is how this wonderful dwelling has survived some 800 years.

If you are driving between Flagstaff and the Phoenix area, it is well worth a stop here to gaze upon this magnificent piece of history.
Posted by Sharon at 12:00 AM 7 comments: