Home of a Victorian Artist 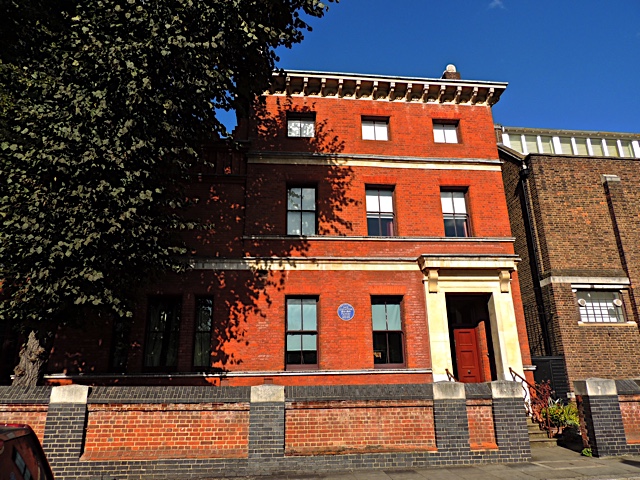 I'm not sure how I heard of Leighton House but it was on my list of places to visit while I was in London so on one of the gloriously sunny days I recently spent in the city, I made my way to Holland Park to visit the home of Frederic, Lord Leighton. 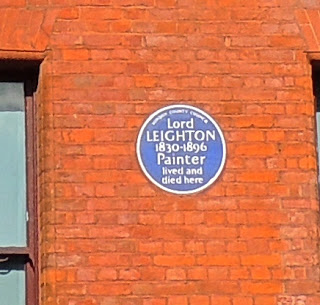 Leighton's home bears the famous blue plaque, a historic designation and is operated as a museum.

Photography was not allowed inside the house, a point that was made very clear to me probably because I had a camera hanging front and center around my neck. 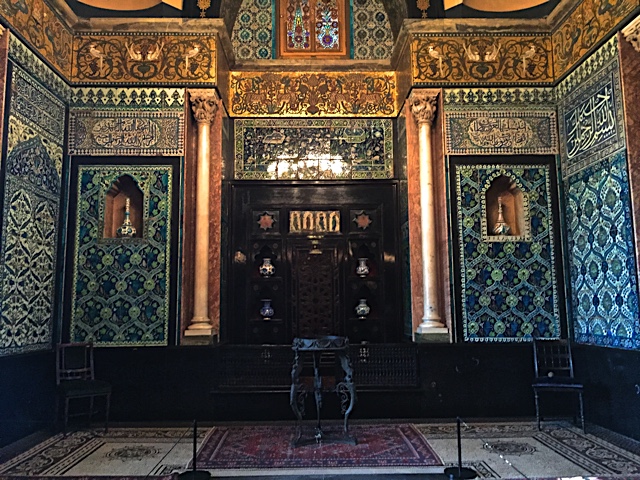 However, not being one to follow all the rules, I did manage to snap two shots inside the house using my cell phone in a stealthy sort of way.  (After all, there are dozens of photos on the internet, just Google Leighton House and look at the images.)  This room on the ground floor is called the Arab Hall and is covered with beautiful Arabic and Islamic tiles.

The home was designed by architect George Aitchison guided by Leighton's precise specifications.  It was built to be an artist's home with a studio at the back of the house, facing north with floor to ceiling windows to allow in as much light for the painter to work with natural light flooding the room.  I wish I could have gotten a photo of that room, it was beautiful but carefully patrolled by museum guides.

The second photo I took was from the stairway looking down into the Arab Hall and the entrance foyer in front of it. 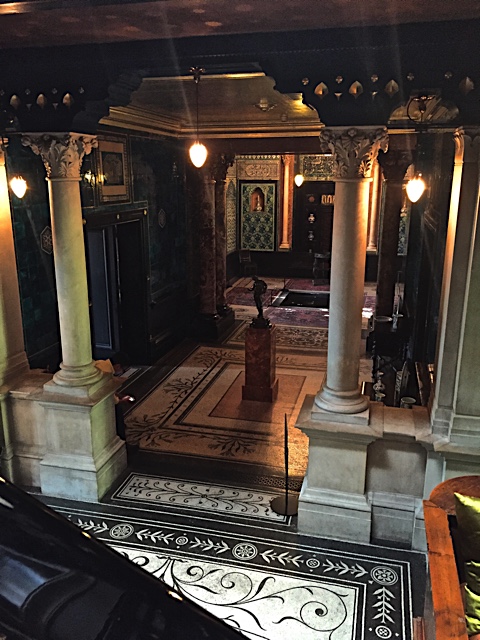 If you haven't heard of Leighton the artist you might want to check this link to see his most famous painting called "Flaming June".  I've never seen that painting in person but, I've seen many a photo of it, especially in art gallery gift shops.

The painting belongs to the Museo de Arte de Ponce in Puerto Rico.

While I was at Leighton House, I heard one of the guides mention the the painting was on it's way to London for a temporary exhibit at Leighton House from November 2nd 2016 to April 2nd 2017.  So, if you are a reader who will be in London during that time, I would recommend you go see it.  You will get to see the artist's fabulous home and his most famous painting all in one visit.  Here is a link to an article about the painting and it's upcoming visit to London.  The article tells quite a story surrounding that famous painting.
Posted by Sharon at 1:00 AM 3 comments: 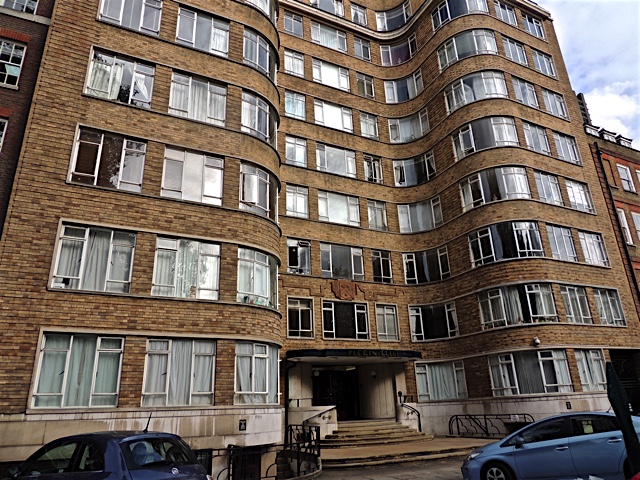 If you happen to be a fan of the detective series that aired on television between 1989 and 2013 called Agatha Christie's Poirot, you will be familiar with this building.  This is the building that was used for all the exterior shots of where Hercule Poirot lived in London.  Being a huge fan of the art deco era in building and design, the look of this building always appealed to me.  I also thoroughly enjoyed David Suchet's portrayal of the eccentric detective with the waxed mustache and those busy "little grey cells." 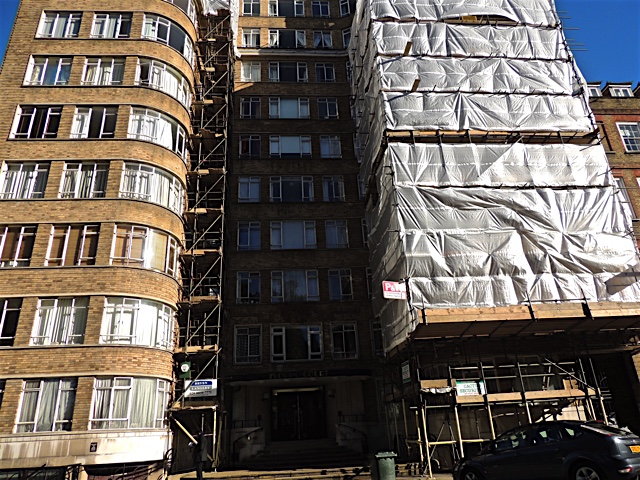 When I went to London back in 2013, locating and photographing this building was on my list of things to do.  However, when I got there I was dismayed to find the front of the building covered in scaffolding because of renovations.  Oh well, I snapped the above photo anyway. 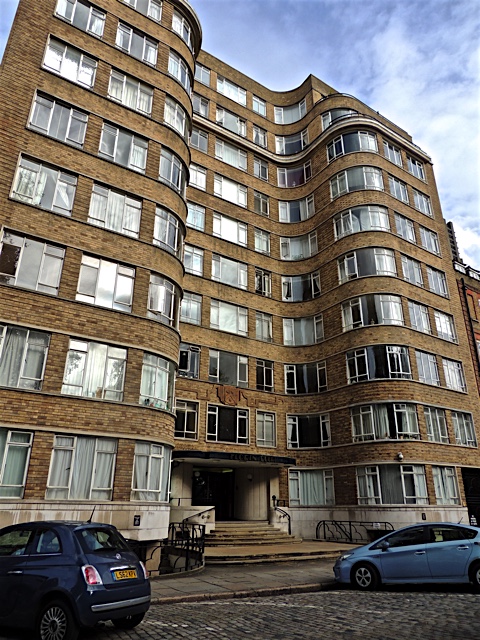 So on this most recent trip to London I decided to try again and I was happy to find the front of the building clear of all construction and I was able to snap a few photos. 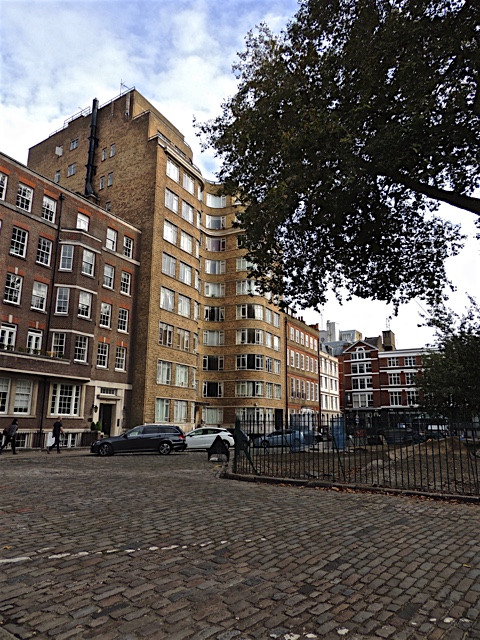 Oh well, such is my luck.  The top photo and this one and the one above will have to do. 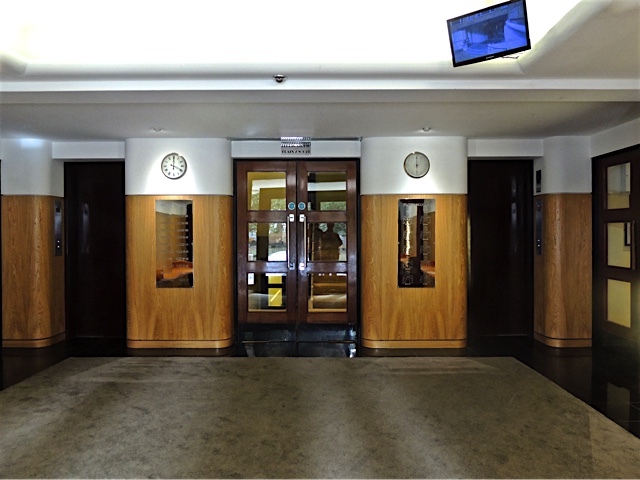 I did manage to walk up to the front and snap this photo through the door.  I was very pleased to see that the lobby of the building has maintained that 1930's art deco style that I recall seeing portrayed in the television series.  Everything looks so incredibly vintage with the exception of that security monitor in the upper right corner.  I'll just pretend it isn't there.
Posted by Sharon at 1:00 AM 10 comments: 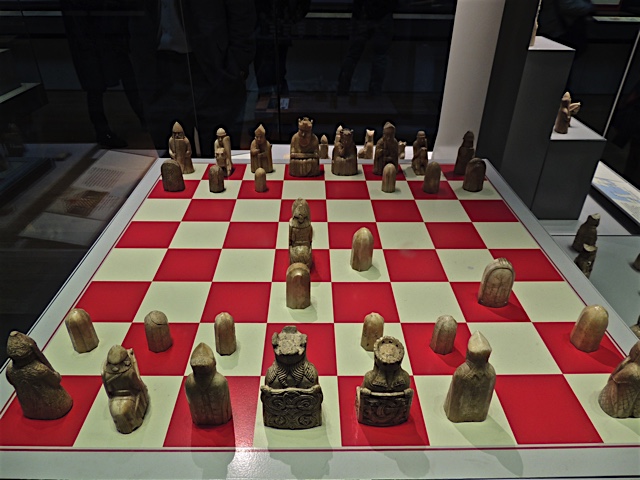 Of all the towering statues and Egyptian sarcophagi, I found myself most intrigued by this small little treasure when I recently visited the British Museum.  The Lewis Chessmen are a group of 12th century chess pieces that were discovered in 1831 on the isle of Lewis in the Outer Hebrides in Scotland.  They make up the most complete surviving medieval chess sets in the world. 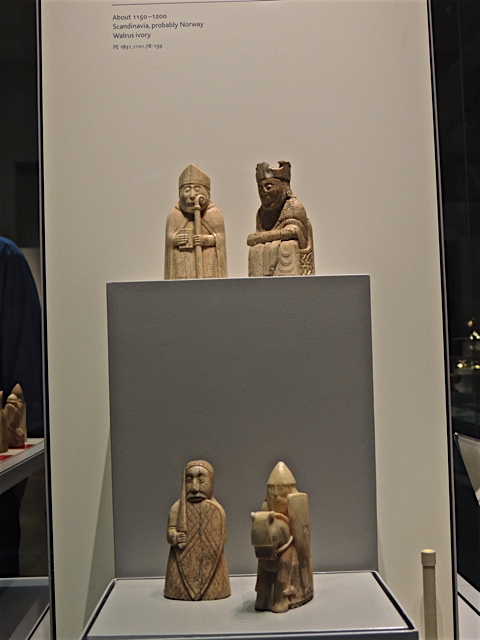 The museum thinks the chessmen were probably made in Trondheim Norway sometime in the 1100's. They are carved mostly of walrus ivory with a few pieces made from whale teeth. 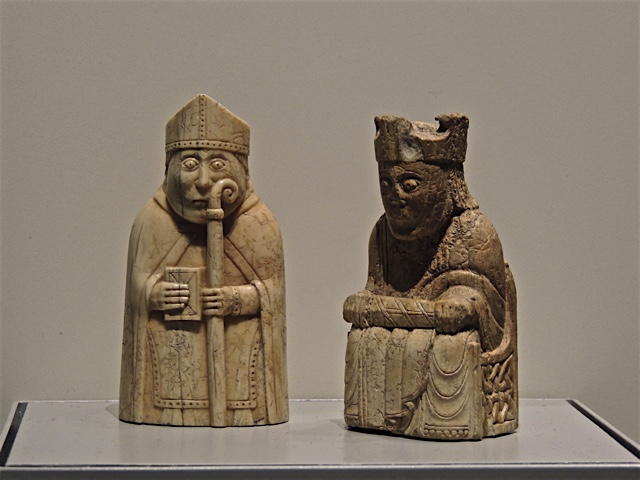 I'm not a chess player so I'm not quite sure why these little chessmen drew so much of my attention.  It probably has more to do with the age of the set and the details in the carvings and the fact that a game that is popular today has it's roots so deeply imbedded in history. 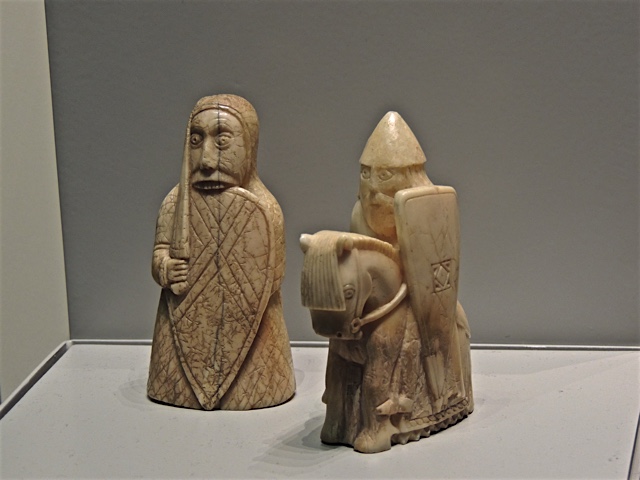 The chessmen in the set reflected the order of feudal society and the game was devised to sharpen the tactical skills of knights.  It became one of seven knightly accomplishments. 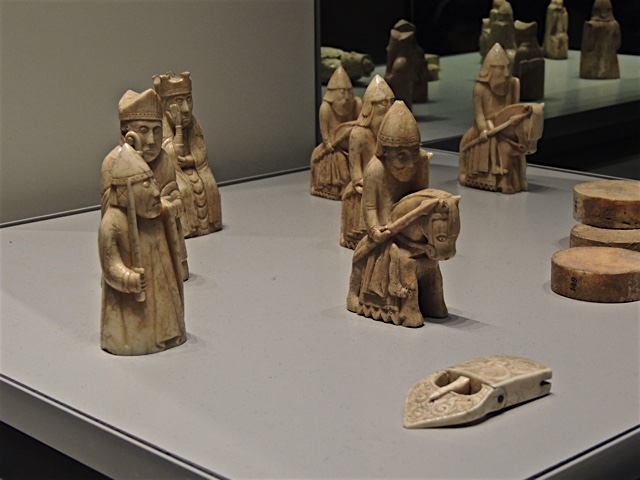 One of the information cards at the museum said that this set is one of the most popular and well traveled of it's exhibits.  Pieces from the set have traveled all over the world for different exhibitions. I had it all to myself for quite a while.
Posted by Sharon at 1:00 AM 6 comments: 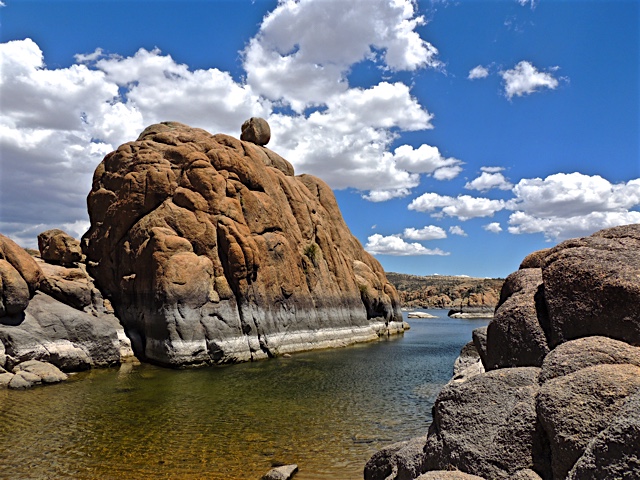 Two years ago, my sister Judy and I took a drive out to Watson Lake located in an area called the Granite Dells.  It's a beautiful spot full of amazing rock formations and a wonderfully refreshing lake.  The lake was formed after a dam was built on Granite Creek.  Since that time, the city of Prescott Arizona bought the land in order to preserve it as a recreational spot. 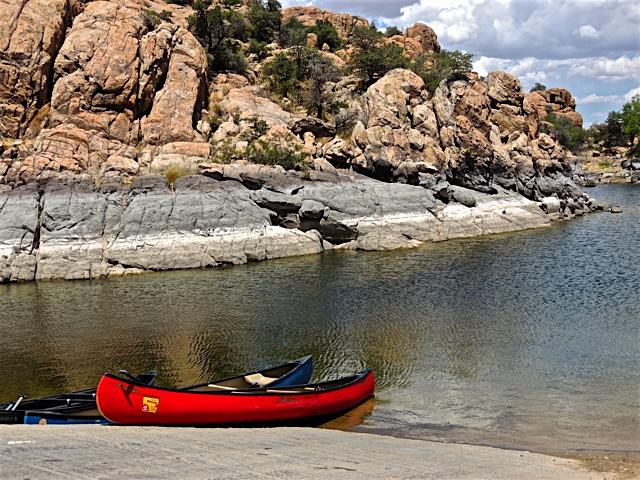 Visitors can rent a canoe and enjoy a day paddling around the lake or they can use the rocks to practice their rock climbing skills. 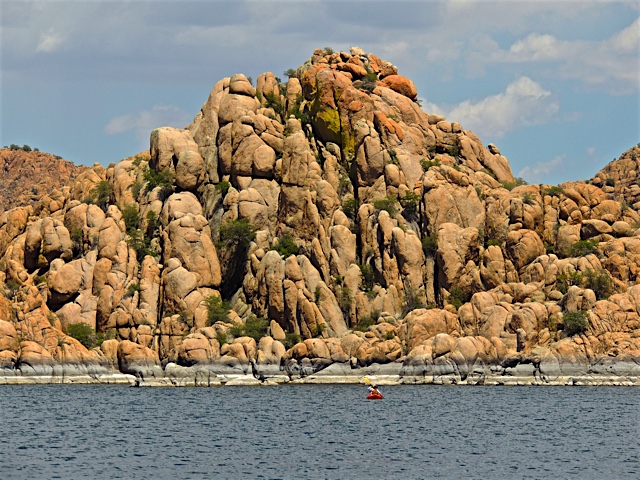 Judy and I just like to take our cameras and capture the unique beauty of the place. 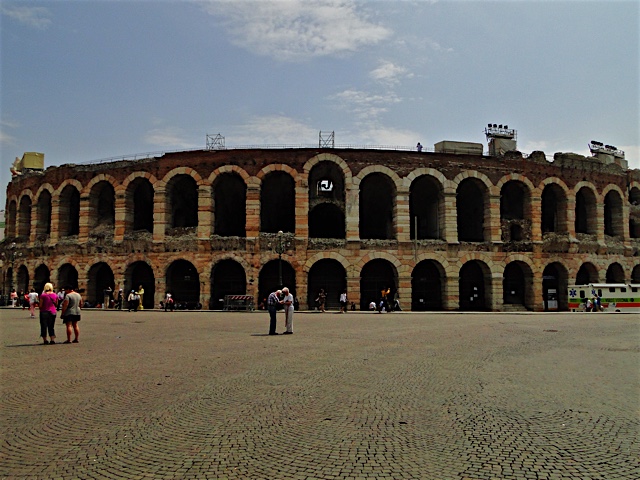 The ancient arena in Verona Italy is certainly a tribute to the architects who built it because this one is  still in use today.  Built in the first century, it has proved itself to stand the test of time. 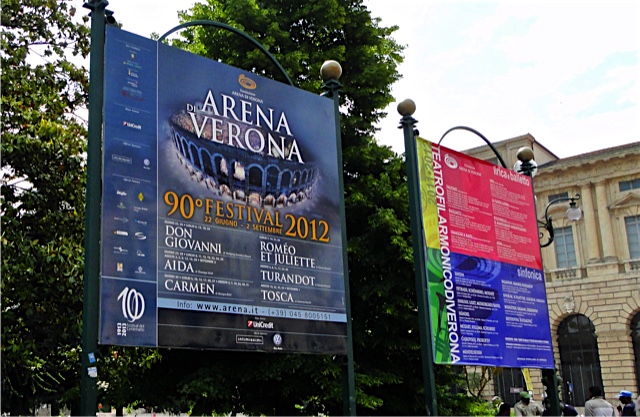 As you can see from the sign above, there is a schedule of operas that were being performed here back in 2012 when I last visited.  In fact, the arena is known for its grand scale opera productions but, word has it that a few rock concerts have also used the venue from time to time. 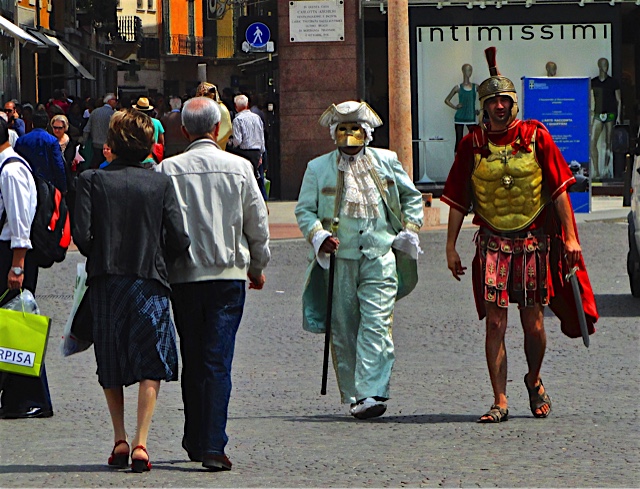 Oh look, I think I see some actors headed that way right now!