Sphere Within a Sphere 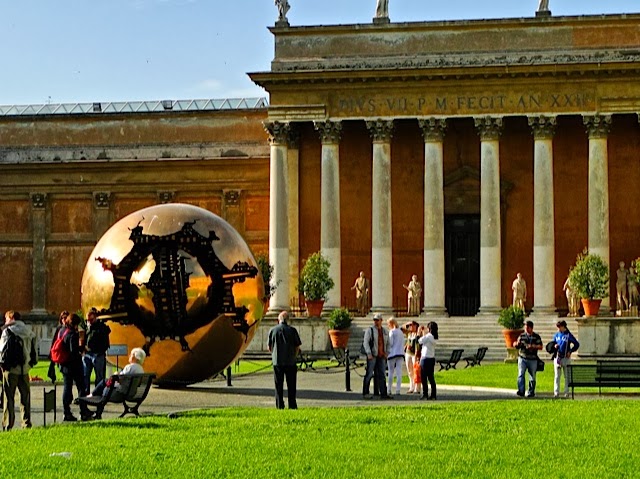 The sculpture titled “Sphere Within a Sphere” by artist Armaldo Pomodoro sits in the courtyard area of the Vatican Museum.  Or should I say, one of the sculptures of that name is located there.  It was originally made for the Vatican but it seems the artist made many versions of this sculpture after the first was complete and you can find them all over the world in places as unlikely as the Des Moines Art Center and the Tehran Museum of Contemporary Art.  There appear to be many artistic interpretations for sphere but none that I found actually voice the artist thoughts.  The one that seems to dominate is about how the world can be torn asunder with wars and disasters and it somehow comes back as a better and more fruitful place.  Let’s go with that description rather than the one that says it signifies how the world will be torn apart by technology.
Posted by Sharon at 1:00 AM 3 comments:

Email ThisBlogThis!Share to TwitterShare to FacebookShare to Pinterest
Labels: Italy, The Vatican 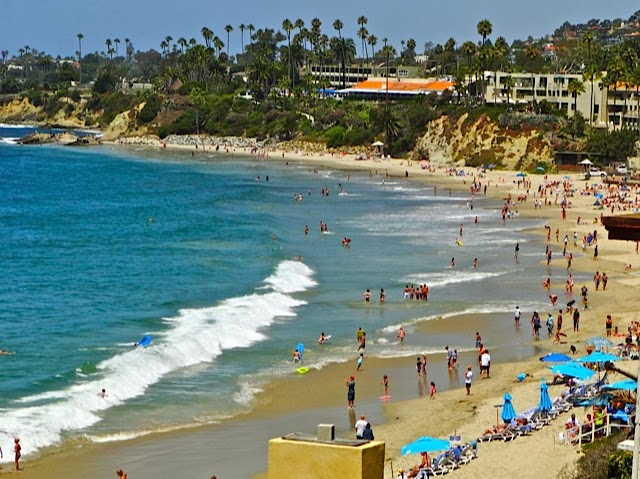 Laguna Beach California is the perfect getaway place especially for Arizonans who suffer through the long and very hot summers.  Around about August, we desert dwellers have had our fill of searing hot temperatures and are looking for places to cool off.  The beautiful city of Laguna Beach fits the bill just perfectly.  There is plenty to do with two art festivals going on and the awesome “Pageant of the Masters” event running all summer long.  There are also plenty of art galleries to explore, restaurants to try, and endless shopping possibilities.  And of course, the beach!
Posted by Sharon at 1:00 AM 7 comments: 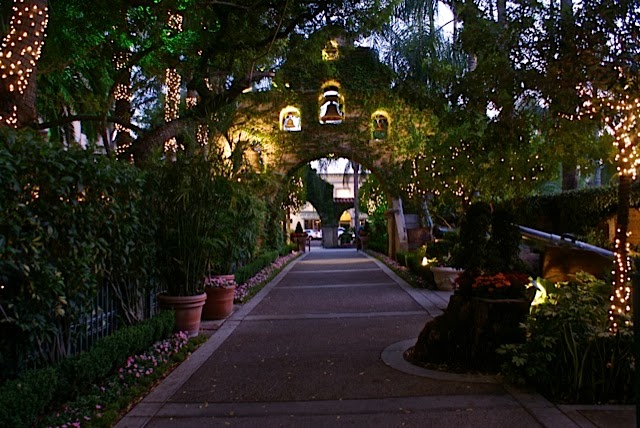 The eye-catchingly picturesque Mission Inn in Riverside California has been a cornerstone of the city since 1876.  In the beginning it was just a 12 room guest house but the increasing influx of tourists to the area prompted the owner, Frank Miller to expand and, expand he did.  The first wing was built in 1903 in Mission-Revival style and three more wings would follow until 1931.  Each expansion incorporated architectural and structural elements of the 21 California missions.

Two years ago, I had the opportunity to stay here and I took cameras and the tripod with me to capture the beauty of this place.  The top photo shows the beautiful entrance to the hotel with the mission bells over the archway.  The photo below shows one of the roof top patio areas with a peaceful reflecting pool and pots overflowing with flowers.  All of that is surrounded by the arches and domes of the mission architecture.

The Mission Inn has of course hosted many famous guests from presidents to rock stars.  Richard Nixon and his wife Pat were married here and Ronald and Nancy Reagan honeymooned here.  Even Miss Piggy is on the VIP list of guests.

I have many photos from here showing to beautiful architecture so I'll post more in the future. 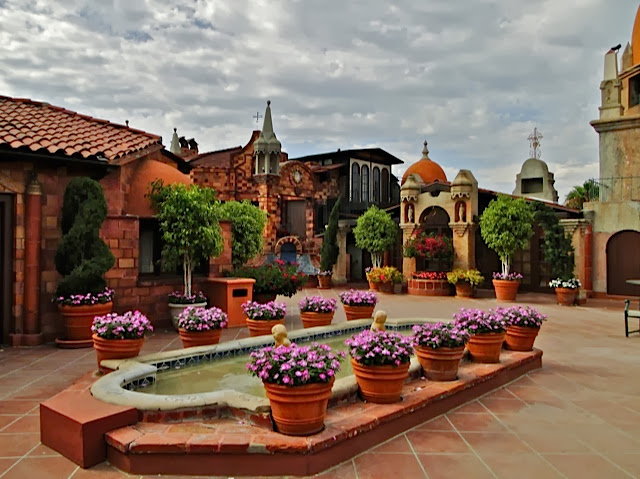 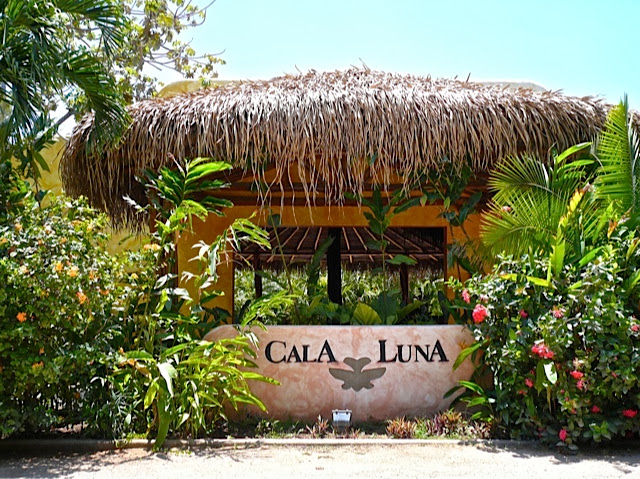 When I went to Costa Rica with Julie of Scottsdale Daily Photo one of my favorite dining places was at the Resort called Cala Luna.  We had lunch there twice while we were there.  It was conveniently located within walking distance from their Langosta Beach condo.  If you follow Dave’s (Julie’s husband) blog (Tamarindo Costa Rica), you’ve seen his photos from there. 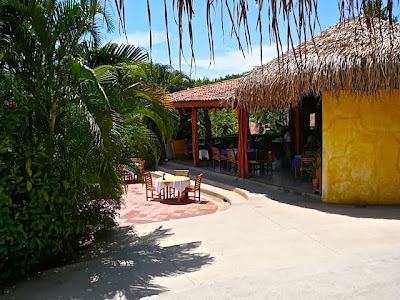 The food was great here but, I have to say the margaritas were the best. 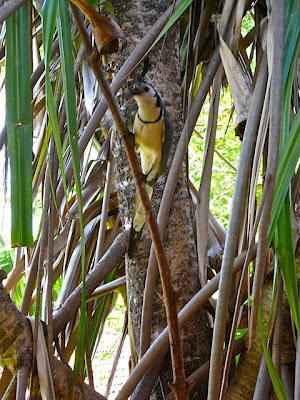 On one of the lunch occasions, this gorgeous Magpie was perched just outside the open window next to our table and checking to see if we might have a handout.
Posted by Sharon at 1:00 AM 7 comments: 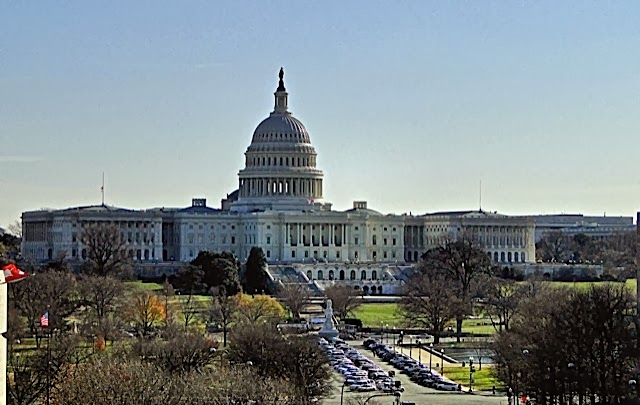 Sitting atop Capitol Hill is this grand building where the United States Congress meets.  Historically, a lot of things have been accomplished in this building.  Unfortunately, not much was accomplished there in the year 2013.  I took the above photo standing on a balcony of the “Newsium” the new museum of news in Washington DC.  The view from there was spectacular. 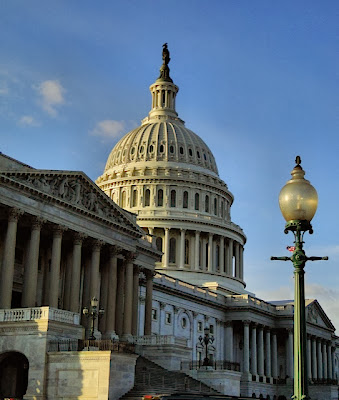 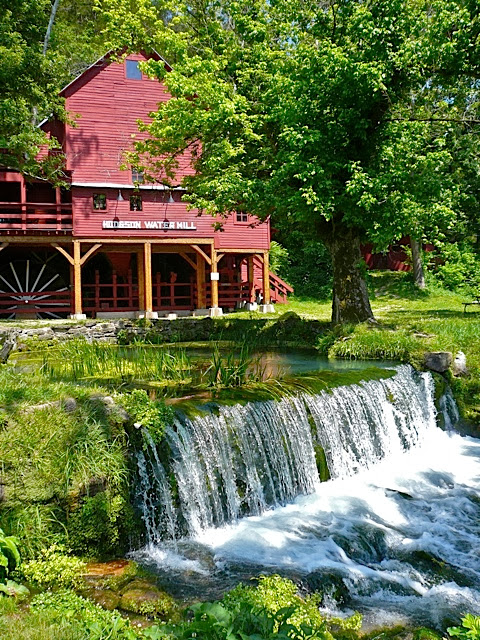 On the edge of the Ozarks in southern Missouri and on a beautiful country road is this historic mill.  A mill was first built here in 1837. It was rebuilt in 1897 by Alva Hodgson, a master millwright, and it was built to harness the power of a huge spring flowing into a Bryant creek.  Unlike most stone gristmills that were shuttered, Hodgson Mill kept producing quality wholesome, whole-grained products well into the 1970’s.  The tiny mill was straining to keep up with the demand for its products so new modernized facilities were built.  The mill is now listed on the National Historic Register but the Hodgson Mill products are still being produced. 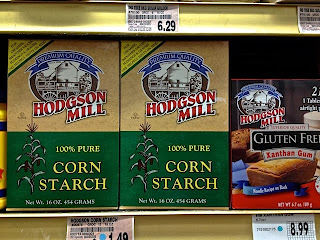 In fact, I’m betting you’ve seen them in your local supermarket or specialty grocer. Ever seen a box or flour sack that looked like this?
Posted by Sharon at 1:00 AM 7 comments: