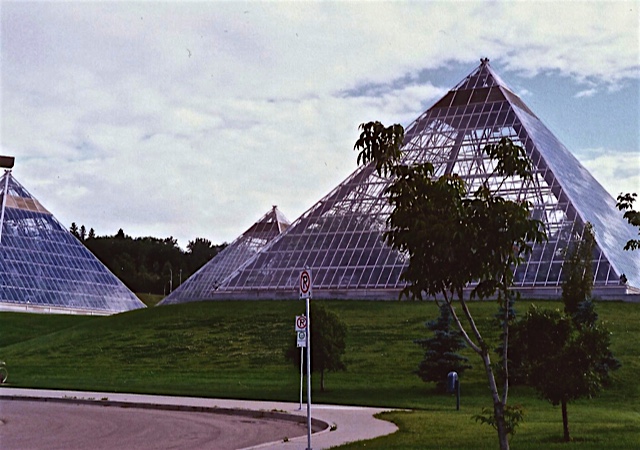 In Edmonton Alberta, the Muttart Conservatory adds a unique shape to the city's skyline.  Four glass pyramids house plants from around the world.  Three of the pyramids feature permanent displays representing the three distinct biomes of temperate, arid and tropical.  The fourth pyramid offers changing exhibits and programs.  A visit to this place is well worth the effort if you find yourself in the lovely city of Edmonton.
Posted by Sharon at 1:00 AM 5 comments:

Before the Latest Flood 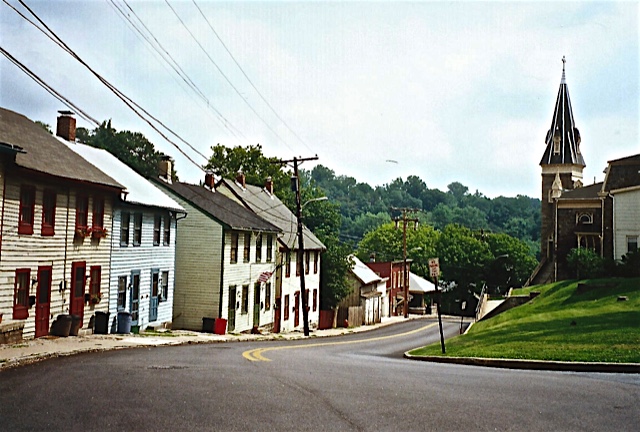 About 16 years ago I visited a friend I had worked with in St. Louis at her home in Ellicott City Maryland.  While I was there I took this picture of the very quaint city center and I noticed how the city sat in beautiful rolling hills.  A few weeks ago I heard a news story that Ellicott City had been hit with a devastating flood.  It's hard for me to think of such a beautiful and historic place being ravaged by flood waters.  When I saw this photo in my files, it reminded me of what a pretty place this was all those years ago.
Posted by Sharon at 1:00 AM 5 comments:

Email ThisBlogThis!Share to TwitterShare to FacebookShare to Pinterest
Labels: Maryland The billionaire mining tycoon who was born in Montana, schooled in the east and in love with the west left a beautiful and enduring legacy in the state of Arizona in the form of the Boyce Thompson Arboretum. 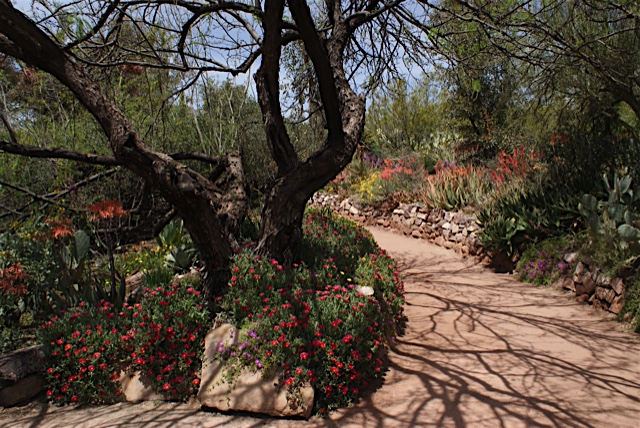 The arboretum is full of a multitude of trails that all offer something beautiful and educational.  There are high trails with spectacular mountain views and low trails with shady areas that make you forget you are in the desert. 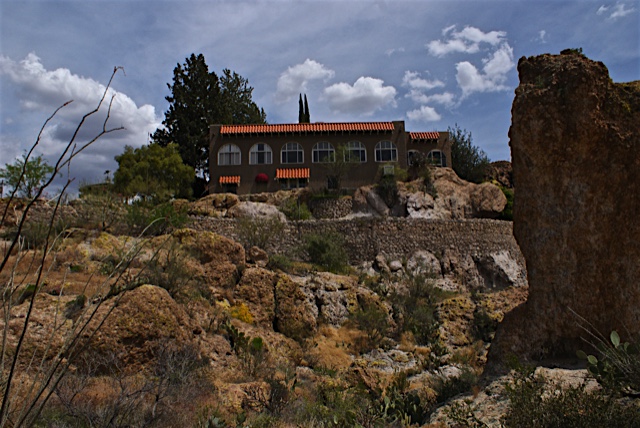 William Boyce Thompson was not a great student in grade school in Montana but he matured after going to school in the east and studying engineering.  He became enamored with the mining industry and began building a career in the industry and in mining investments.  He made his first million in 1906 after investing in mining in Nevada, Arizona and Utah.  In 1907 he purchased the Magma Mine in Superior Arizona and that is where he began his love affair with the high desert area surrounding the mine.  He built a large home overlooking a canyon and made several land swap deals to obtain the property around the home. 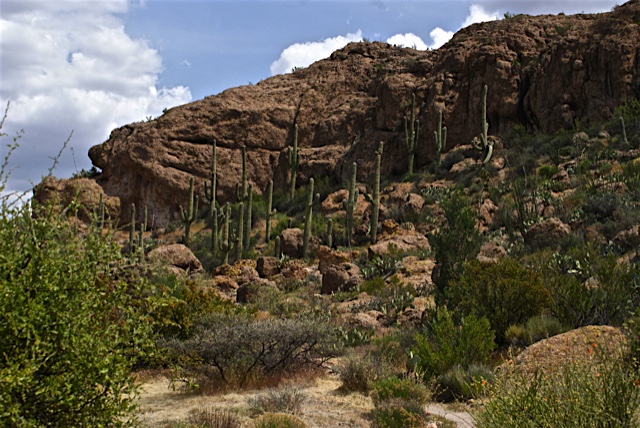 In 1909 at the age of 40 he began his philanthropic endeavors with numerous endowments, scholarships and fellowships.  He hired Franklin J Crider from the University of Arizona to establish the Boyce Thompson Southwest Arboretum.  It survives to this day as an Arizona State Park that continues his educational and preservation directives. There is a huge greenhouse located on the property where plants from arid climates all over the world are cultivated and grown. 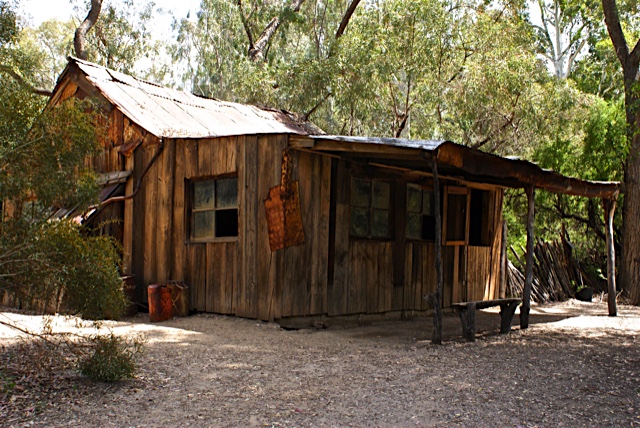 A favorite trail among visitors is the Australian walk-about trail complete with an old and rustic cabin and.... 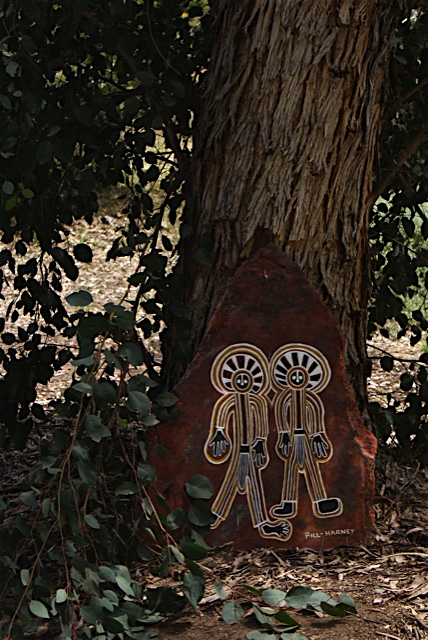 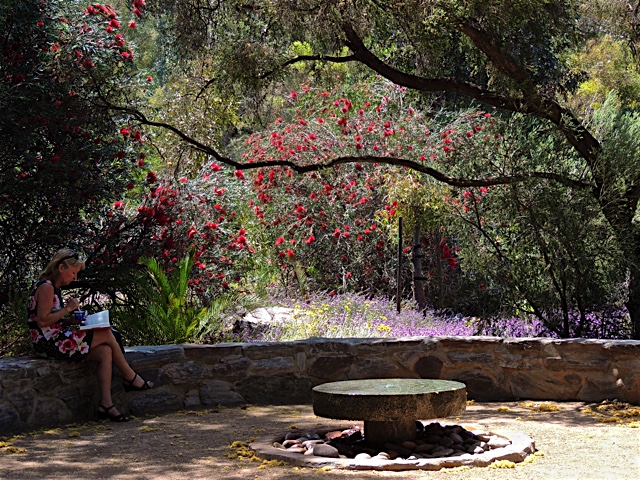 There are quiet places to sit and read among the wildflowers. 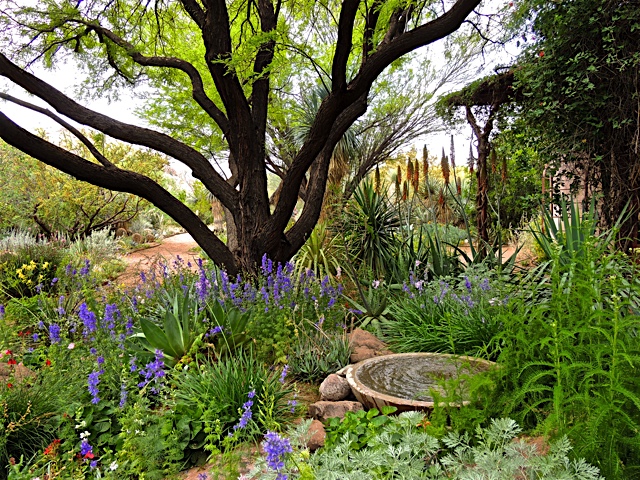 One of my favorite places at the arboretum is the Demonstration Garden where there are several gardens set up in different styles and all suited for arid climates.  The one above was especially beautiful. 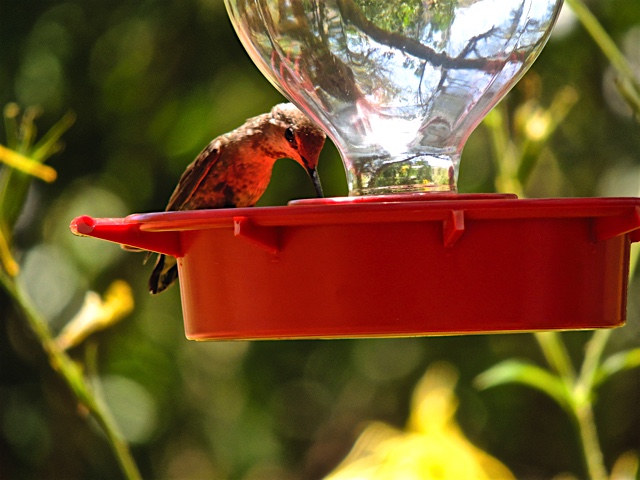 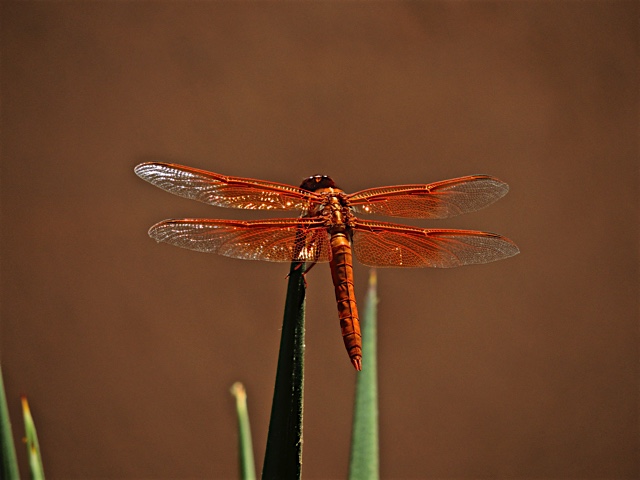 I can sit in that area and enjoy the birds and bees and dragonflies all around. 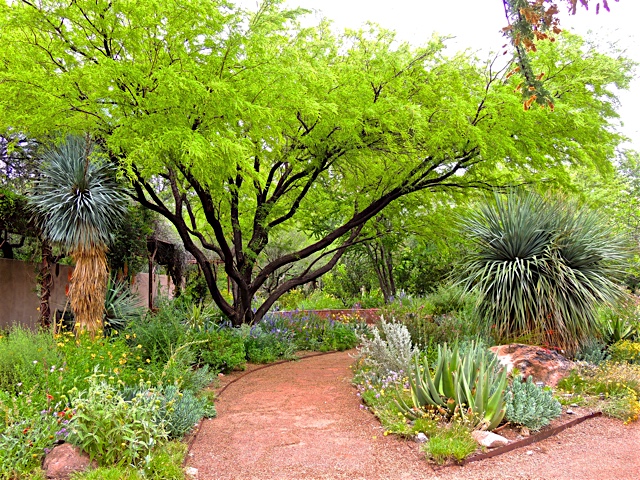 Boyce Thompson Arboretum is located about an hours drive from Phoenix just outside of the mining town of Superior Arizona on the US 60 highway.
Posted by Sharon at 1:00 AM 6 comments: 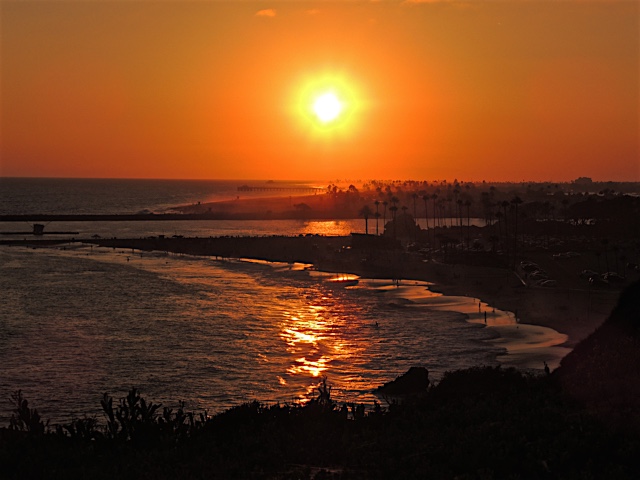 It's a sort of tradition that when I'm visiting in California, at least one time we head over to the Corona Del Mar neighborhood of Newport Beach to watch the sunset.  How colorful it turns out to be depends on the day's weather.  On this day a year ago, it was just hazy enough to filter the sun a bit but still bright enough to color the water. 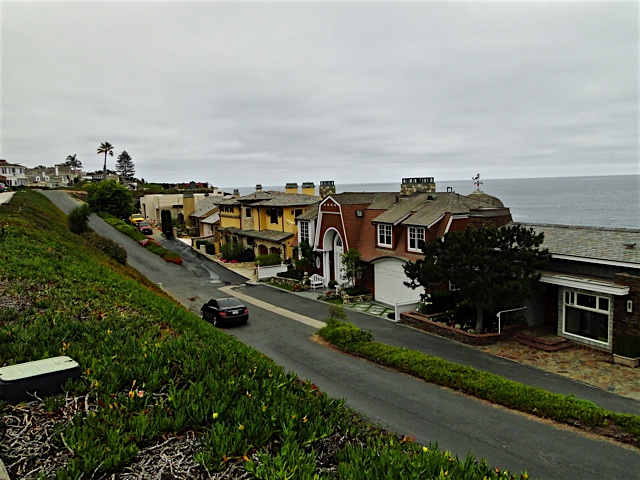 But, watching sunsets is not the only thing to enjoy along this drive.  It's also fun to look at all the houses that have been perched along the coast to take in the maximum benefit of the views. 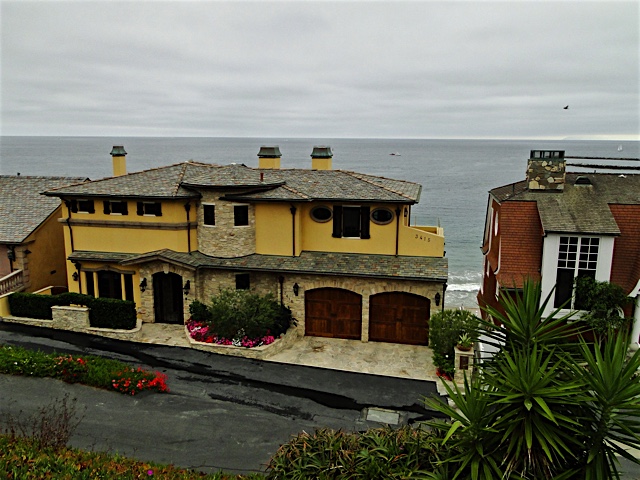 Some of them sit right on the edge making me wonder what keeps them up there. 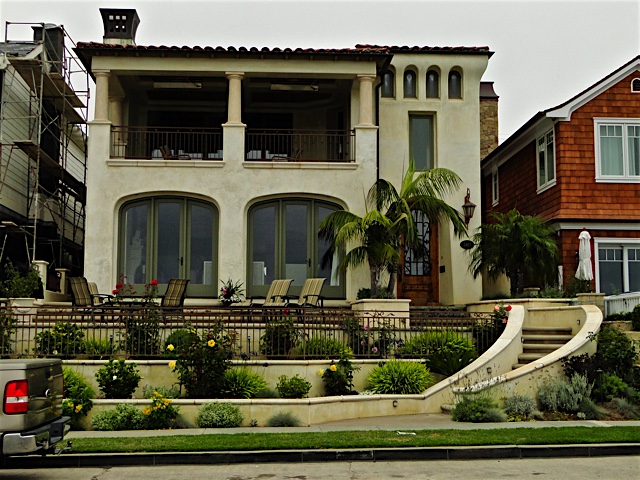 Some sit higher and feature huge windows where the ocean is the constant view. 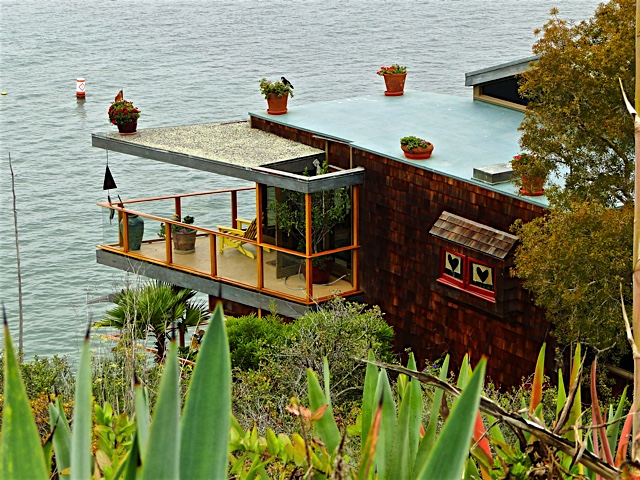 This house has a great balcony that appears to hang out over the water. 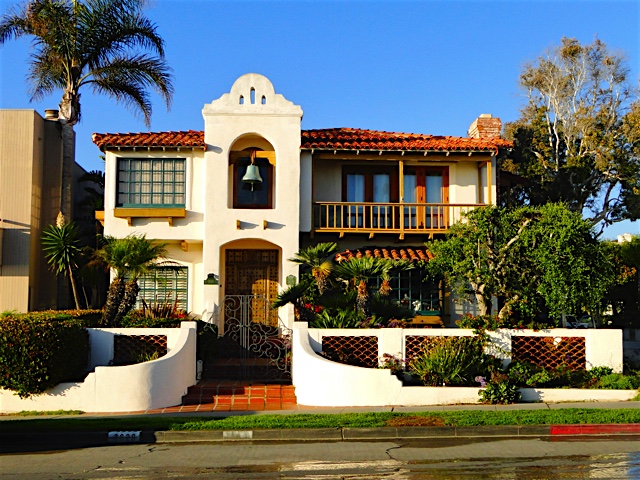 This one has a great Spanish Mission look to enhance it. 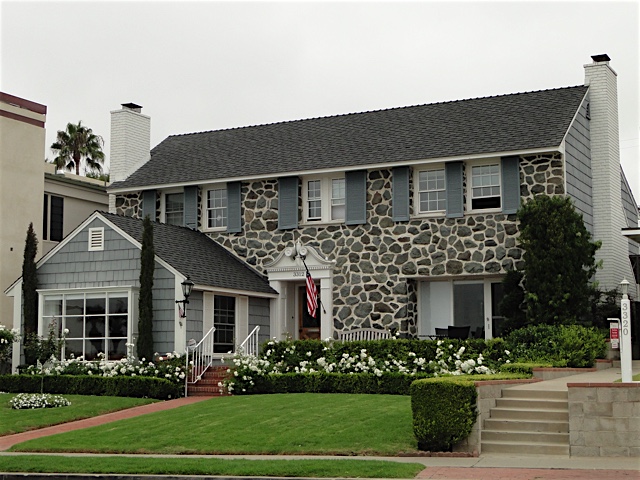 While this one has a more traditional New England look. 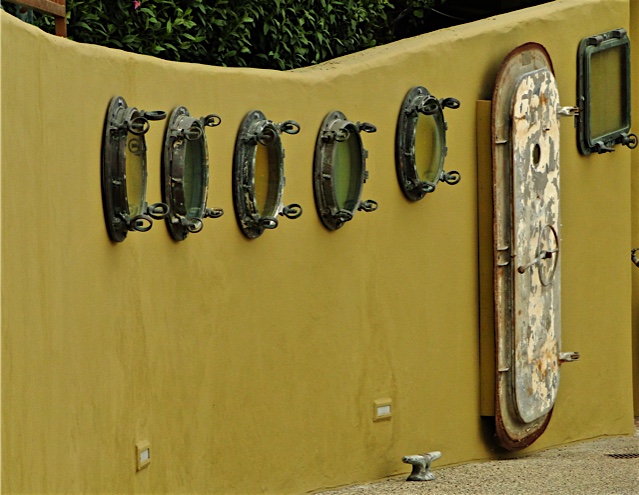 I think my favorite is the house that has the submarine driveway.  Now that is some creative designing.
Posted by Sharon at 1:00 AM 7 comments: