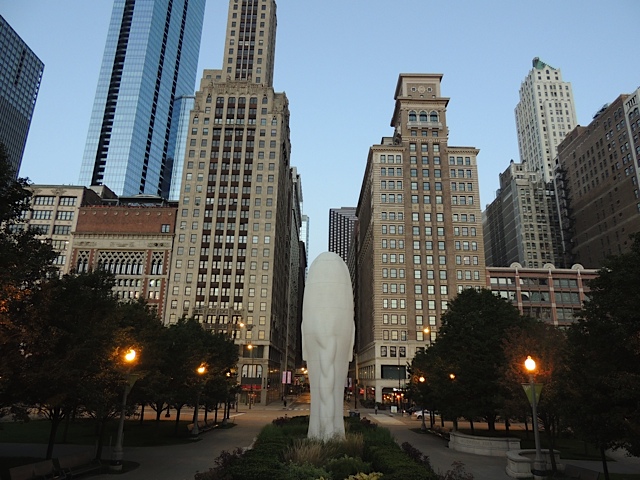 Earlier this month I posted a photo of the Crown Fountain in Chicago's Millennium Park.  That fountain with it's 1000 faces of Chicago citizens projected on glass bricks is by artist Jaume Plensa.  On my trip to Chicago in late September, I found another sculpture by the same artist.  I found out later that there were actually 4 sculptures scattered throughout the park which is why Plensa named the installation "1004 Portraits".  He added four more faces to the 1000 he features at Crown Fountain every day. 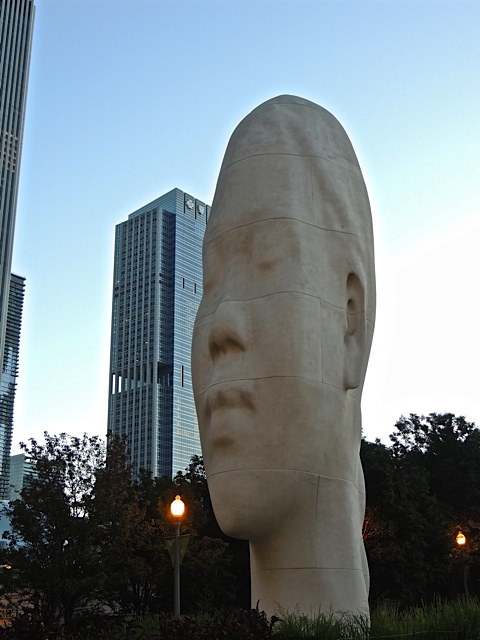 The installation celebrates the 10th anniversary of Plensa's  Crown Fountain.  The sculptures are portraits of young girls created in cast iron and resin.
Posted by Sharon at 1:00 AM 5 comments: 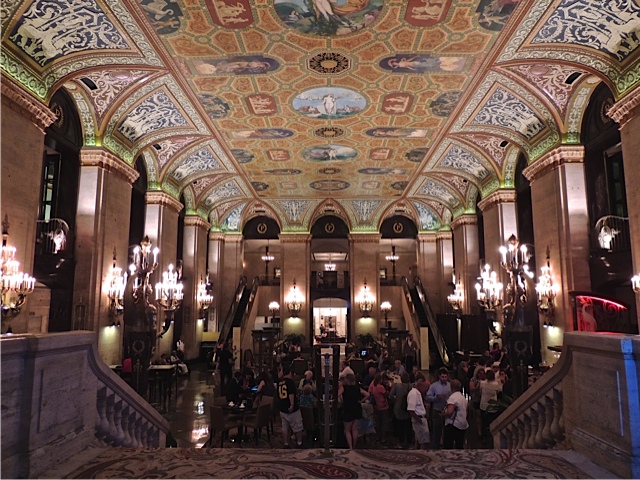 Who would have guessed that the longest operating hotel in the United States could be found in Chicago Illinois?  I knew that the Palmer House held historical significance for the city but, I didn't know that it started as a love story.  Potter Palmer was a wealthy business magnate when he was introduced to Bertha Honore by his former business partner Marshal Field.  Bertha was a wealthy Socialite some 23 years younger than Potter but, her strong personality and desire to succeed swept Palmer right off his feet.  When they became engaged, Palmer had a hotel built as a wedding present to Bertha for her to decorate and manage on her own. 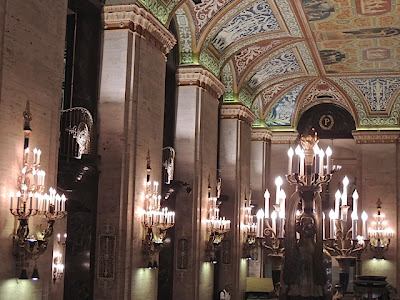 The hotel opened for business in September of 1871 but, as fate would have it, just 13 days later it burned to the ground in the great Chicago fire.

Palmer was determined to rebuild and was able to secure a $1.7 million dollar loan on his signature alone and the hotel was rebuilt using mostly iron and brick.  When it opened again in 1873, it was advertised as the world's only fire-proof hotel. 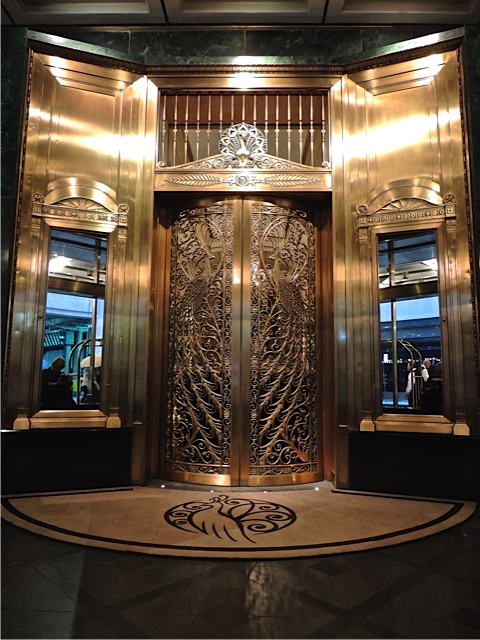 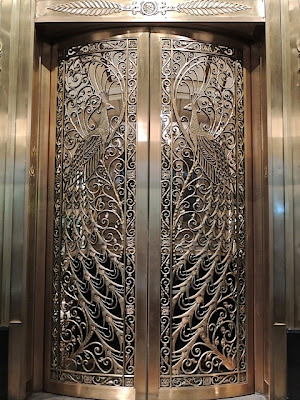 From 2007 to 2009, the hotel underwent a complete renovation at a cost of 170 million dollars.  The historic aspects of the hotel have been painstakingly restored so that it still has that old world elegance and charm while providing all the modern amenities to its guests.  You can see in the top photo how the ceiling fresco is illuminated by the crystal chandeliers and in the last two photos you can see how the peacock elevator doors shine like new.

One interesting note is that the Brownie was invented at the hotel when Bertha asked that a special dessert be created for ladies attending the 1893 worlds fair.

I highly recommend that you take a look at The Palmer House Hilton the next time you are in Chicago.  If you don't stay there, just pop in for a drink or maybe a brownie.
Posted by Sharon at 1:00 AM 8 comments: 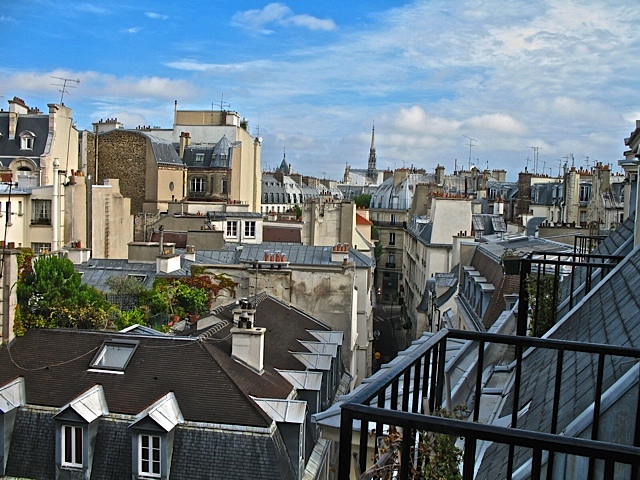 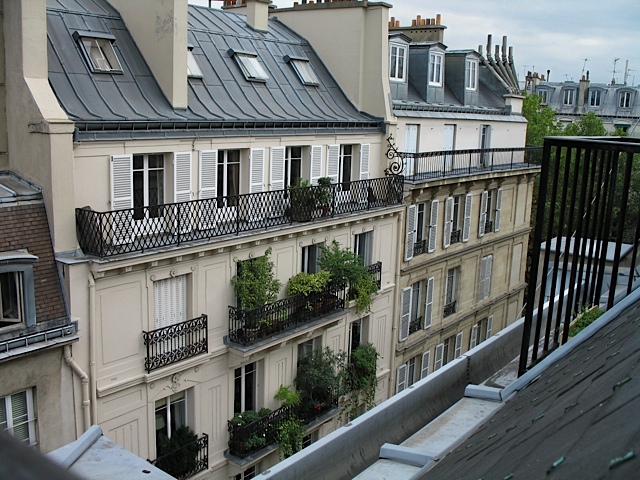 The rooftops are mostly made up of zinc and slate and are dotted with thick chimney pipes that make their endless lines and angles almost abstract in nature. 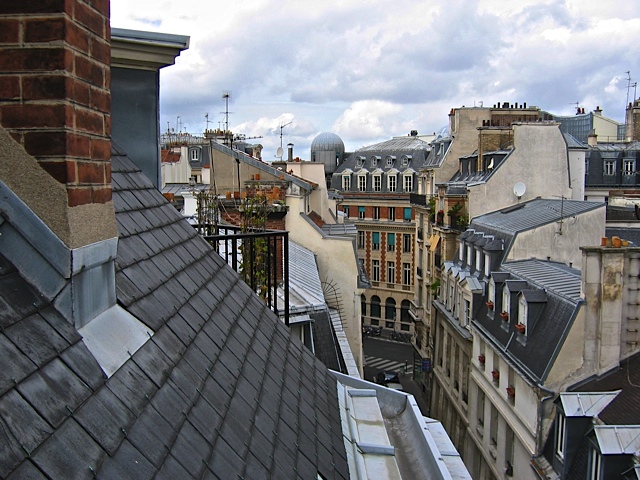 In fact, photographer Michael Wolf was inspired by the city's iconic architecture to create many photos of the rooftops in a series of abstract forms.  You can view some of his shots here. 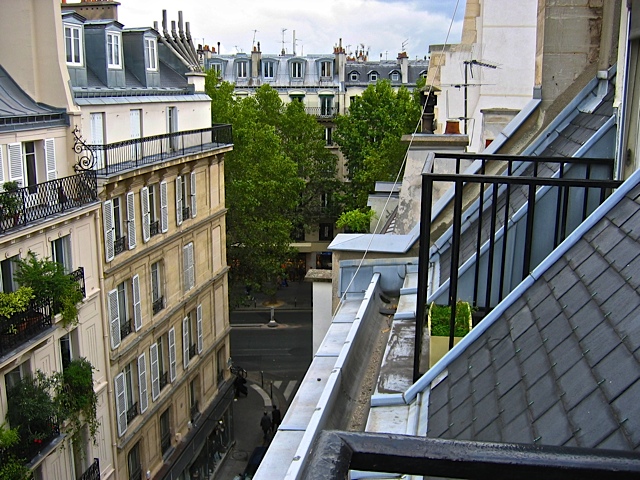 On my last trip to Paris with five other friends, we rented a flat on the upper floor of a building in the beautiful San Germaine area of Paris.  It was a perfect location, close to Notre Dame, The Louvre, and the expansive Luxembourg Gardens.  The apartment had two tiny balconies just big enough for two people at a time, but in spite of that tiny space, we took turns stepping out there to view the rooftops at least once a day.
Posted by Sharon at 1:00 AM 7 comments: 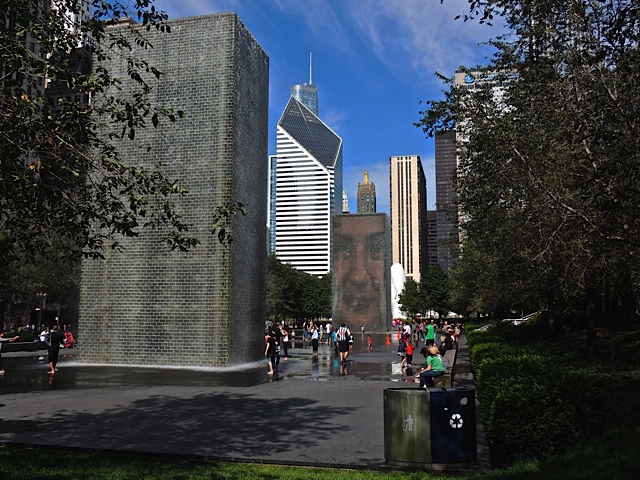 Crown Fountain is another large scale art work found in Millennium Park in Chicago.  It consists of two 50-foot glass block towers at each end of a shallow reflecting pool.  Each of the towers project video images of the faces of a variety of Chicago citizens on the inside wall of the towers.  (You can see one of the images in the photo above.)

The fountain was designed by Spanish artist Jaume Plensa and is a modern take on the traditional gargoyles found in fountains where faces of mythological beings were sculpted with open mouths to allow water, a symbol of life, to flow out.  Plensa designed this fountain to project the faces on LED screens and having water flow through an outlet in the screen to give the illusion of water spouting from their mouths.

I'm not sure the children who love to play in the water ever even notice the faces above them.  They are just having fun splashing and running through the water.
Posted by Sharon at 7:46 AM 3 comments: 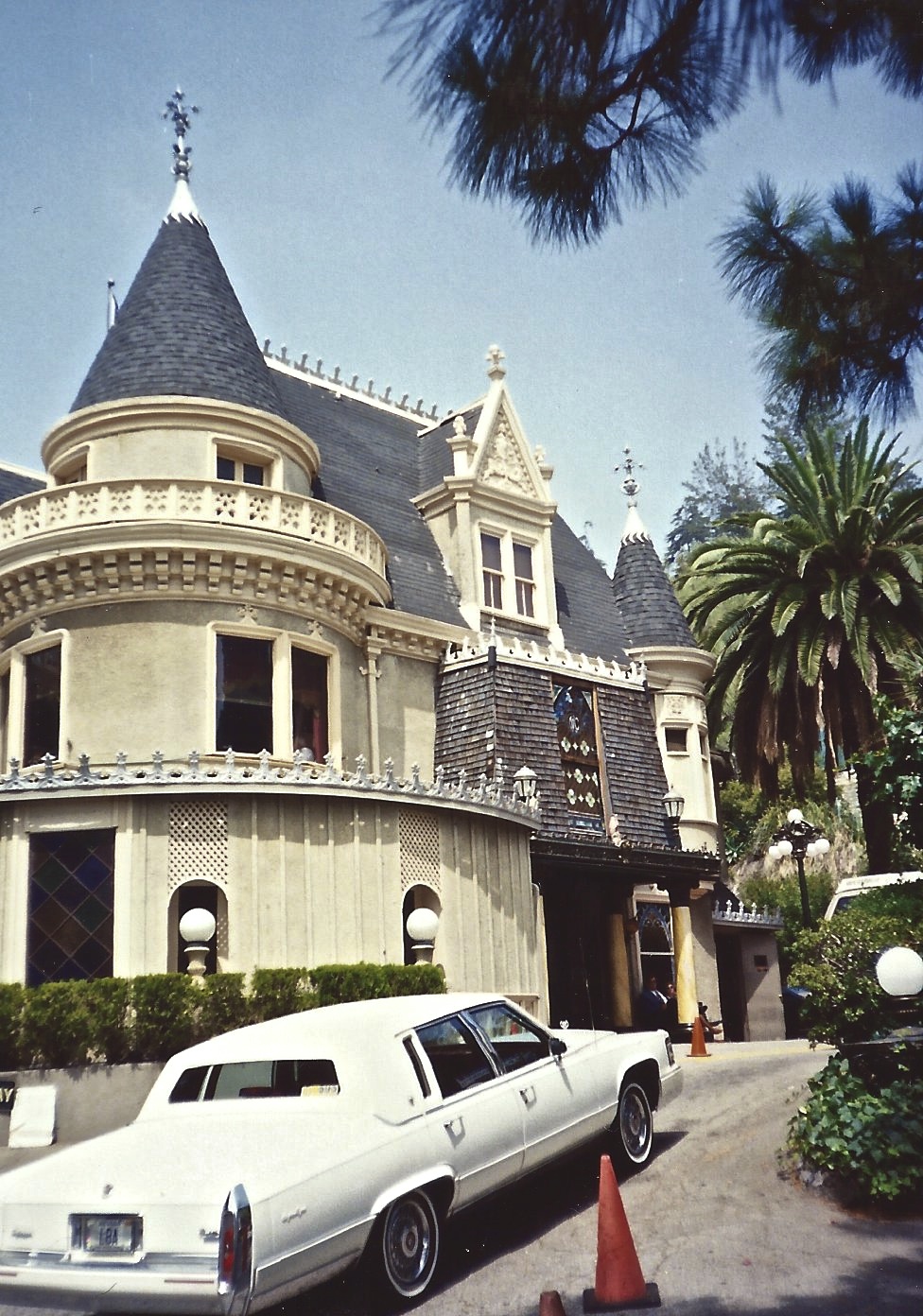 This is another old photo that I've scanned from my archives.  The Magic Castle in Hollywood is the private clubhouse for the Academy of Magical Arts.  Luckily, my niece, Kim who now lives in Missouri is a magician and several years back she took me and her parents to The Magic Castle for dinner and a show.  The castle itself sits atop a hill in a grand building that was once a home to a banker, Rollin B. Lane who happened to own most of the land that is now Hollywood.  The home was built in 1909 and the Lane family moved away in 1940.  The home got divided up into apartments and and by 1960, it's fate was uncertain.  That is when Milt Larsen purchased the place to turn it into the private club it is today.  The doors were opened on January 2nd, 1963 and it's been operating ever since.  I enjoyed getting to experience this place that so few get to see.
Posted by Sharon at 1:00 AM 4 comments: