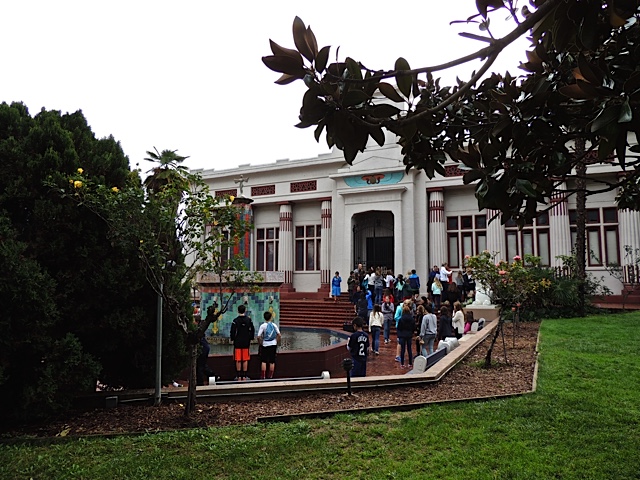 Some of you may remember that I flew to San Jose California last December to visit a museum that I had visited many years ago.  It was the Rosicrucian Egyptian Museum and since I love all things Egyptian, I wanted to go again and renew my memories of the place (and, yes take photos too).  Whenever one visits a museum on a weekday you are bound to run into school groups out on field trips.  (It happens to me quite often at the Desert Botanical Garden and sometimes at the Phoenix Art Museum.) So it was no surprise that I had to share the museum and the grounds with school children, lots of school children.  For the most part, they were well behaved and followed instruction very well.  Since they were everywhere around the grounds, including them in some of the photos was inevitable. 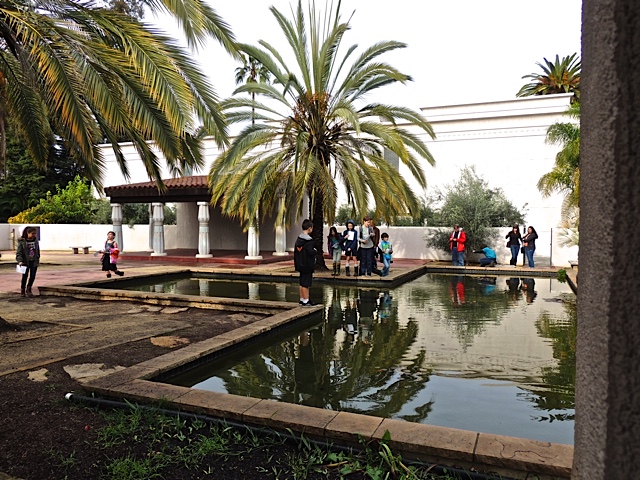 From the moment they entered the museum grounds, they were drawn to the reflecting pool just inside the gate.  Children and water, it's a natural combination. 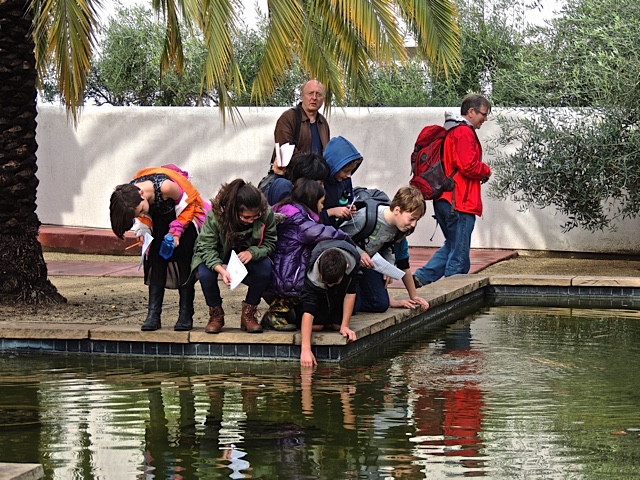 The children were so engrossed in the water, that they didn’t see me snapping pictures in the distance.  However, I think that one of the adults caught sight of my prying lens.  He has a bit of a worried look on his face but, he soon forgot that I was there. 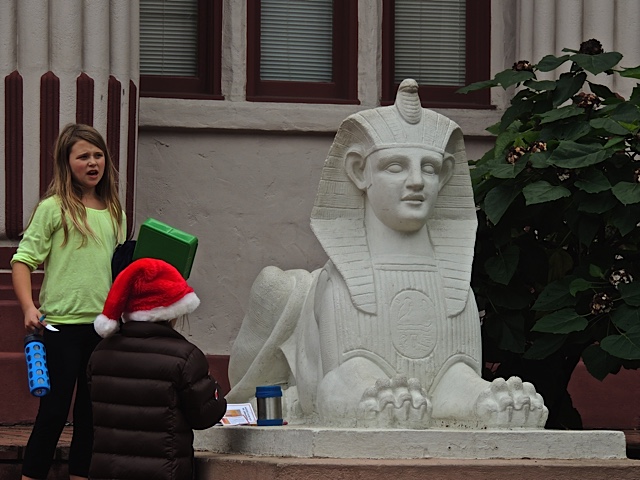 The children ate their lunch in the courtyard where lunch boxes and thermoses were balanced on stairs and on statues.

While inside the museum, they asked a lot of questions and seemed to have an enthusiastic interest in the ancient history of Egypt.  Maybe there were some future Egyptologists in the group.
Posted by Sharon at 1:00 AM 6 comments: 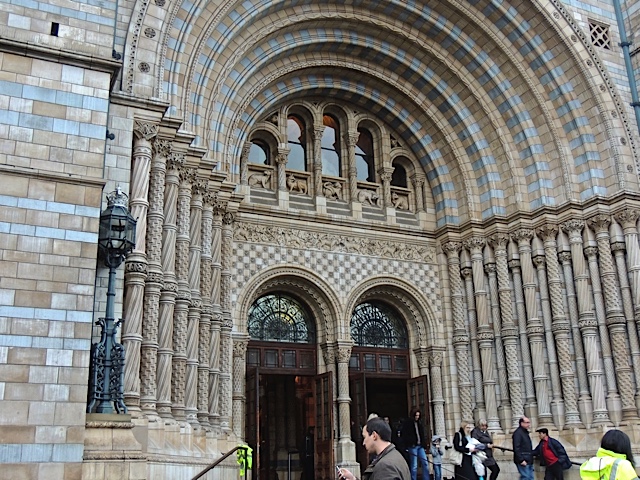 Last week I had a post about a sparkly display that I saw at the Natural History Museum in London.  This week I thought I'd feature the museum itself.  The building was built in the Romanesque style and opened in 1881.  The exterior is composed of terra cotta tiles which were used primarily to resist the very sooty atmosphere of Victorian London.  Many of the tiles contain reliefs of flora and fauna. 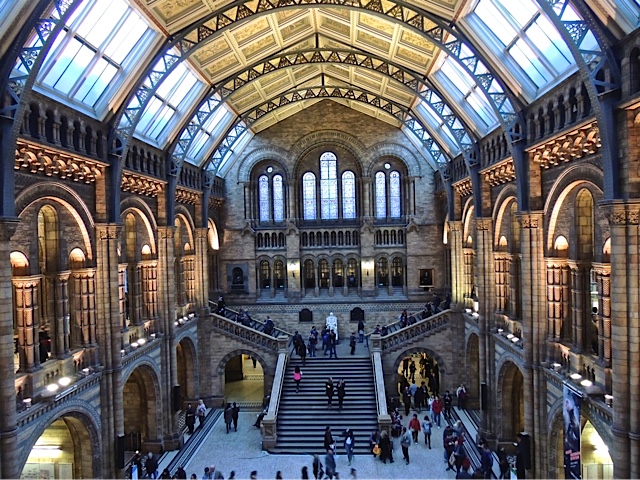 The inside is quite spectacular with a central space crowned by a glass ceiling to let in the natural light. 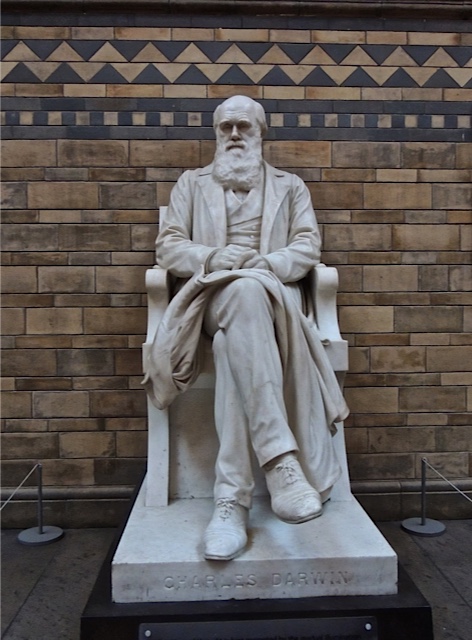 Sitting in a place of honor on the landing of one of the grand staircases, is this statue of Charles Darwin sculpted by Sir Joseph Boehm.  (You can see him in the second photo down there on the landing.) He looks out over the main hall at the thousands of people who enter the building every day to view the the wonderful exhibits that depict the history of our world.
Posted by Sharon at 1:00 AM 6 comments:

The Aurora Pyramid of Hope 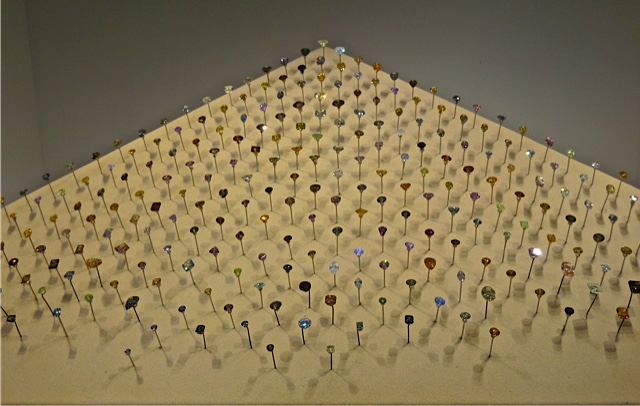 There are so many interesting things to see inside the Natural History Museum in London but, I have to admit I went back twice to look at these beauties.  Called The Aurora Pyramid of Hope, this is a collection of 296 natural diamonds in a wide variety of colors.  It is said to be the most comprehensive natural color diamond collection in the world.  After a little research, I learned that the collection is actually owned by Aurora Gems Inc. and has been on loan to various museums around the world.  I'm glad I got to see them when I was there.  The display was in a large case and every few minutes the light would dim and a UV light would come on and all gems would glow.  Wikipedia has a picture of the gems glowing on their site here if you would like to see it.
Posted by Sharon at 1:00 AM 7 comments: 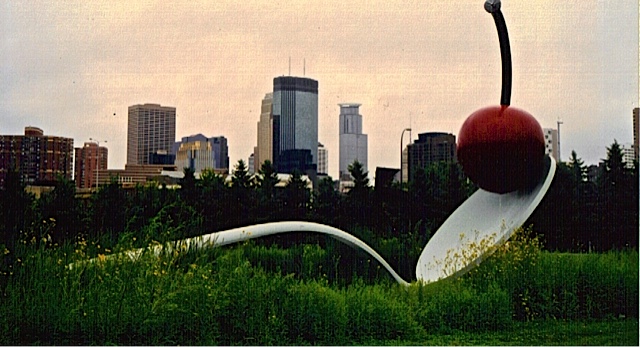 One of my all-time favorite sculptures is located in Minneapolis at the Walker Art Center’s Minneapolis Sculpture Garden.  I fell in love with it the first time I saw it.  It was created by Claes Oldenburg in collaboration with his wife Coosje van Bruggen.  During the summer months, a fine mist sprays from the cherry’s stem and in the snowy winter months it takes on the look of being topped with whipped cream in a bowl of ice cream.

I apologize for the graininess of this old scanned photo.
Posted by Sharon at 1:00 AM 8 comments: