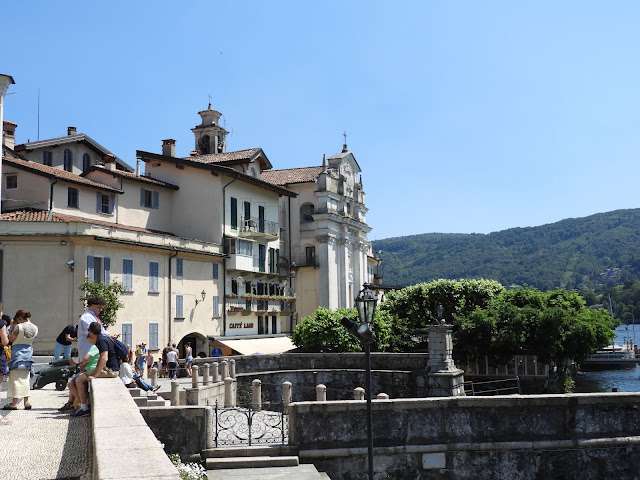 While vacationing on Lake Como last May, we took a day trip over to Lake Maggiore to visit the three islands on the lake.  We made our way to the city of Stresa where there were plenty of boats that transport tourists to the three islands.  In this post I'll show you parts of the amazing villa on Isola Bella. 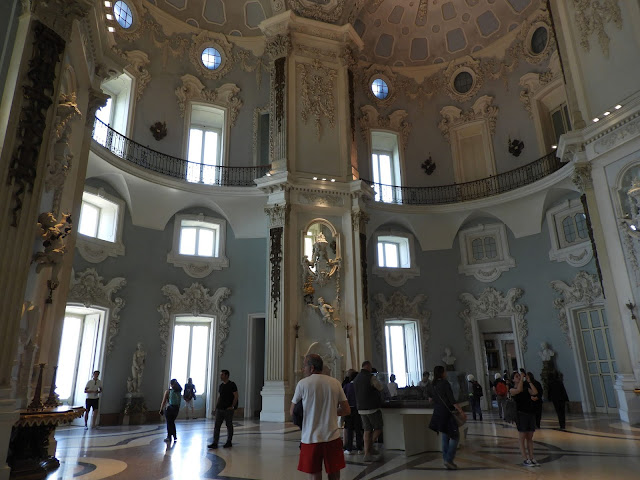 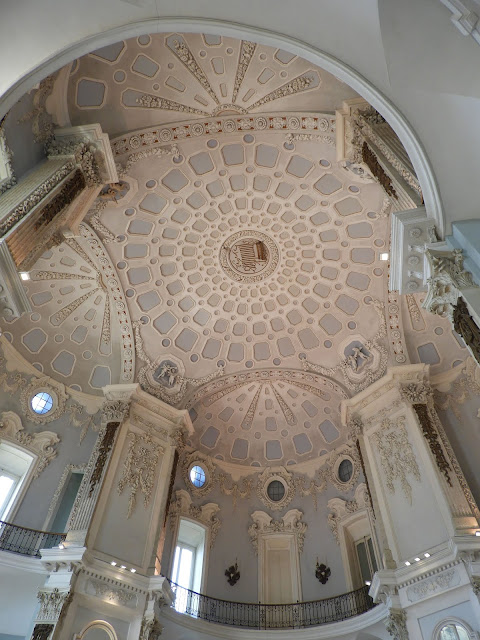 The villa was built by Carlo III of the Borromeo family in honor of his wife Isabella D'Adda.  The island's name Isola Bella was also to honor his wife.

He must have loved his wife very much because this was the most amazing villa.  It was huge and frankly a bit over the top in many ways.

In this post, I'll feature some of the rooms but, I'll have to post several other photos in different posts to cover some special features and the unbelievable garden.

The first photo was taken outside the villa and the next two are of the reception room.  This room made me think of the rotunda of the United States Capitol in Washington DC.  It was that big with it's own rotunda and dome. 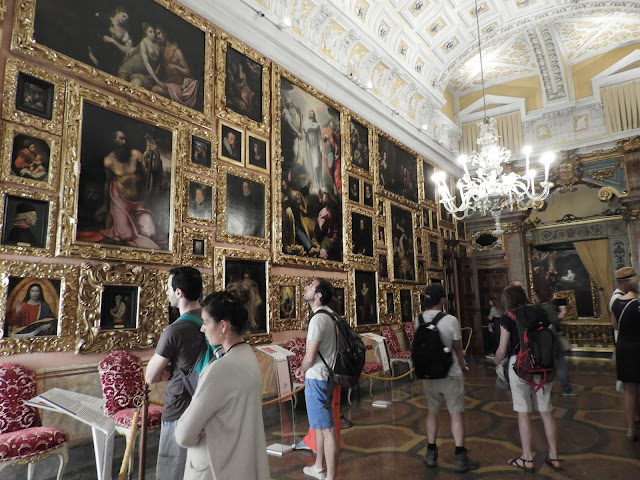 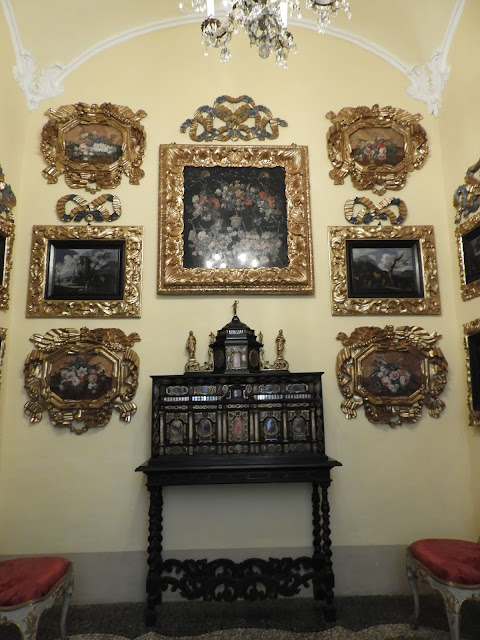 There were paintings by Carracci, Cerano and Tiepolo that literally covered the walls of one room. 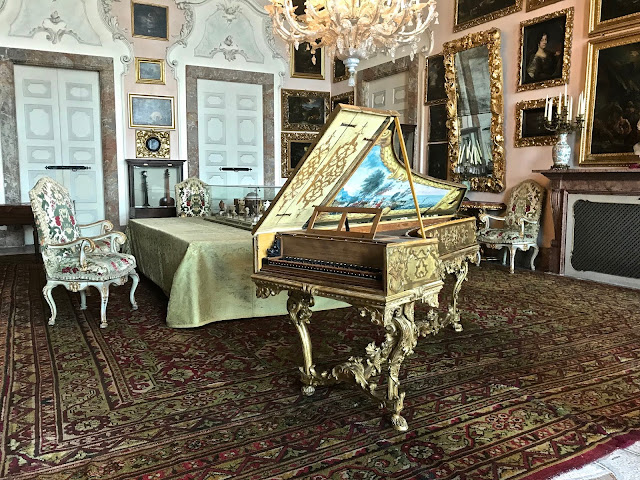 There was a music room that featured a beautiful inlaid piano-forte. 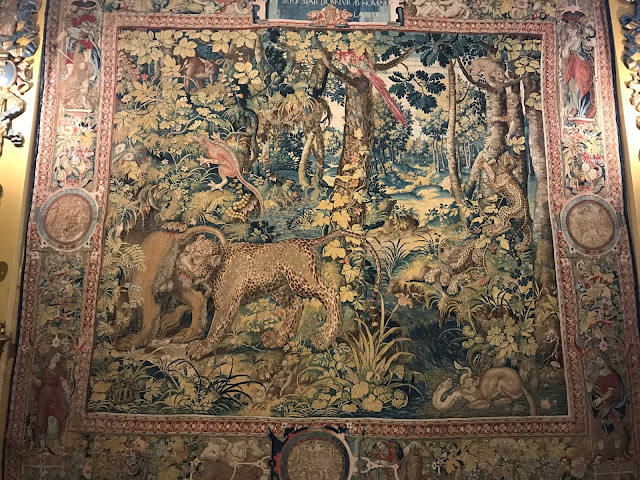 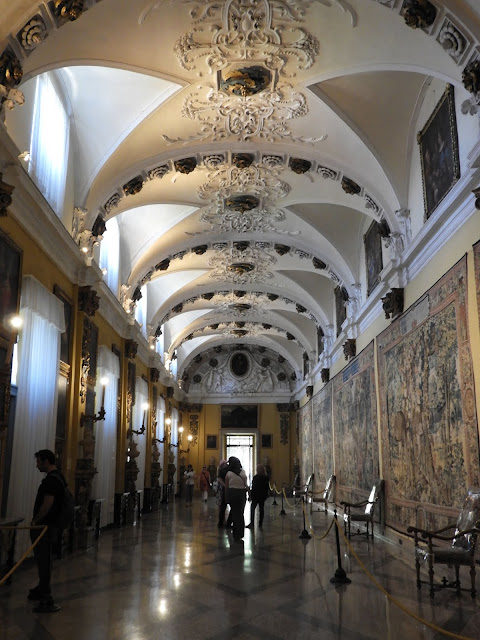 There was a tapestry hall with the walls covered in fine tapestries with an assortment of mythical scenes on them. 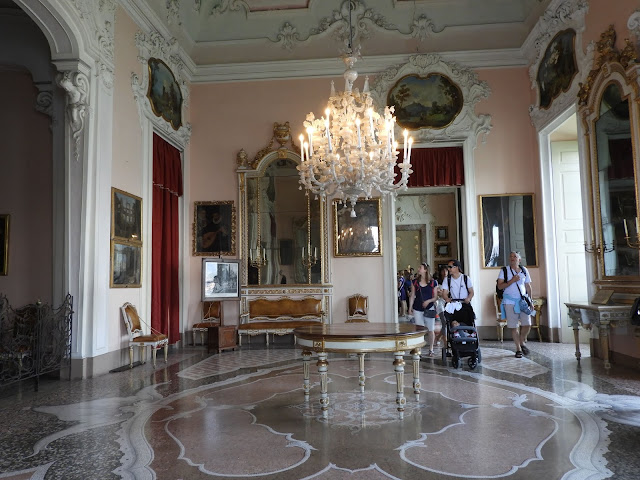 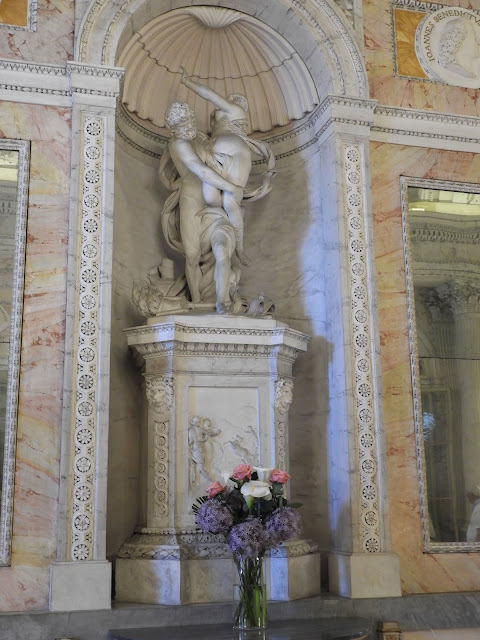 The bedrooms were bigger than my entire house with marble floors and marble tables.  And, of course huge chandeliers.

Every room and every corner was decorated with statues, paintings and amazingly carved marble walls.

Keep in mind that I've only shown you a few of the rooms.  This villa was absolutely huge.

Next week I'll show the throne room which I think had to be the most over-the-top room of all.  You'll want to see it.
Posted by Sharon at 1:00 AM 3 comments:

The Call of the Sea 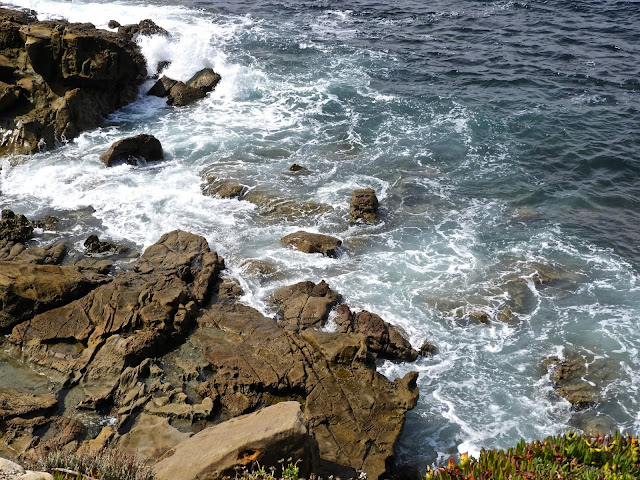 Obviously, I'm wishing I was still by the sea with that cool and refreshing sea air blowing in my face. That has to be why I was drawn to posting some photos from southern California today.  I took long walks either on the beach or on the higher paths above the beach where I could look down on the waves meeting the rocks. 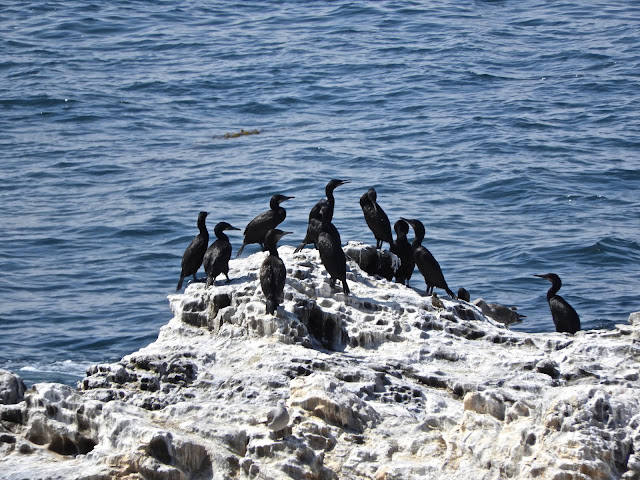 Or, I could telephoto over to a rocky outcropping where the jet black cormorants have taken up residence.  You can tell from the color of those rocks that they have pretty much made this their home for a very long time. 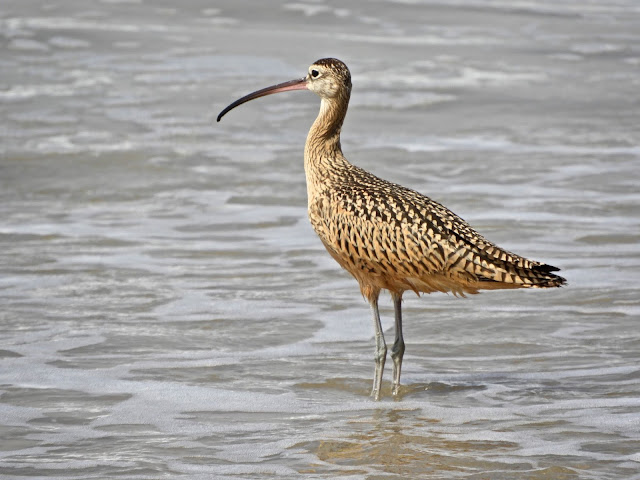 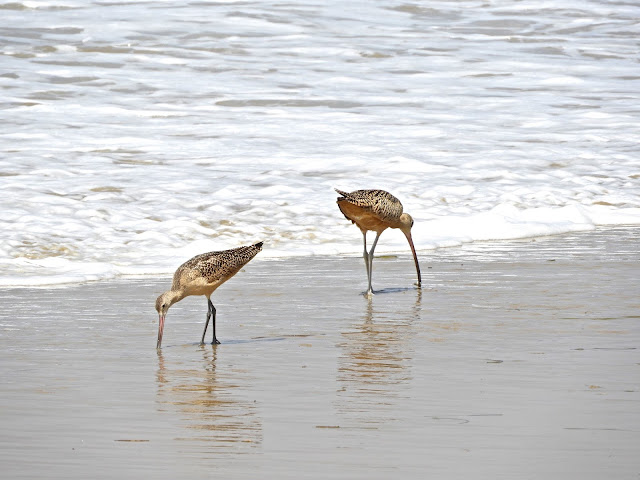 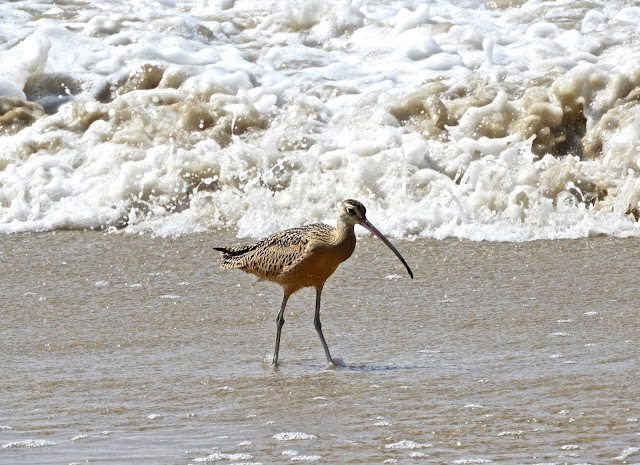 From the beach, I had fun watching the sand pipers running in and out of the water and carefully picking tiny bits up from the sand. 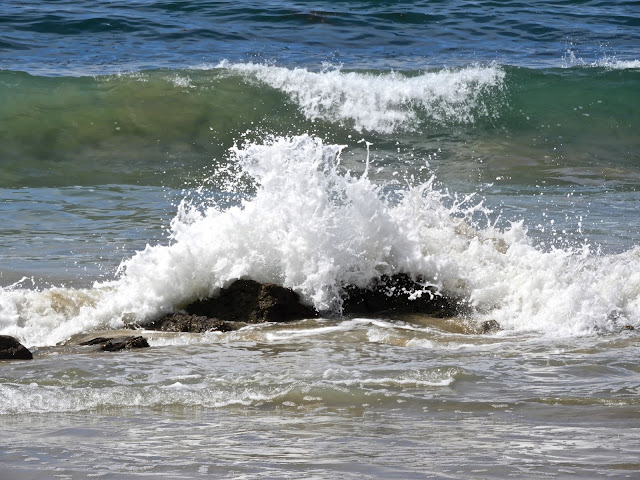 When I wasn't chasing the birds, I was watching as the waves crashed against the various rocky places making huge, foamy splashes. 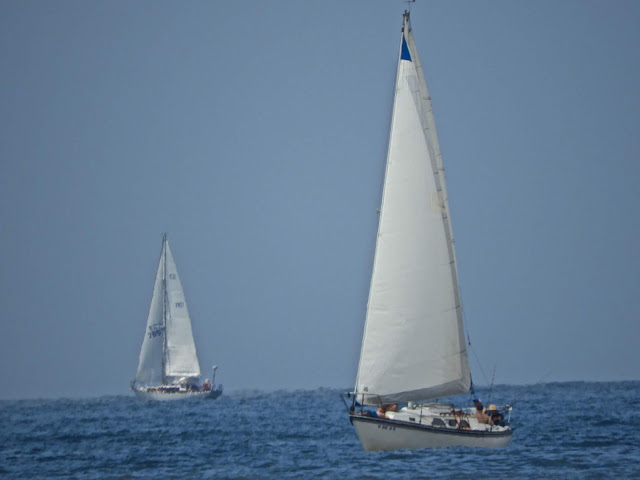 When I saw sailboats on the horizon, I would try to get a good telephoto shot.  They always tend to be a bit fuzzy from taking them hand-held, but I take them anyway. 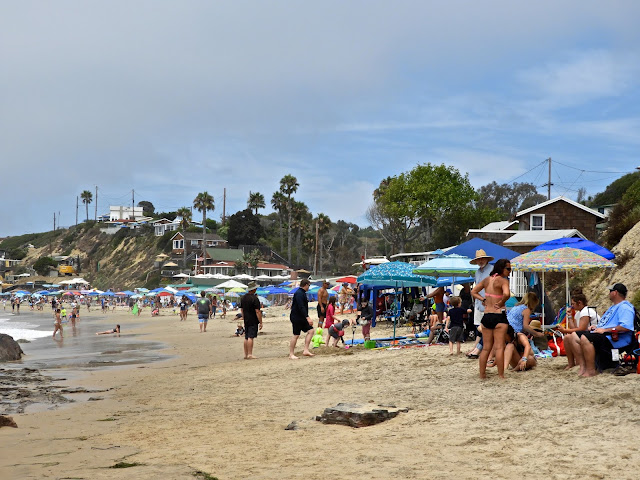 I also tend to get far away from the maddening crowds, especially on Saturday or Sunday when the beach seems to explode with humanity all crowded together in one spot. 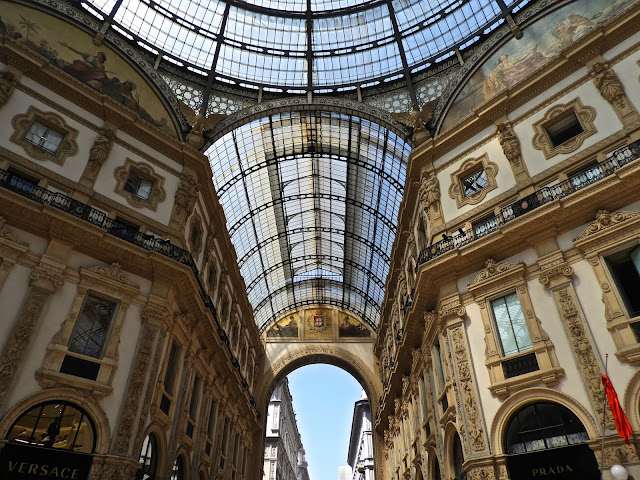 The third stop on the 4 hour "Highlights of Milan" tour was at the Galleria Vittorio Emanuele II.  It has to be the world's most beautiful shopping mall.  The galleria is an elegant arcade lined with cafes and high-end, designer shops. 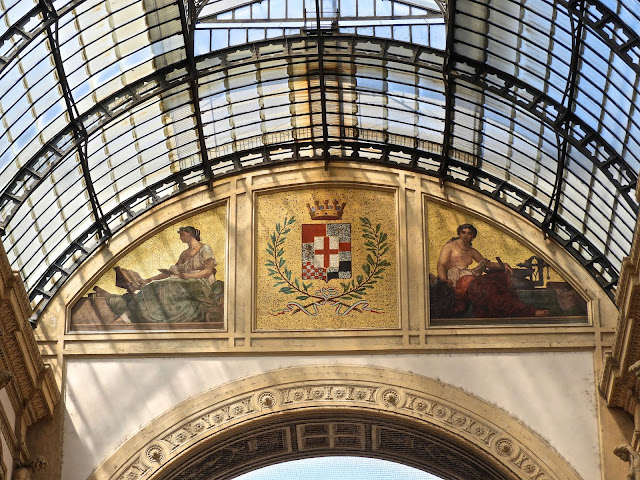 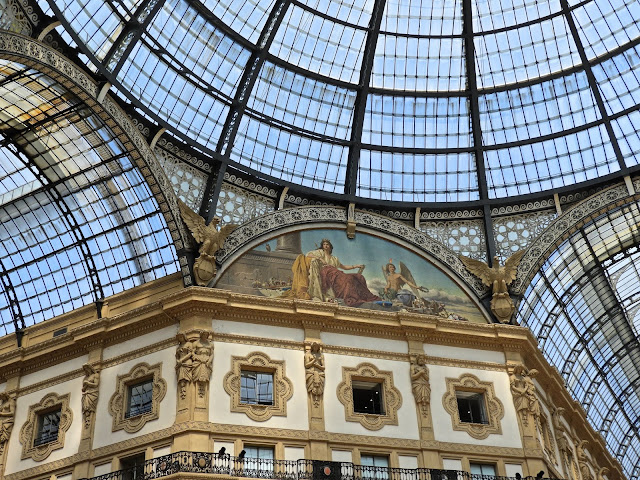 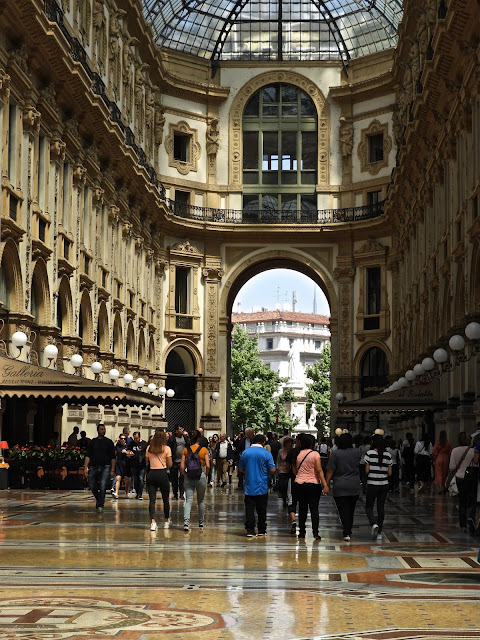 People stroll and dine under the huge glass dome and the four branches that radiate from the center.

Our tour guide walked us through the area explaining a bit about its history along the way.

However, that wasn't the only time we visited this grand place. We kept coming back several times to soak up the elegant atmosphere. 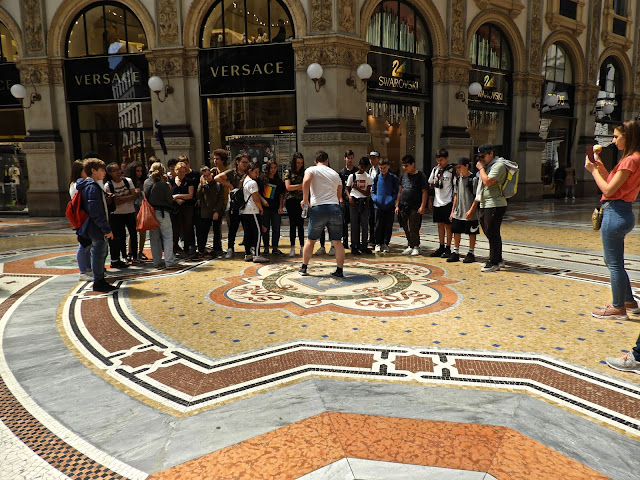 Our tour guide did explain one interesting and amusing bit of history.  The floor of the mall contains four mosaics that represent the coat of arms of the four capitals of the historic kingdom of Italy, Rome, Florence, Turin and Milan.  It happens that the symbol of Turin is a bull and a generously endowed bull is depicted on the coat of arms.  Soon after the floor's installation, people began to think that the bull's rather large genitals would bring good luck and men began to spin around, counter-clockwise, three times with their heel on said genitals.  Well, as you can imagine, the mosaic tiles soon wore out and consequently, the bull has been savagely neutered, so to speak.  However as you can see from this photo, the superstition still persists.  People still spin on the vacant spot on the bull's anatomy.  Our guide suggested that if we tried it, we might wish for the bull to be restored to his original robust masculinity. 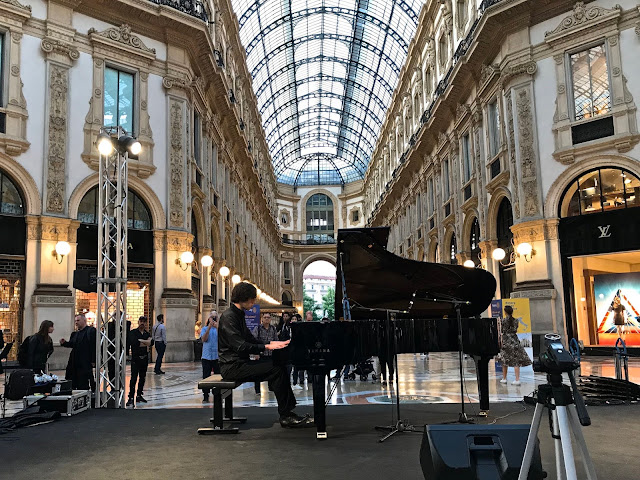 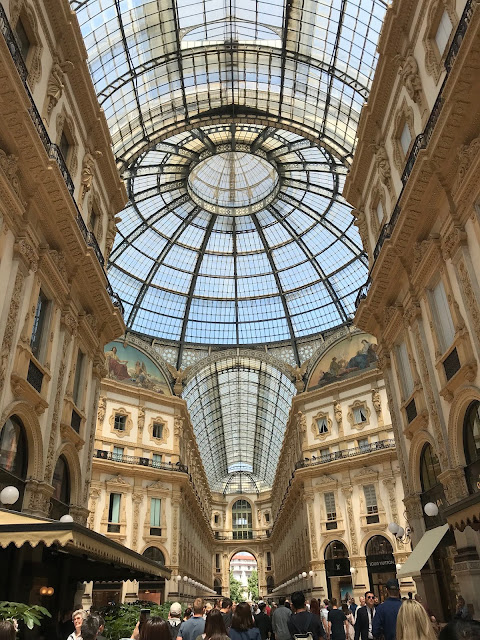 On our last evening in Milan, when we strolled through the galleria once again, a young pianist was performing under that magnificent glass dome.   It was a wonderful way to celebrate our last visit to this gorgeous place.
Posted by Sharon at 1:00 AM 8 comments:

The "Apple" is Everywhere 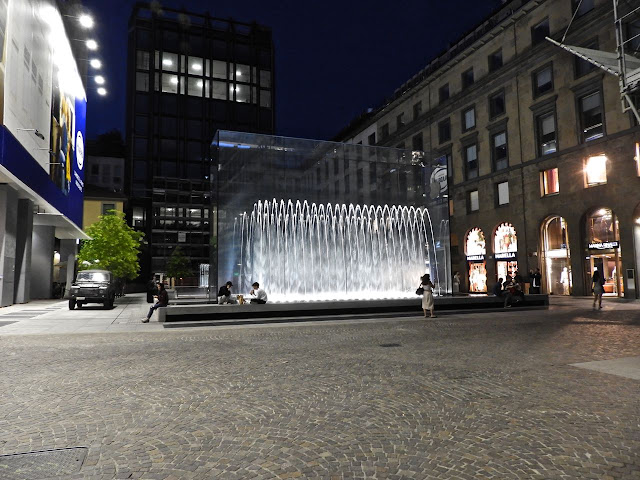 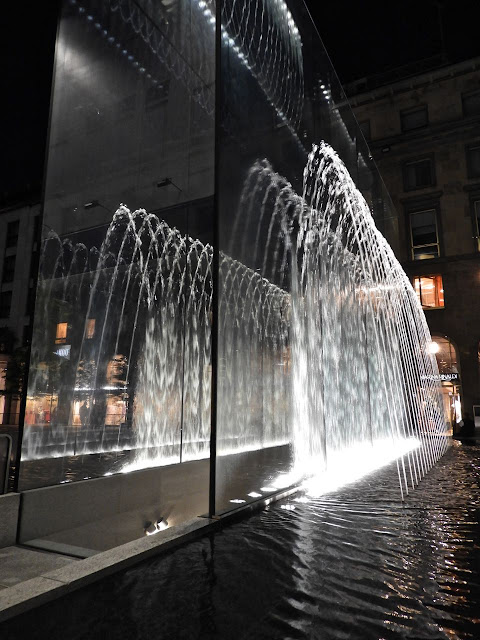 One evening while strolling around the beautiful streets of Milan, I peeked down one street and saw this gorgeous fountain.  I walked closer to get a photo and noticed that the fountain was cascading water right next to a glass wall. 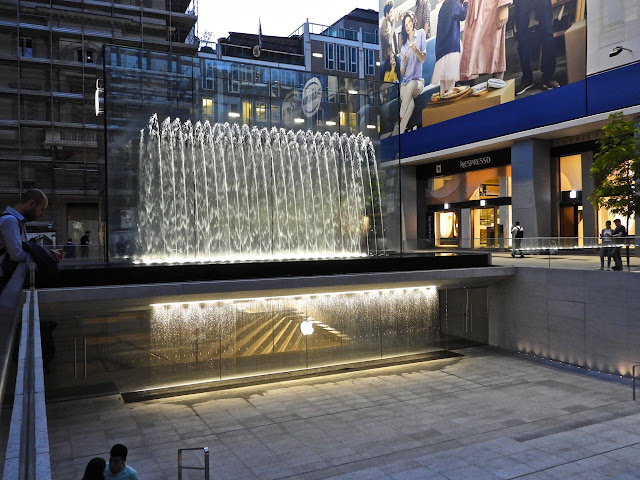 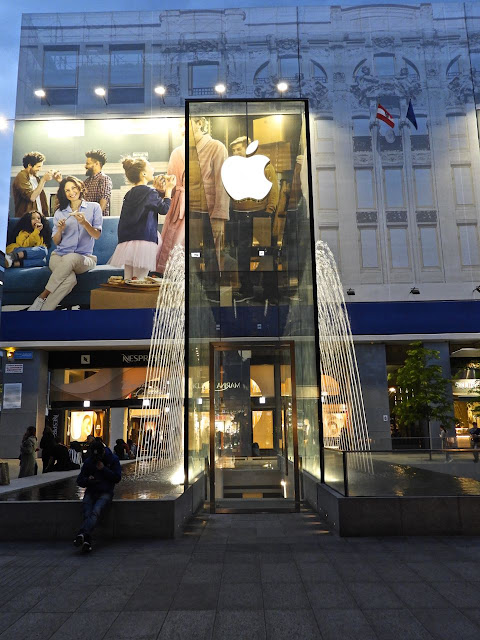 The following night, I ended up having dinner at a restaurant in the same plaza where that fountain was located only on the other side.  So imagine my surprise when I discovered that the fountain was part of the Apple Store.  In fact, it was one of the entrances to the store. 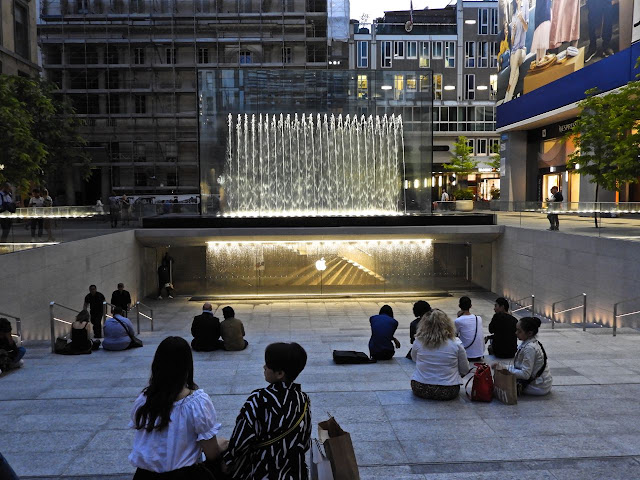 That has to be one of the most elaborate and expensively designed Apple stores I've ever seen.  And, I thought the new one they built in Scottsdale was impressive.  Clearly the Apple Corporation has money to spare.
Posted by Sharon at 1:00 AM 2 comments: