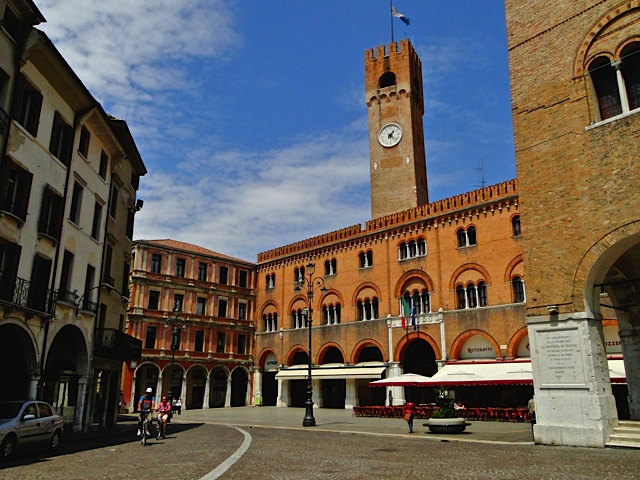 Above is a picture of the city square in Treviso.  I'm not sure how I caught it so quiet and calm for this photo.  Over to the right, you can make out an awning over some tables and to the far right some arches. 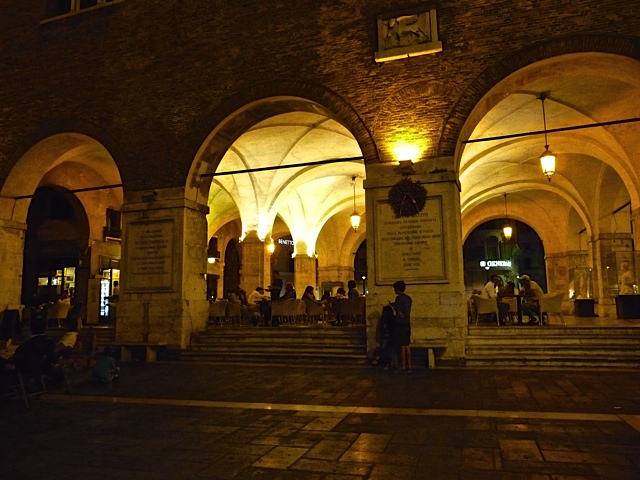 At night, tables appeared under those arches and a restaurant served dinner there. 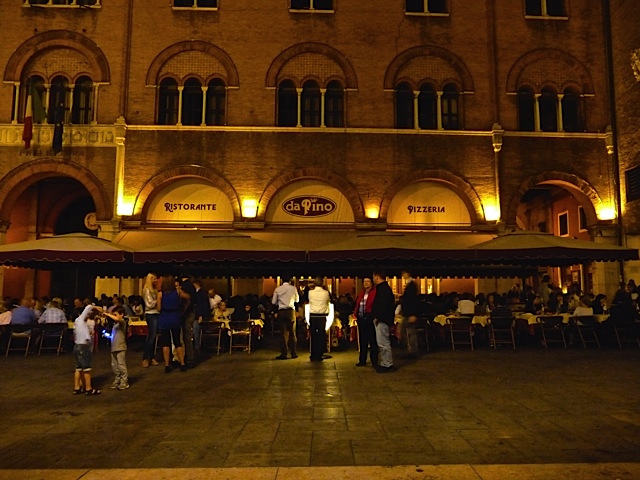 However, we always opted for the one with the awning.  The Pizzeria daPino was so good we went there twice while we were there.  In fact, that's Janet in the red jacket talking to Steve while we waited for a table. 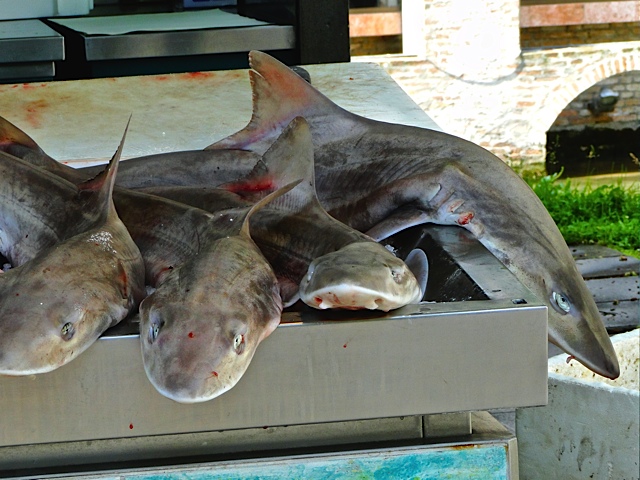 On Saturdays, there was a huge outdoor market that went up.  You could get literally anything there.  Clothing, household goods, flowers, plants and of course, shark if you wanted it.  Shark fin soup anyone? 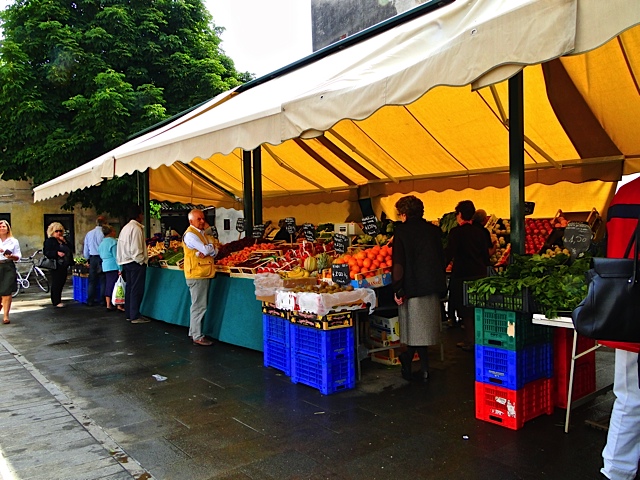 The vegetables and fruit looked fantastic and were enthusiastically being picked up by locals who were thinking of the big weekend meals they were going to have.

There will be some more to learn about Treviso in a future post.
Posted by Sharon at 1:00 AM 4 comments: 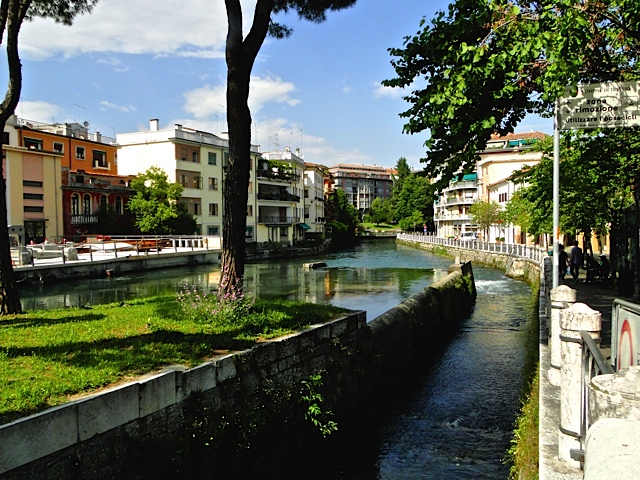 When I went to Italy two years ago, the second week of the trip was spent in Treviso staying with my friend Janet's nephew Steve.   He was working there on a temporary assignment.  Treviso is a city in the Veneto area and is the capital of the Province of Treviso.  It sits in the heart of an industrial area where much of Italy's manufacturing takes place. 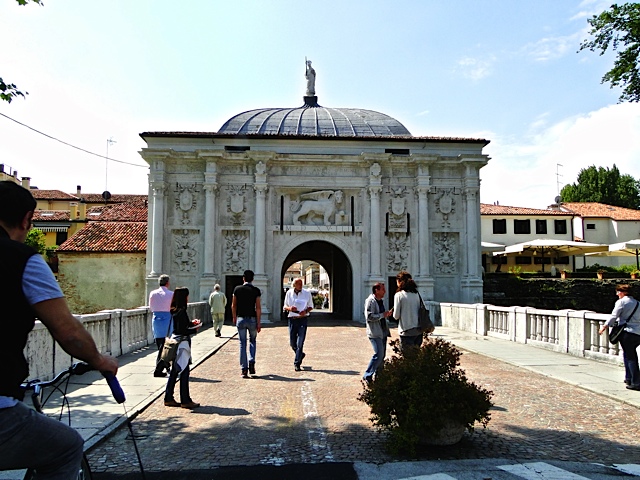 Treviso is a walled city and the photo above shows one of the old gates that led inside.  There are about 3,000 residents who live within the walls but, there are some 80,000 that make up the entire urban center. 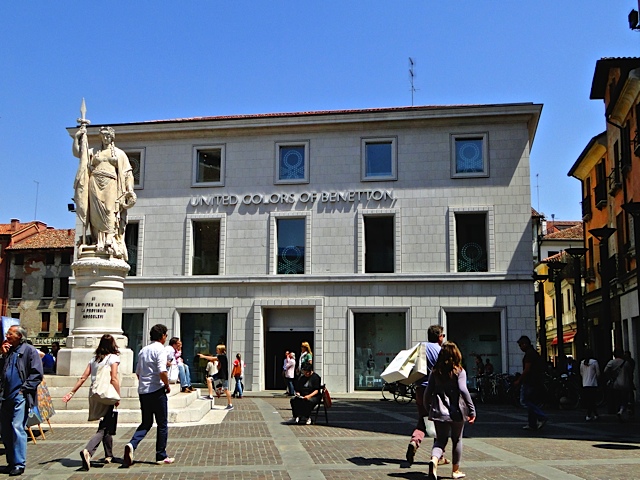 The city is the home of the Limited Colors of Benetton clothing company and it's flagship store is pictured above.  It is also the home of the Pinarello Bicycle company, the elite brand of bicycles used by famous racers around the world. 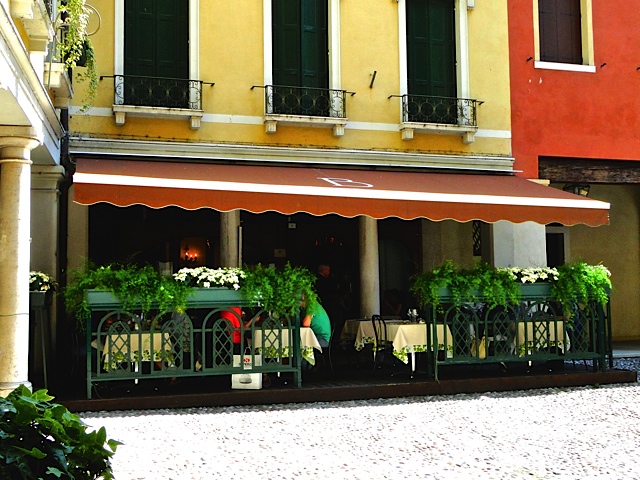 Another of the city's claims to fame is that it's the birthplace of the dessert known as Tiramisu.  In fact, it was invented at the restaurant picture above, Ristorante Beccherie.  We had lunch there one day and I must say it was one of the very best meals I had in Italy.  I ordered the pasta with pesto and that had to be the freshest and most delicious pesto I've ever had.  No, I didn't have the Tiramisu.  I don't care for the taste of coffee so any dessert that has coffee in it is avoided by me.

I'll post some more photos from Treviso next Sunday. 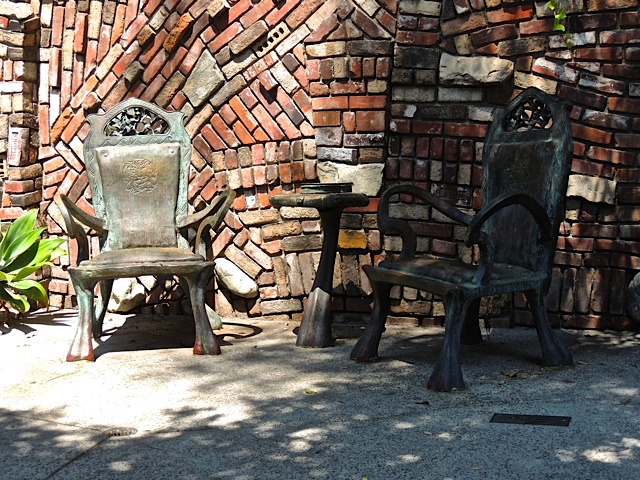 When I visit Laguna Beach in the summer one of my favorite stops is a very tiny little city park that is sort of hidden from the street.  At the entrance you will find these two chairs in sculpture form.  They convey a relaxing atmosphere. 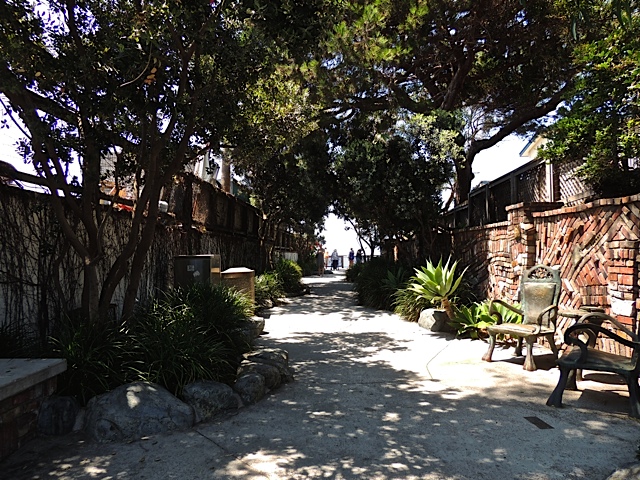 The park is long and narrow but, keep walking.  The end of that walk will be very rewarding.  In this shot you can see that some people have already reached the end for the main event. 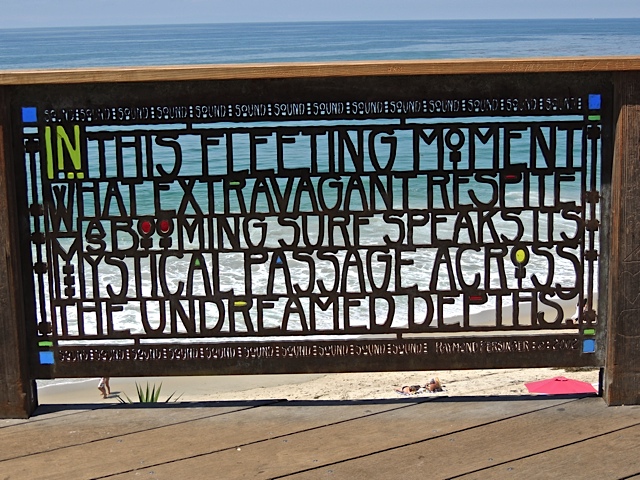 When you get to the end, the view below is breathtaking overlooking the ocean.  The railings around the the look-out spot are framed with poetry. 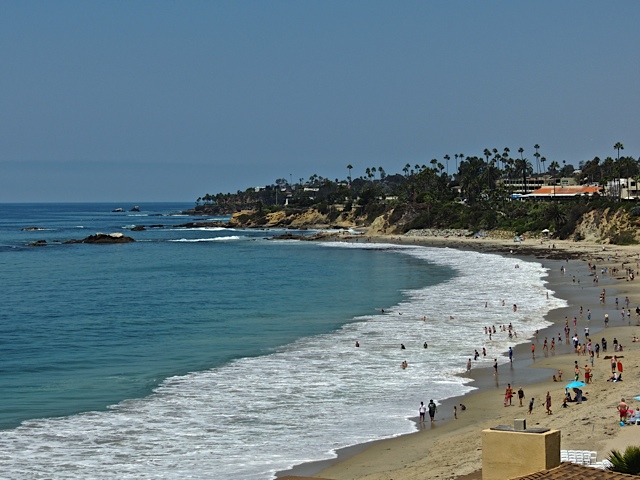 But, I'm guessing that many people don't see the poetry because the view is so appealing.  From here you have a grand view of Laguna Beach's main beach area with all the beach-loving people enjoying the sun and ocean waves.
Posted by Sharon at 1:00 AM 6 comments: 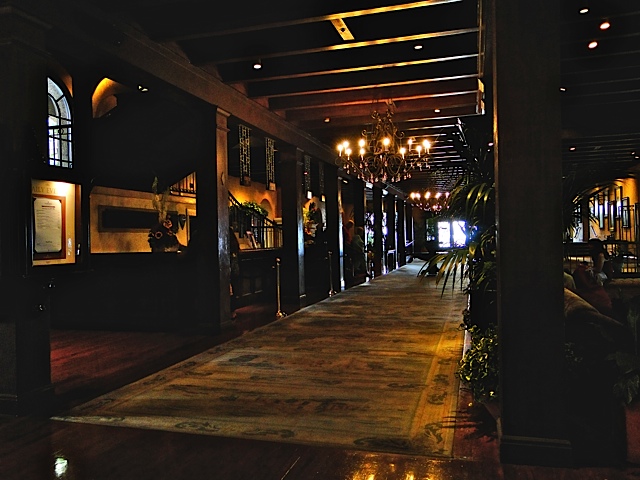 After walking under those Mission bells (pictured in my last post) to the entrance of the Mission Inn hotel in Riverside California, the Spanish style continues into the beautiful wood beamed lobby. 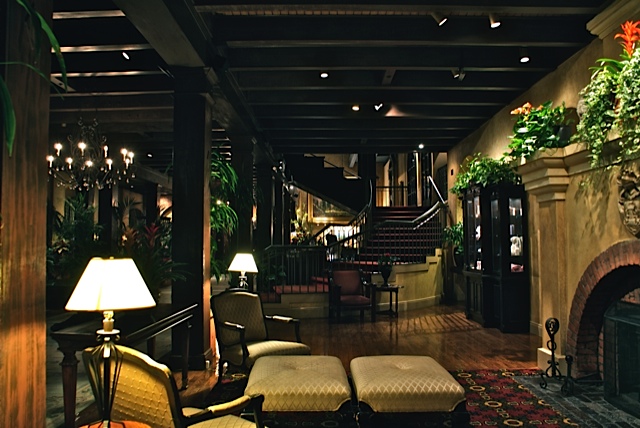 Every corner of the lobby is warm and inviting with special touches that make it feel like home.  The stairway leads to the second floor where my room happened to be.  There was an elevator to use but, I really enjoyed using those beautiful stairs. 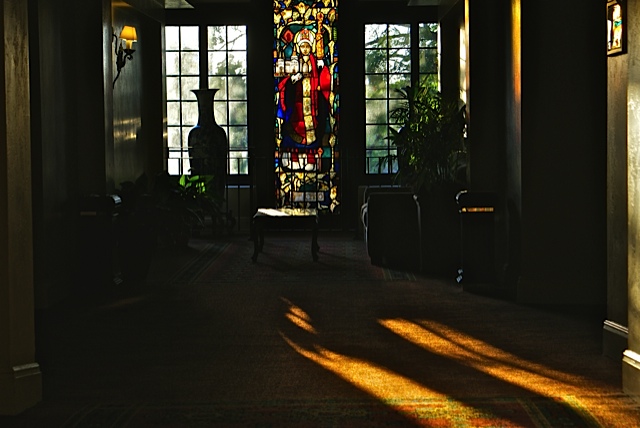 At the end of the hall where my room was located was this beautiful stained glass window.  I took a few photos of the window hoping to capture that late afternoon sunlight streaming through. The lobby bar is called the Presidential Lounge and that photo of Richard Nixon is there because Richard and Pat Nixon were married here. 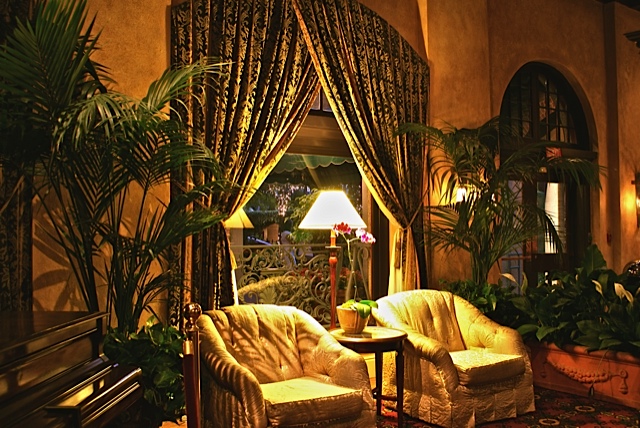 This is another sitting area in the lobby right next to the entrance door. 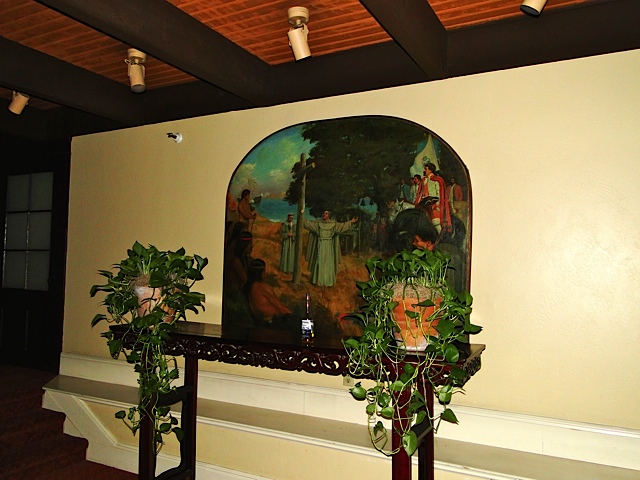 Scattered throughout the hotel were beautiful murals depicting scenes from the California Mission era.  I'll post some more photos from this beautiful place sometime in the future.  I think from the last three posts, you can see that this is a special place.
Posted by Sharon at 1:00 AM 9 comments: 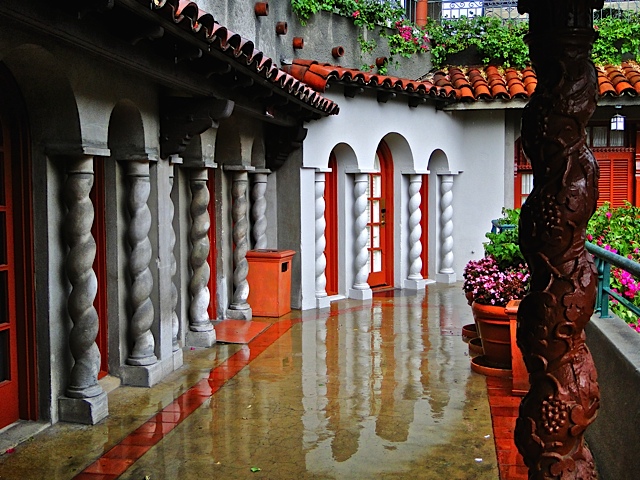 Continuing with my post from last Sunday from the Mission Inn in Riverside California, when I woke on Sunday morning at the hotel I was greeted by a light California morning rain.  I grabbed my camera and headed out because I knew the rain would add another dimension to the photos of the place.  Above is an area of rooms known as Authors Row. 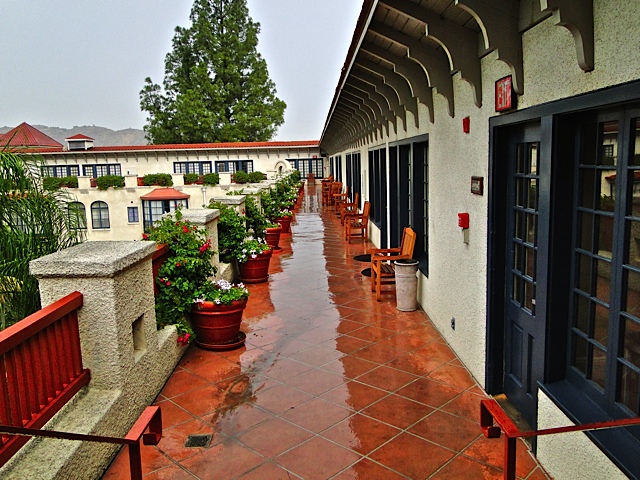 This section probably has a name too but, I'm not sure what it is.  This balcony looks over the pool area. 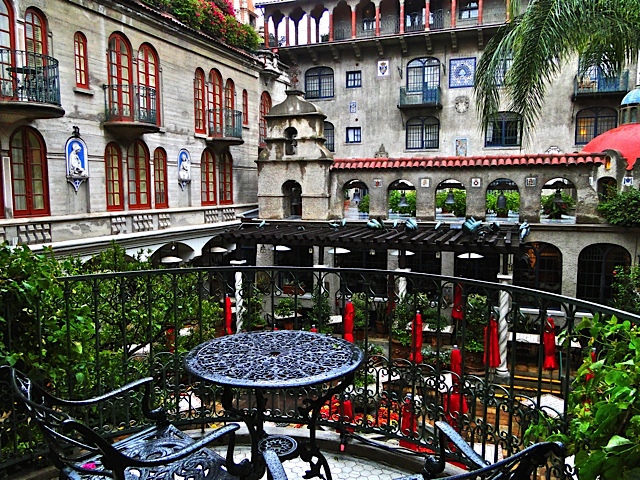 This little balcony spot looks over the area called The Spanish Patio.  When I arrived the day before, the umbrellas were up and people were dining at the tables below. 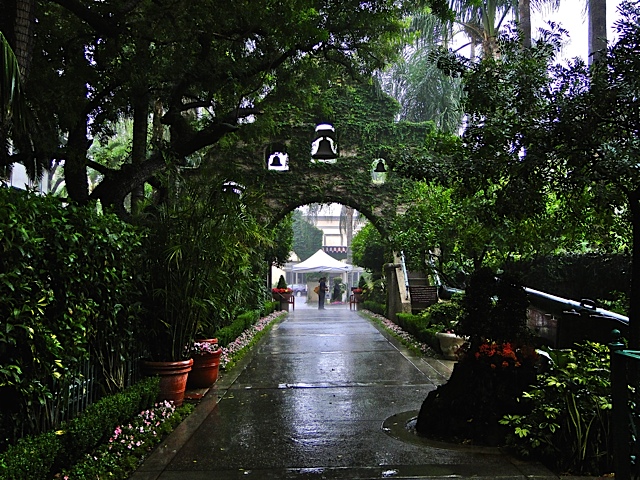 The beautiful entrance to the hotel took on a whole new look when glistening with the morning rain.  I posted another photo of the entrance in November of last year that you can see here.  On my next post, I'll show you some photos from the inside of the hotel.
Posted by Sharon at 1:00 AM 7 comments: