Gallery in the Sun 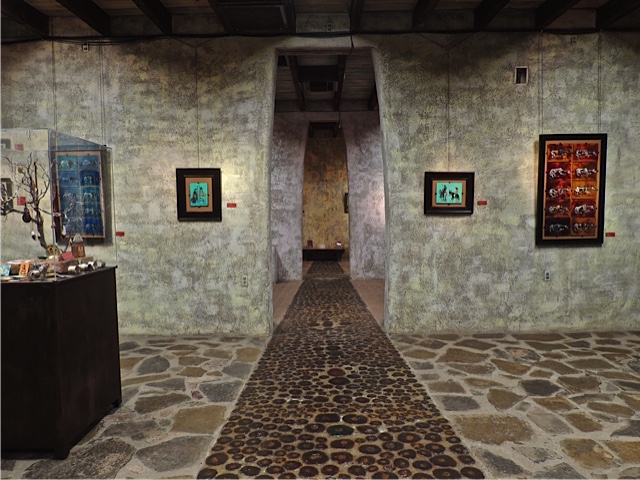 On my recent trip to Tucson, I visited the DeGrazia's Gallery in the Sun, the studio and home of the late artist Ted DeGrazia.  DeGrazia was born and raised in Arizona the son of Italian immigrants.  He moved from the mining town of Morenci to Tucson to attend the University of Arizona and eventually earned three degrees including a Master of Arts. 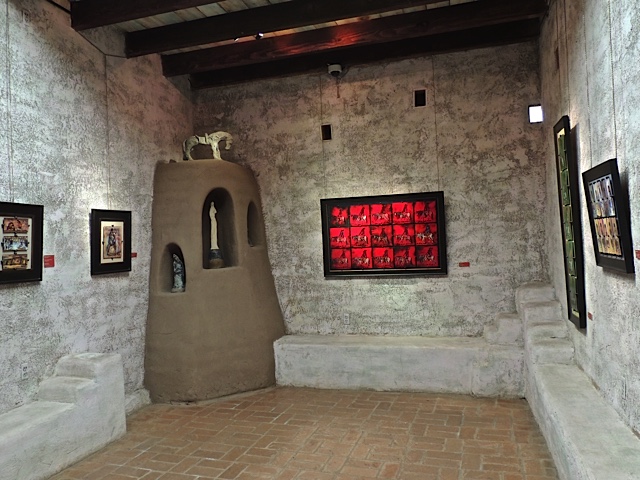 He and his wife bought the then remote 10-acre property where he would build his Gallery in the Sun after the city of Tucson grew up around his original studio.  I wonder what he would have done if he had lived to see the city once again grow up around this property.  The gallery was designed and built by DeGrazia using traditional adobe bricks crafted on-site.  He is said to have built the gallery so that his paintings "would feel good inside". 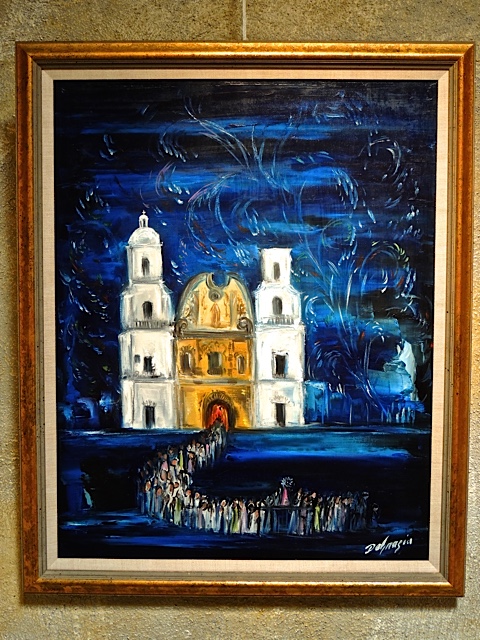 The gallery is home to more than 15,000 DeGrazia originals including oil paintings, watercolors, ceramics and sculptures.

Among those on display is the one to the left titled "Fiesta at San Xavier" painted in 1960.  It's one of my all time favorites. 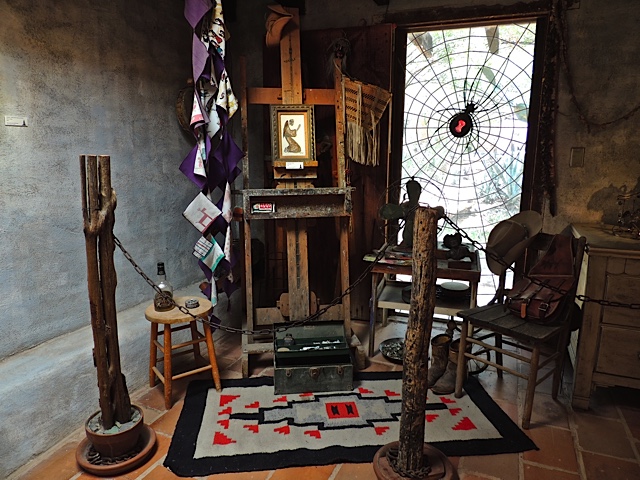 One of the gallery rooms included this display of DeGrazia's paints and easel.  It almost looks like he just stepped away for a moment. 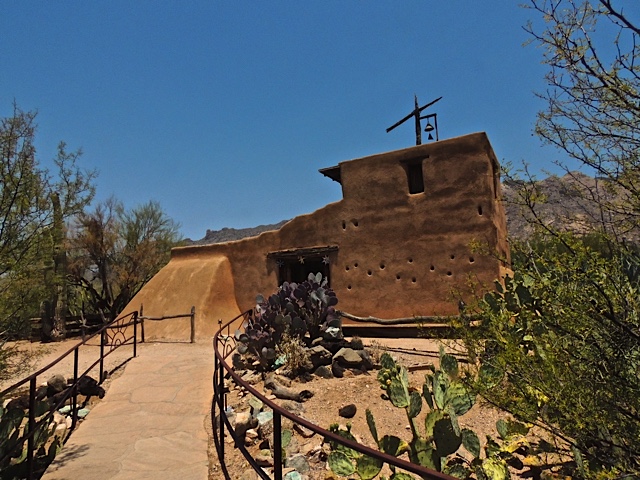 Also on the grounds is this little mission that he built in honor of Our Lady of Guadalupe.  As I approached it I could hear the call of that wind chime bell high up on the top. 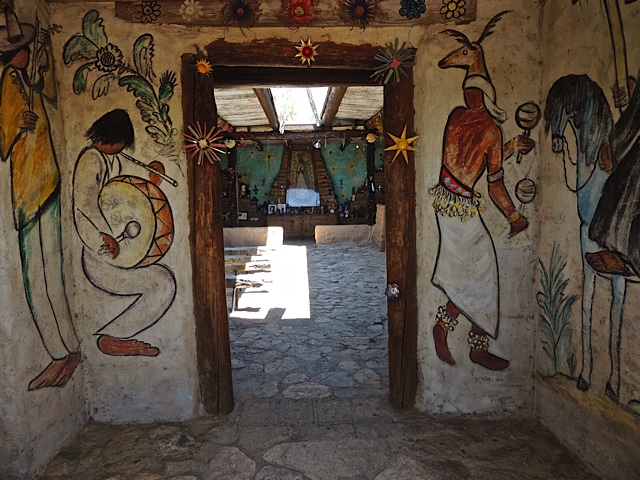 Inside the mission, the roof is open to the sky and the walls are painted with DeGrazia's southwestern inspired art.  Stepping through the door to the mission was almost magical.

In 2006, the 10-acre site was added to the National Register of Historic Places.  The Gallery is open daily from 10 am to 4 pm and there is no admission charge.  It is such a beautiful place, it should be high on the list of places to see when visiting Tucson.
Posted by Sharon at 1:00 AM 6 comments: 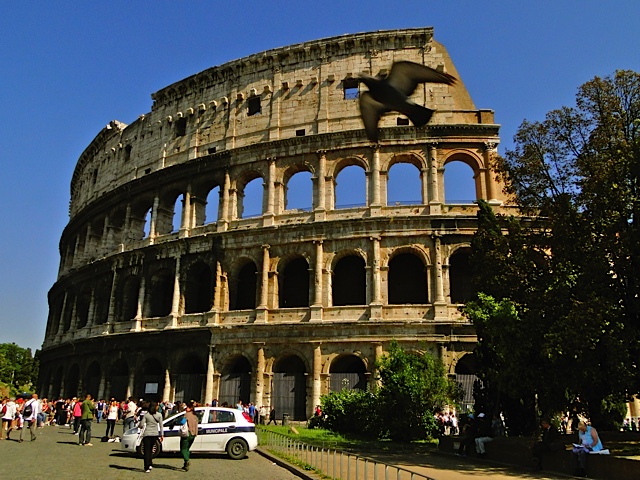 I released an audible gasp as our taxi approached the Colosseum.  The magnitude and beauty of the place was almost over whelming.  I simply couldn't believe that I was actually about to step foot on such an ancient and historic place. 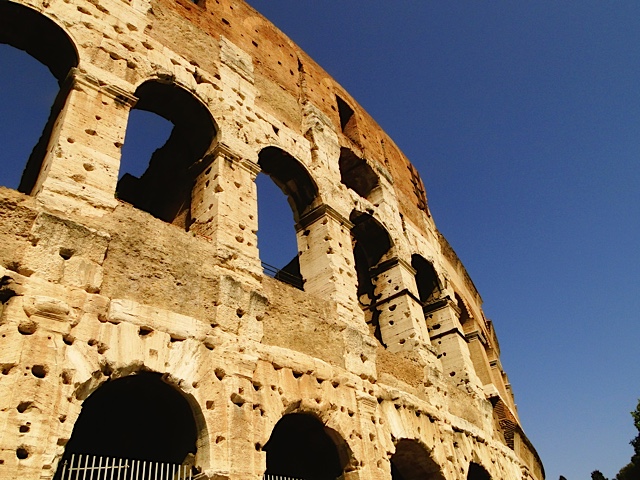 It is the largest amphitheater ever built and is considered one of the greatest works of architecture and engineering.  And, construction began in 72 AD.....imagine that! 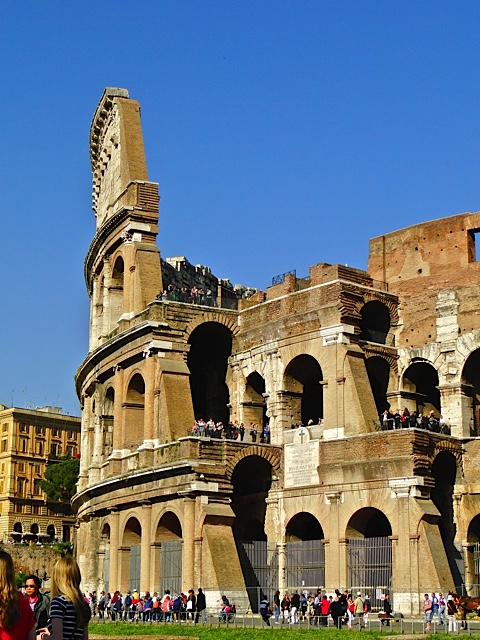 Built under the orders of the emperor Vespasian, it was completed under his successor and heir Titus, just eight years later in 80AD.  To me, that's even more amazing.  Just eight years to build something that will last and be admired for centuries. 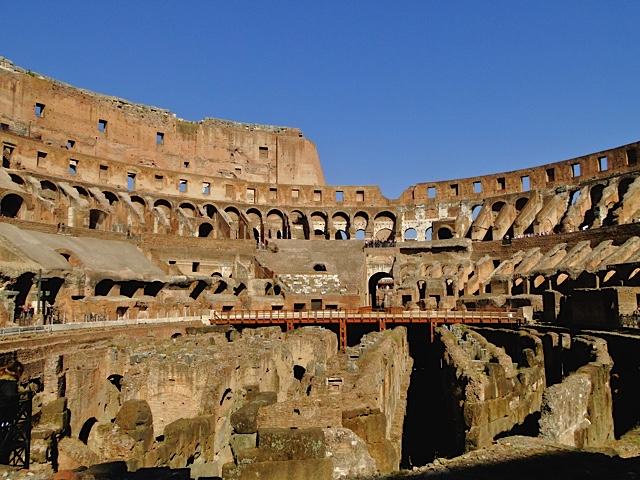 I had read in my travel guides that the wait to  get inside can be quite long but, my timing must have been perfect because within minutes after purchasing our tickets, we were inside this incredible structure where between 50,000 to 80,000 spectators gathered for gladiatorial contests and public events.  When it was in use, it had a sand covered wooden floor build over the top of an elaborate underground structure called the "Hypogeum" which literally means 'underground'.  Little remains of the original floor so you can see directly into the hypogeum and its network of tunnels and cages. 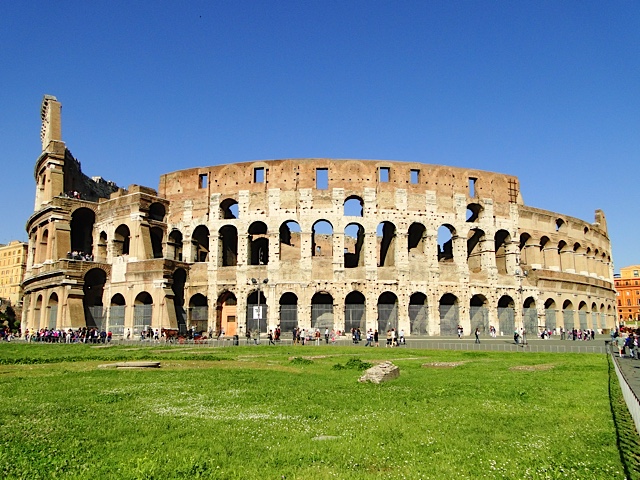 It truly is a masterpiece of architectural design and construction.  I loved standing back and looking at  it and picturing the activity around the place all those eons ago.  Was it bustling with people around it just like it is today? 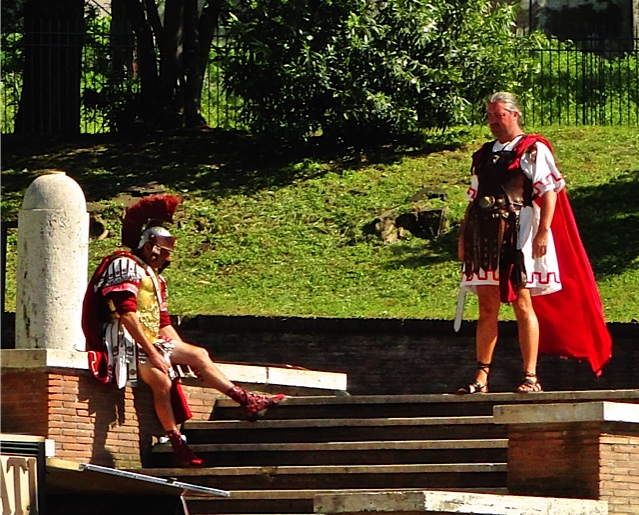 I could even picture a gladiator or two wandering about and guarding the entrance!

At the Lapin Agile 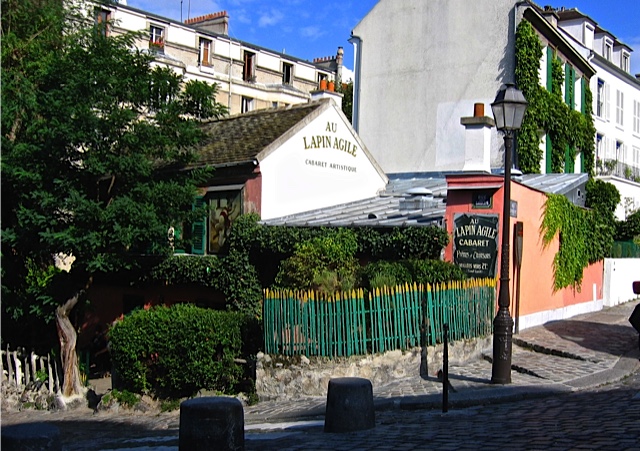 Ever since seeing Picasso's wonderful painting "At the Lapin Agile", I've wanted to see this notorious cabaret for myself and on my last trip to Paris, I made a point of locating it.  After climbing a cobblestoned hill along Rue Saint Vincent (I featured photos from this street on a previous post), I was rewarded with the familiar sight of that pink and green building on the corner with Rue des Saules.  The place has a rather well-worn, ramshackle look to it which is exactly what I was hoping it would look like.  I've seen various paintings of the building and it was refreshing to see it looking just  as I had imagined. 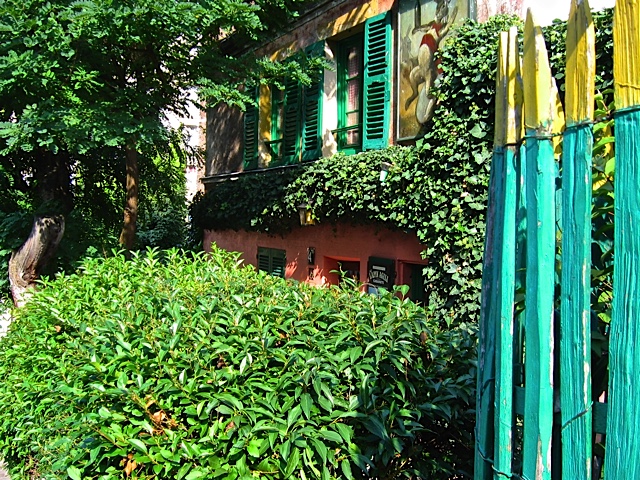 The cabaret was the local Montmartre hang-out for artists, writers, pimps and eccentrics but it was made famous by Picasso's painting and more recently by Steve Martin's play "Picasso at the Lapin Agile".

The Lapin Agile was first called "Cabaret des Assassins" because a band of assassins broke in and killed the owner's son.  In 1875, the artist Andre Gill painted a picture of a rabbit jumping out of a saucepan on the side of the building and locals started calling it "Le Lapin a Gill" or Gill's rabbit.  That name soon morphed into Lapin Agile which translates to nimble rabbit.  That's what it's been called ever since. 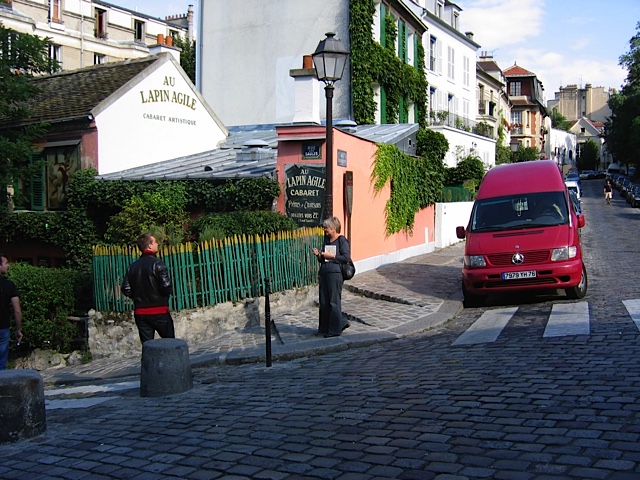 One of my friends took this photo of me standing by the lamp post at the corner.  Since I had dragged them along on my search for this place, they figured I needed a photo to remember it by.
Posted by Sharon at 1:00 AM 7 comments: 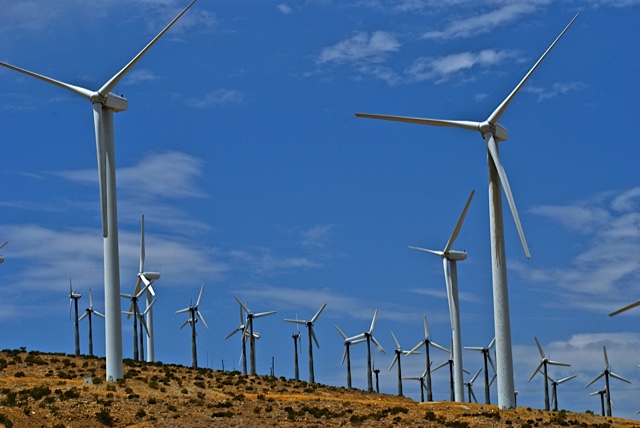 If you drive to the Los Angeles area from Phoenix along Interstate 10, you will see a number of wind turbines as you near the city of Palm Springs.  The hillsides to the north of the road are covered with these wind turbines. 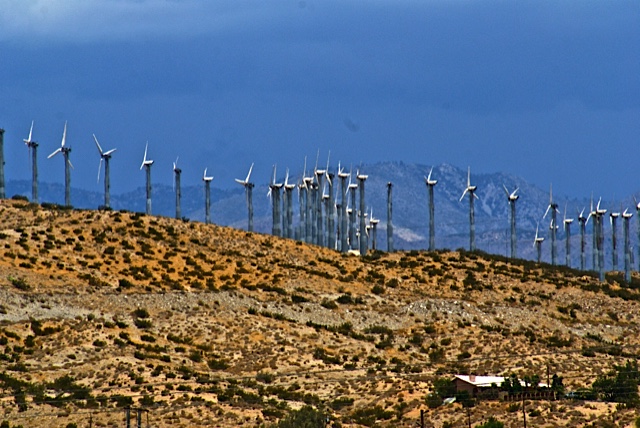 California produces 5% of it's electricity using wind power.  As of 2013, there were 5 places in California where wind turbines were producing electricity.  This one is located on the eastern slope of San Gorgonio Pass in Riverside County.  That pass is one of the windiest places in Southern California.  I do enjoy seeing them when I start to head down the mountain and into the Coachella Valley.
Posted by Sharon at 8:30 AM 5 comments: