A short trip to Brighton 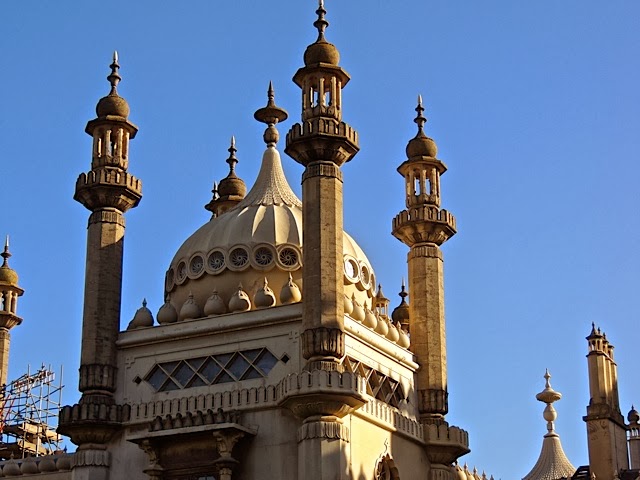 When I made the short journey to Brighton in November, I had one thing in mind.  I was going to get a photo of that outrageously ornate Royal Pavilion.  I had it pictured in my mind and my image was very much like this photo taken by someone I follow on Flickr.  But alas, the best laid plans often go awry. 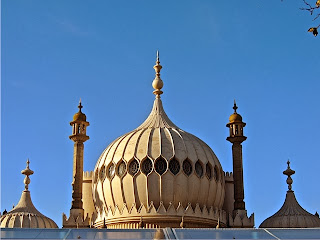 Erected smack-dab in the middle of the lawn in front of the pavilion was a giant temporary tent.  You can just see the edge of the tent roof in the photo to the left.   I didn't take a photo of it because quite frankly, it was not a picturesque sight.

I made due with several photos of the ornate details of the outside of the pavilion and I took the tour of the inside and I'm so happy I did.  The inside, although a little down-at-heel, was spectacular.  There were some rather amazing chandeliers and antiques to feast my eyes upon. 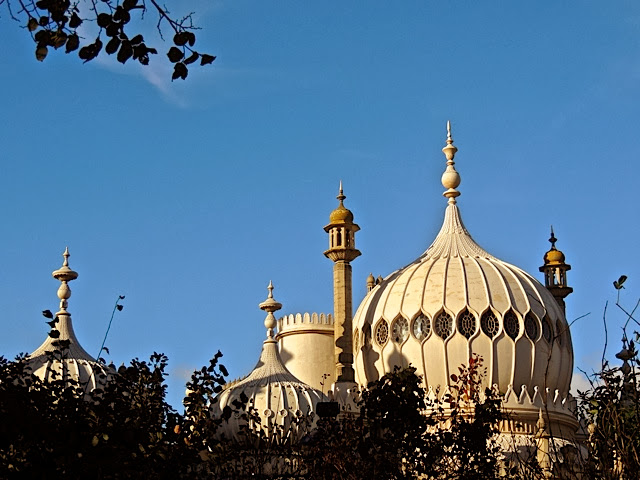 The Royal Pavilion was built by King George and became a royal playground for the king and his circle of friends.  After King George's death, the pavilion was used as a residence by King William IV and by Queen Victoria until 1845.  In 1850 it was sold to the town of Brighton after the interior had been stripped of its furnishings.  The long process of restoration started and still goes on today and with the cooperation of the Royal Family, there are many beautiful pieces on loan to be displayed inside. 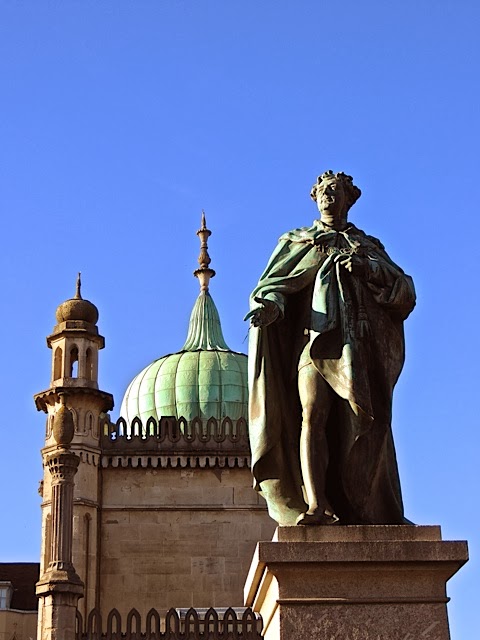 Outside the Royal Pavilion, stands this statue of King George IV by Sir Francis Chantrey.

All in all, I'm glad I went.  The tour was great and I even had a tasty lunch right inside the pavilion at their small dining room.  However, getting that one photo is still on my list of things to do.

Email ThisBlogThis!Share to TwitterShare to FacebookShare to Pinterest
Labels: England

Exploring on a whim! 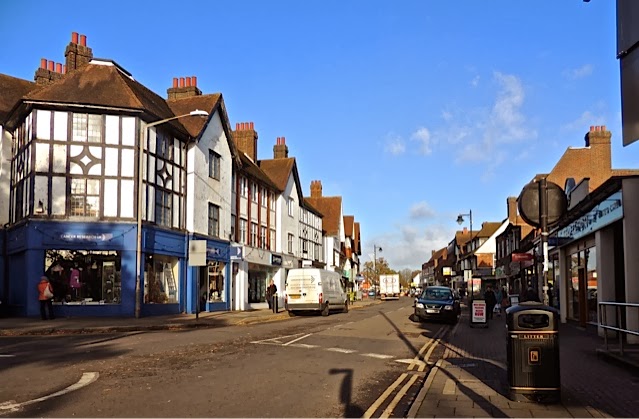 The first time I visited London back in the 1980’s, I fell in love with the city and I’ve found myself returning many times and always finding new things to experience and old favorites to enjoy again.  Needless to say, I’ve made use of London’s mass transit system known as “the tube” to get from one side of the city to another.  If you have ever used that system, you know how efficient it is and you might also know that each train is announced by its end point destination.  I’ve always been curious about those end point destinations so on this trip I decided that I would ride one of the lines all the way to the end and get out and look around.  That’s how I happened to visit the pretty village of Amersham located at the very north-western end of the Metropolitan line.  It was interesting to see how the crowds on the train thinned out the further out we got, dwindling down to just me and two other people at the very end.

The city is located 27 miles northwest of London and is split into two districts, Old Amersham in the valley and the newer and rapidly growing Amersham-on-the-hill located around the rail line.  It was the newer section that I explored on my short visit there. 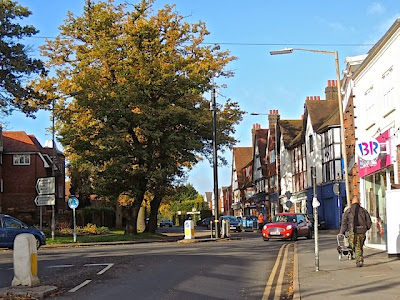 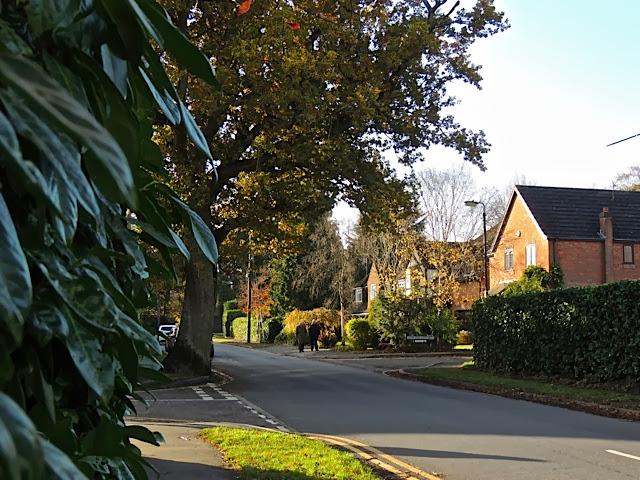 I also ventured into some residential streets where I found lovely tree-lined lanes and beautiful brick homes with half-timbered trim. 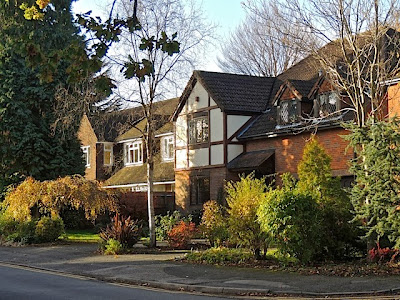 I enjoyed this exploration so much, that I’m sure I’ll do it again the next time I’m in London.  Maybe I’ll head to an eastern end point the next time. 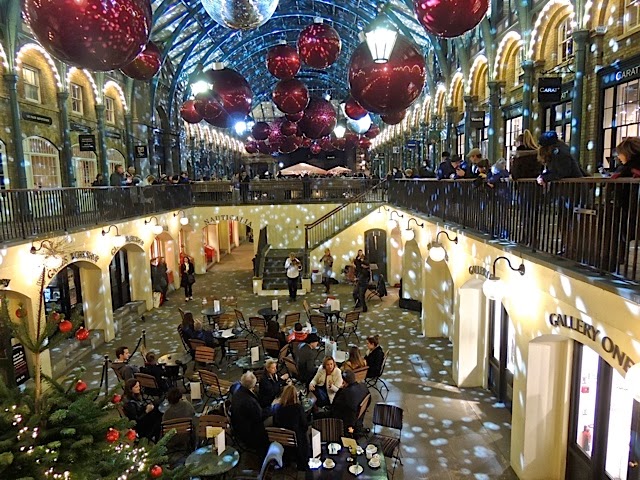 There were certainly a wide variety of beautiful Christmas decorations in London when I was there but, I think I enjoyed all the decorations at Covent Garden the best.  The night I was there, the disco ball was spinning and the light it created looked like snow falling on the jazz group that was playing downstairs. 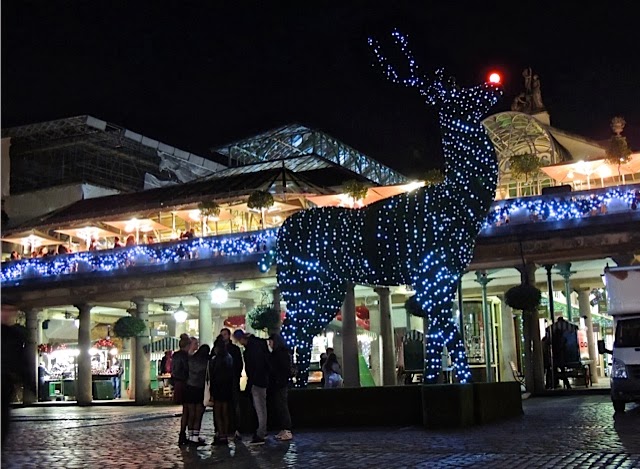 Just outside of the building, this giant "Rudolph" was the perfect meeting spot for shoppers. 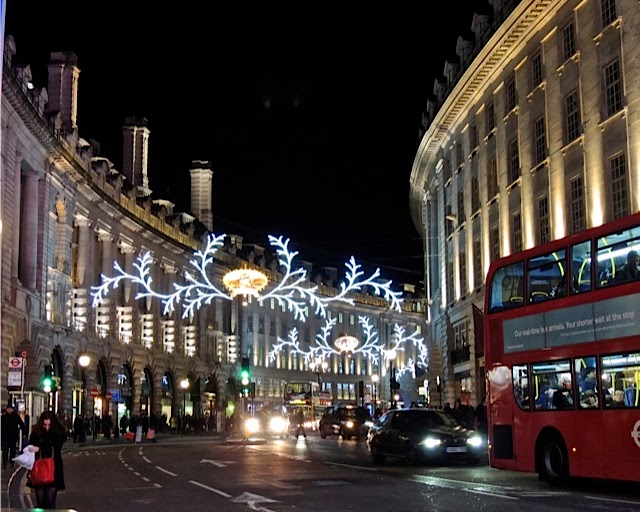 On Regent Street, these pretty Christmas lights were keeping the street well lit. 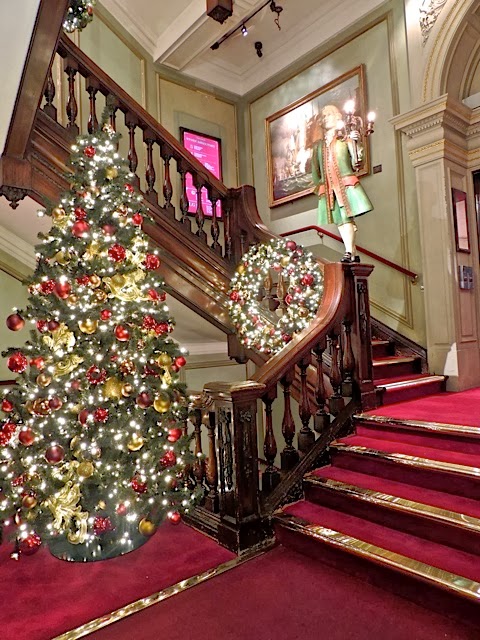 And inside the entrance to Fortnum & Mason, the grand staircase was wearing festive holiday decorations.
Posted by Sharon at 1:00 AM 14 comments: 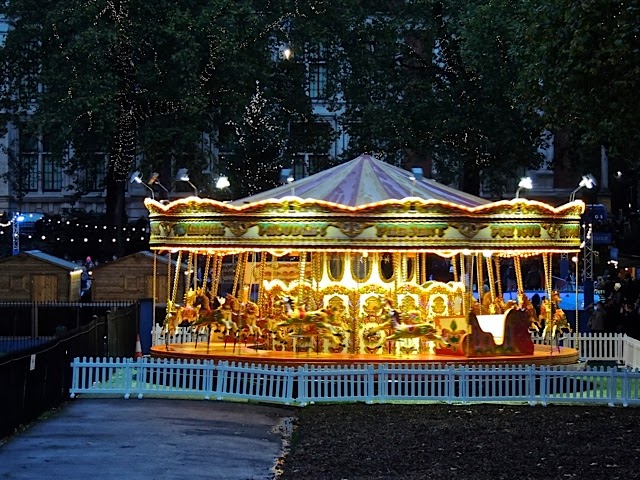 My latest trip to London was in November and by that time most of the Christmas decorations are up all around town.  Today I'm featuring a few of the scenes I enjoyed.  Above is a carousel that was in front of the Natural History Museum.  Behind it you can see a sliver of the ice skating rink that was also there for holiday revelers to enjoy. 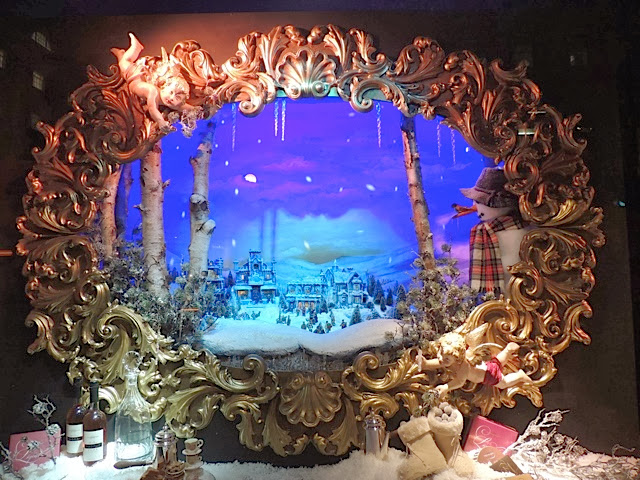 The famous department store Fortnum & Mason had all of it's windows decorated with a variety of Christmas scenes.  This was my favorite. 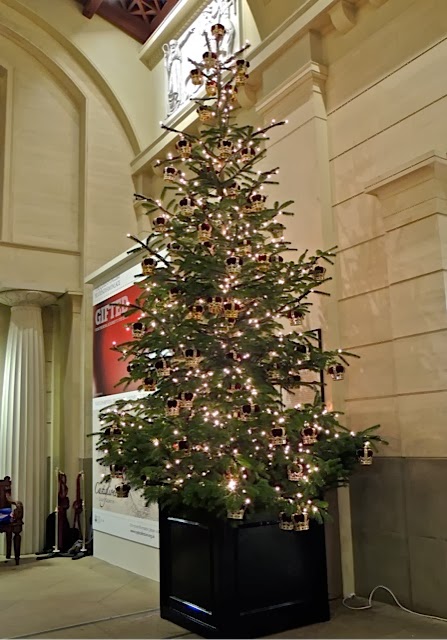 A Christmas tree decorated with royal crowns was located at the entrance to the Queen's Gallery at Buckingham Palace.  Of course it should have royal crowns to adorn it's branches.

On Sunday I'll show you more beautiful Christmas decorations!
Posted by Sharon at 1:00 AM 10 comments:

A Bird's Eye View of London 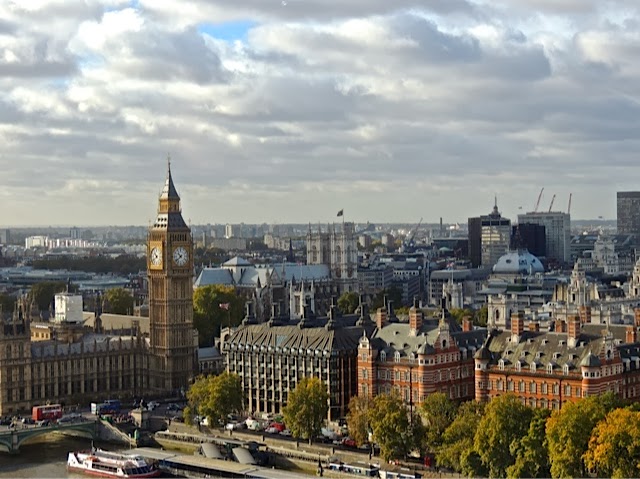 Personally, I think that riding on the London Eye is a must for every visitor.  The views in all directions are breathtaking and if you've been to London as many times as I have, you will recognize all the key historic sites when you see them below you.  When the ride begins, you start to rise and you begin to see buildings like Parliament, Big Ben, and Westminster Abbey much more clearly than you see them from the ground. 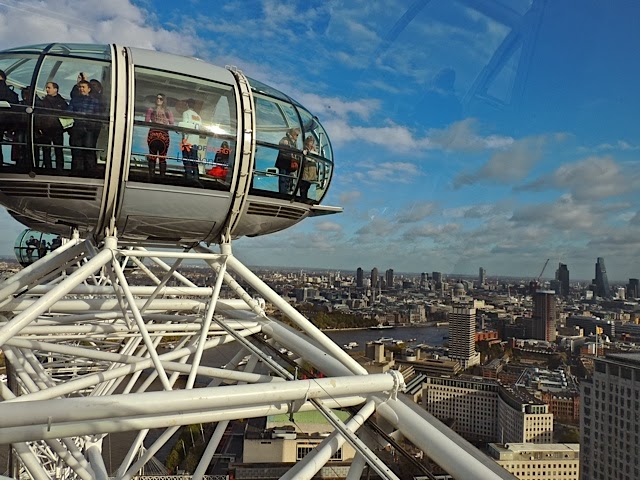 As you get higher, you see in much further distances and when you are at the top, you can see the passenger compartments that are next to you very clearly.  In fact, you could almost have friends in that next car and snap their photo.  I didn't but, what a great idea. 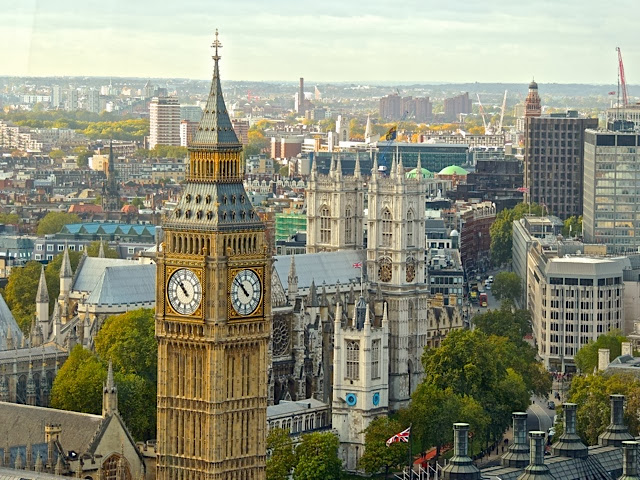 Using my telephoto, I could zoom in and get a great view of Westminster Abbey with Big Ben looming in the foreground. 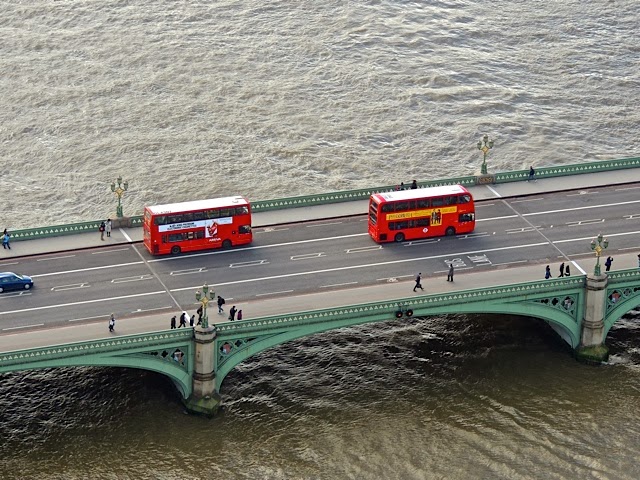 I even zoomed in on Westminster Bridge to get a shot of two of those iconic red London buses passing by.  I've been warned that a ride on the "Eye" is very expensive but looking at my Bankcard statement, I see that it was only $24.63.  I really don't think that's too expensive for the fabulous views you get and the wonderful photo opportunity it provides.  In addition, it's just great fun!
Posted by Sharon at 1:00 AM 9 comments: 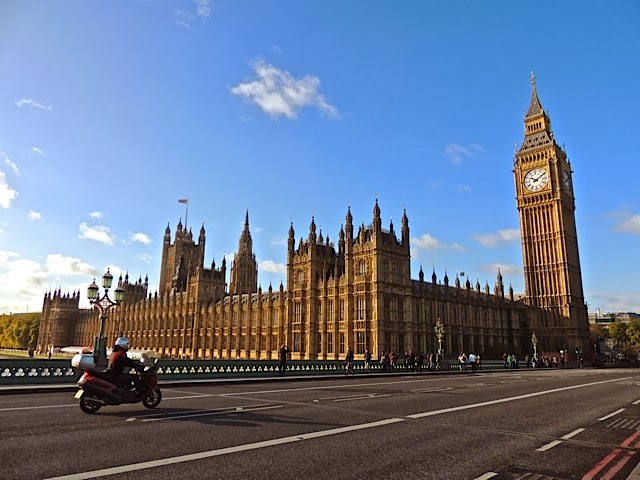 The Parliament Building in London is universally recognized and almost everyone has heard of Big Ben standing tall at the very end.  I arrived here around 9:00 AM so that I could get the sun shining on the building and I lucked out with a gorgeous blue sky to go with that golden glow.  After taking some photos, I walked over to the London Eye and took a ride on that giant ferris wheel.  I got more great photos of this icon from high up.  I'll post a couple of those on Sunday!
Posted by Sharon at 1:00 AM 9 comments: