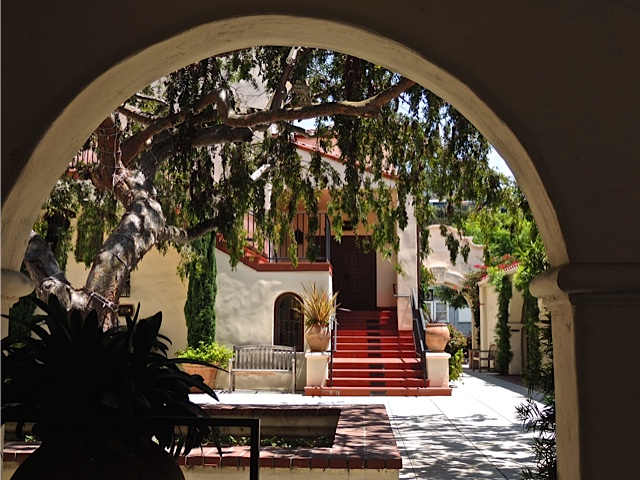 I've probably mentioned this before but, one of my favorite things to do when I travel is to walk and explore new places.  I've found so many beautiful and sometimes unusual things just taking a long walk.  Last August when I was in Laguna Beach California, I walked from the beach to the hillside exploring the community.

One of the places I found is the Laguna Presbyterian Church located at Forest Avenue and 2nd Street.    The Spanish-Colonial architecture of the church fits in perfectly with the Southern California environment but, on this occasion I discovered the charming atmosphere of a hidden courtyard behind the church. 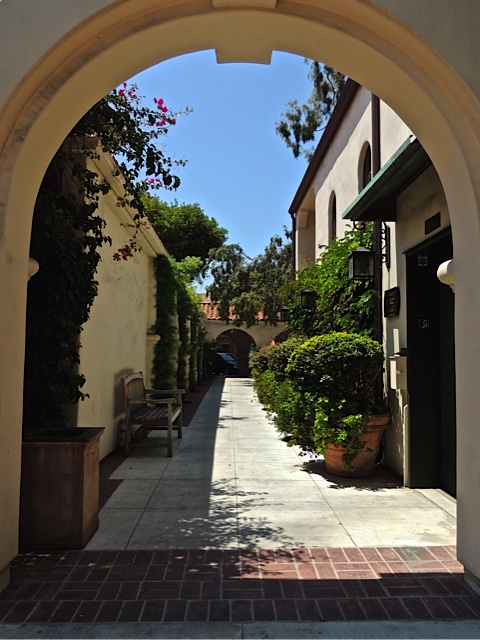 The area reached from one street to another with arches and plants and rustic benches along the way.

Another gem of this church that might go unnoticed by most tourists in the area, is the rose garden located on one side of the church.  The vast array of beautiful roses blooming in this little area enticed me to stay awhile and enjoy the gorgeous blooms.  There is a sample of them below. 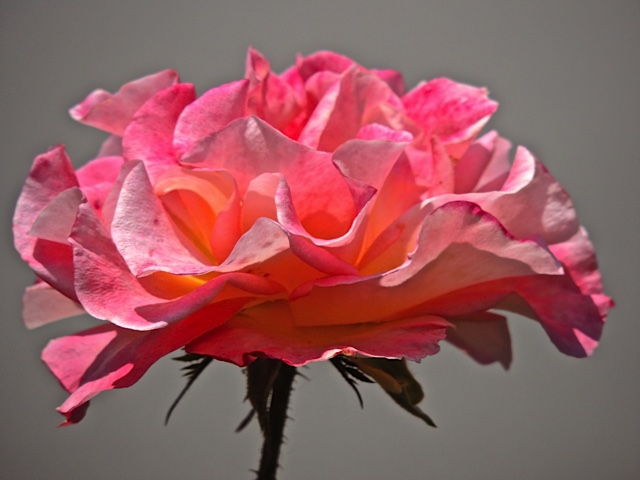 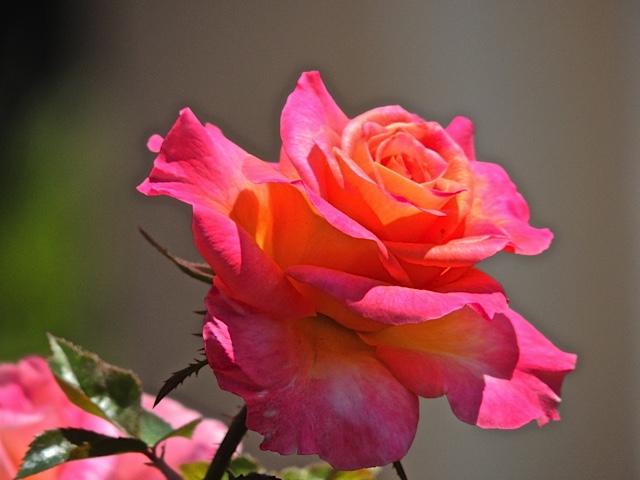 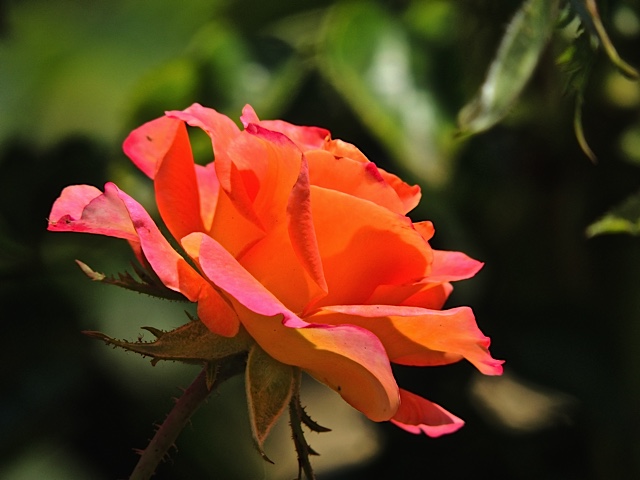 It was a good place to stop and smell the roses and then explore the beautiful architecture of the buildings that surround the garden and that is exactly what I did.
Posted by Sharon at 1:00 AM 8 comments: 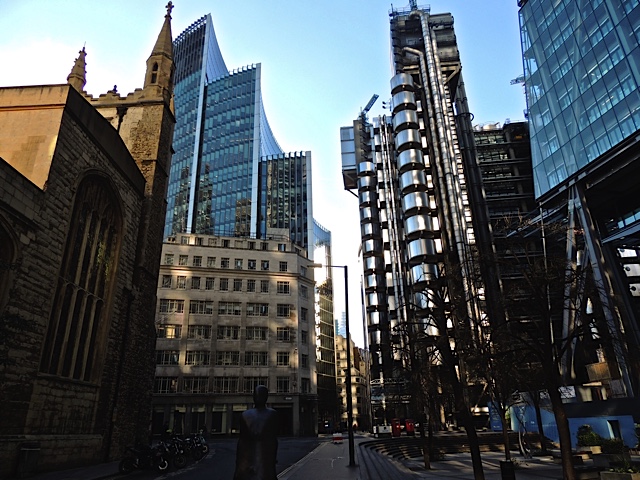 Ever since my very first trip to London, I've been fascinated by the very unique Lloyd's of London building and on every subsequent trip, I found a way to walk around it once more.  On that first visit, the building of steel tubes, columns and pipes seemed huge and imposing but, on this last trip I noticed that it has become almost hidden away in the jungle of much bigger glass and steel monoliths. 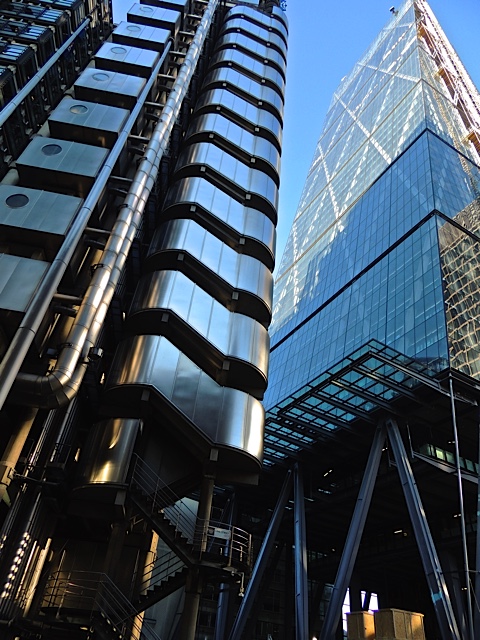 Lloyd's is located on Lime Street in the main financial district in the City of London, that ever changing part of London that keeps transforming itself with newer and more extraordinary buildings.

I learned that the Lloyd's building was completed in 1986 so it must have been brand new when I saw it the first time. 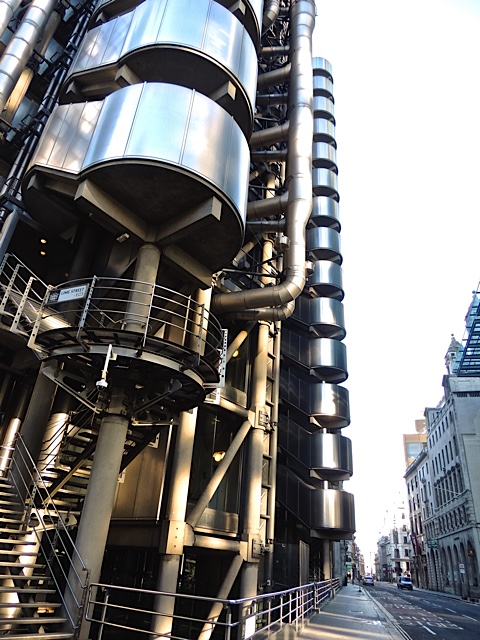 The building was designed by architect Richard Rogers, the same architect who was involved in the design of the Pompidou Centre in Paris.  At the time it was built, it was considered innovative in having its services such as staircases, lifts, electrical power conduits, and water pipes on the outside of the building leaving the inside an uncluttered space. 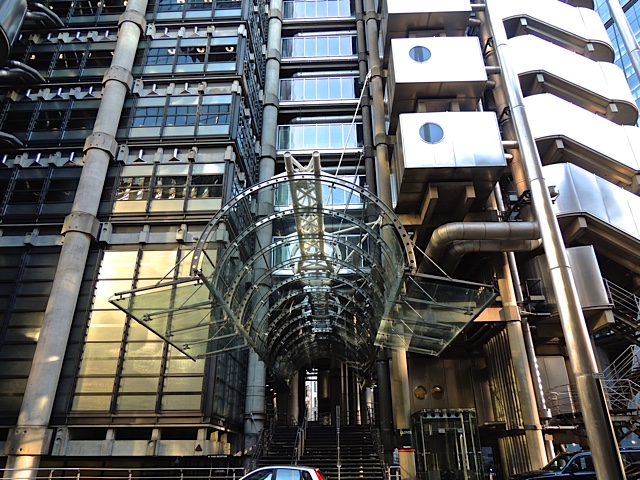 When I took my dad to London back in 2000, I made a point of walking past here to show him this crazy looking building.  He wasn't impressed.  In fact, he said "That's awful, lets move on."

I would love to see the inside someday but the building is not open to the public.  It is however, open once a year during the "Open House London" annual event.  The 2015 "Open House" will be September 19 and 20.  Maybe I should plan another trip!
Posted by Sharon at 1:00 AM 8 comments: 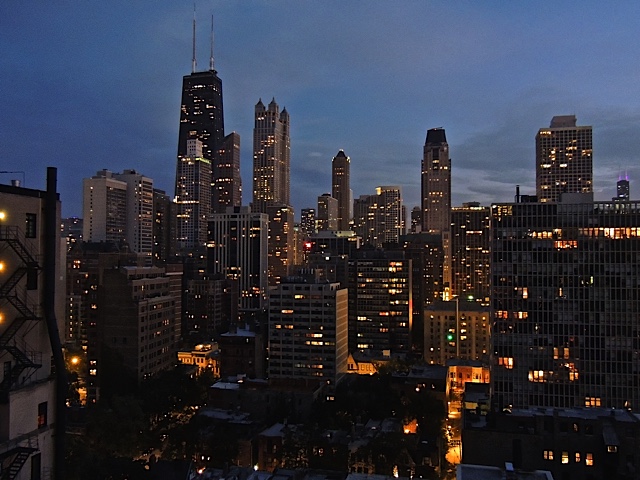 Back in October, I had a picture of the Chicago skyline taken from this view point in the late afternoon when it was still light.  I mentioned that I was there for a wedding that took place on the rooftop of The Public Hotel.  Since I was there for the entire evening, I was able to take several skyline shots as the sky darkened and day turned to night. 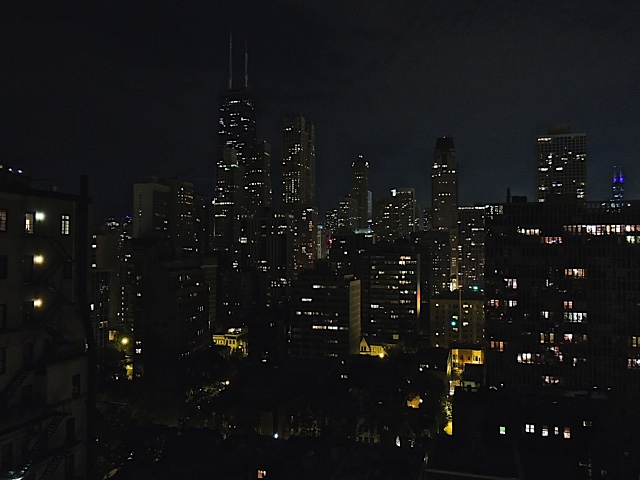 It was fantastic to watch the changes in that gorgeous skyline and to see all the twinkling lights in those wonderful skyscrapers out there.  When it was completely dark, it was like floating silently in that canyon of buildings.
Posted by Sharon at 1:00 AM 7 comments: 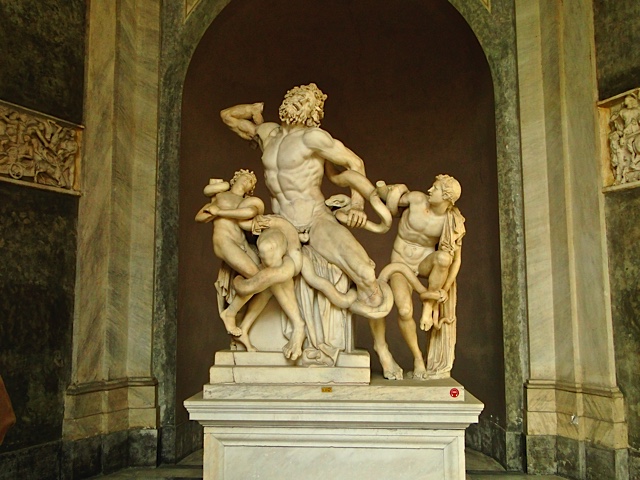 The origin of some of our common sayings can be found in a variety of places but, I wasn't expecting to find this one inside the Vatican Museum.  I'm sure you've heard the saying "Beware of Greeks bearing gifts".  Well, the story that goes with the statue pictured above is the source of that saying.   The statue depicts the fate of Laocoon after he tried to warn the Trojans not to let the giant wooden horse into the city.  His warning was "do not trust the horse Trojans.  Whatever it is, I fear the Greeks even bearing gifts."  It is said that Athena, angered by his attempt to thwart the ruse, sent giant snakes and sea serpents to kill Laocoon and his two sons.

The statue of Laocoon and his sons struggling with the serpent was unearthed in 1506 in a vineyard near Rome.  Pope Julius II, a classicist sent Michelangelo to examine the statue.  Upon his recommendation, the Pope immediately bought the statue and put it on display at the Vatican.  It is said to be one of the very first acquisitions that would become the Vatican Museum.
Posted by Sharon at 1:00 AM 7 comments: