A Dream that Won't Come True 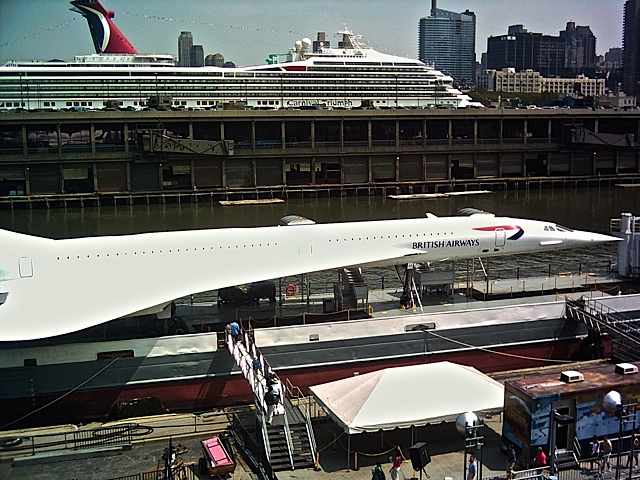 For as long as I can remember I've wanted to one day fly on the Concord.  From the moment I first heard about this airplane, I always thought that one day I'd have the opportunity.  Unfortunately, that's not going to happen.  However, I did get to see the inside of one a few years ago when I was visiting New York and decided to tour the Intrepid Sea, Air and Space Museum.  There is one positioned on the deck that can be toured.

I've had several encounters with the aircraft when it was flying.  On my very first trip to Europe, I saw passengers boarding one as my plane was taxing at Heathrow airport.  In 1986 I visited the Worlds Fair in Vancouver British Columbia and it happened that while I was there, Prime Minister Margaret Thatcher was making a quick visit to the Great Britain pavilion and the Concord she was on made a slow circle around the city giving everyone on the ground an opportunity to watch it go by.  Also in the late 80's, I worked with a woman whose husband treated her to a trip to Paris, flying over on the Concord in time for dinner.  All of these events further fueled my dream of one day crossing the Atlantic aboard this Dreamliner. 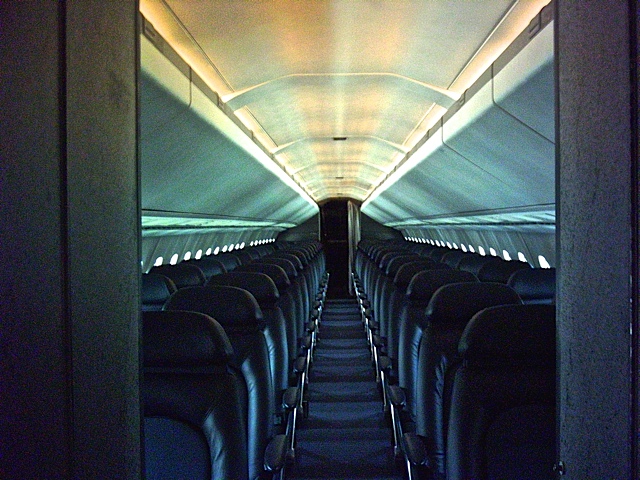 The inside of the aircraft is much smaller than you might imagine.  There is only room for four seats across and very little headroom.  If you are tall, you will have to duck a bit.  There were only 20 of these planes built and only 14 were ever in commercial service.  British Airways and Air France each had seven.  It could fly to destinations in less than half the time it took other jets.  The fastest recorded time was on February 7, 1996 when a flight flew from New York to London in 2 hours and 52 minutes (aided by a strong tailwind).  That alone is worth dreaming about. 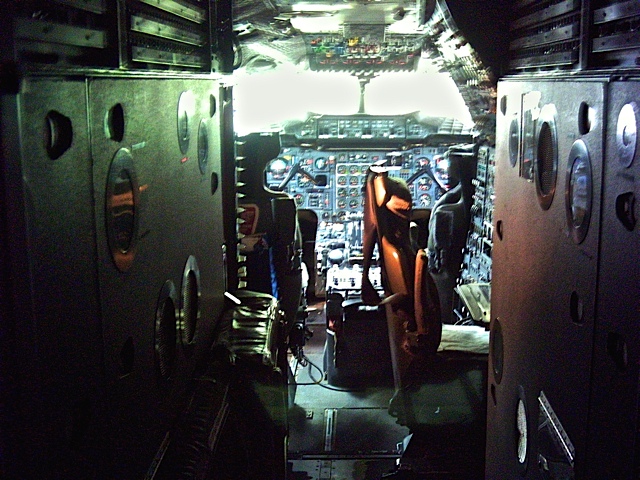 On the tour of the one on display on Intrepid, you get to take a peek inside the cockpit.  There are quite a lot of dials and gauges in there but, pilots who flew this plane have remarked how it handled beautifully and how they loved flying it.

The Concord was retired in 2003.  The decision to discontinue commercial flights was made for economic reasons.  The planes were extremely expensive to fly.  The decision was further bolstered by the crash of one of the planes in 2000 and then the 9/11 attack on the U. S. in 2001 created a serious downturn in the aviation industry.  When Airbus decided to discontinue maintenance of the aircraft, it's fate was sealed.

To make my visit to see the Concord a little bit ironic, when I got to the airport for my flight home, my U.S. Airways flight was taking off from the former "Concord" gate.  The signs designating that gate are still visible. 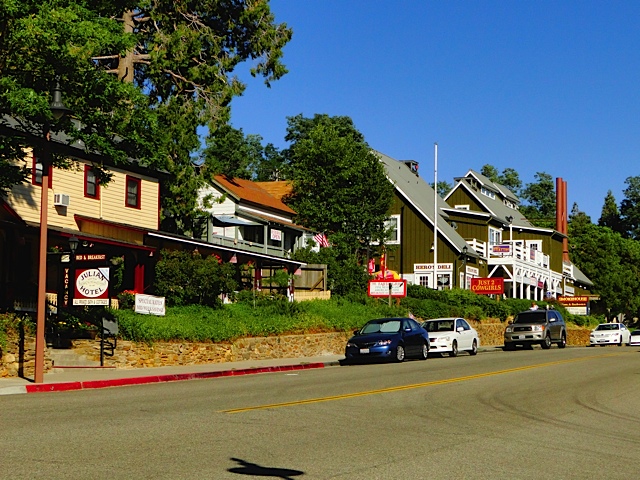 Julian California is locate in San Diego county in the mountains outside of San Diego.  It's economy is mostly based on tourism and agriculture because it's a perfect summer weekend retreat.  The town is high enough to be much cooler in the summer than most of southern California and high enough that it gets snow in the winter. 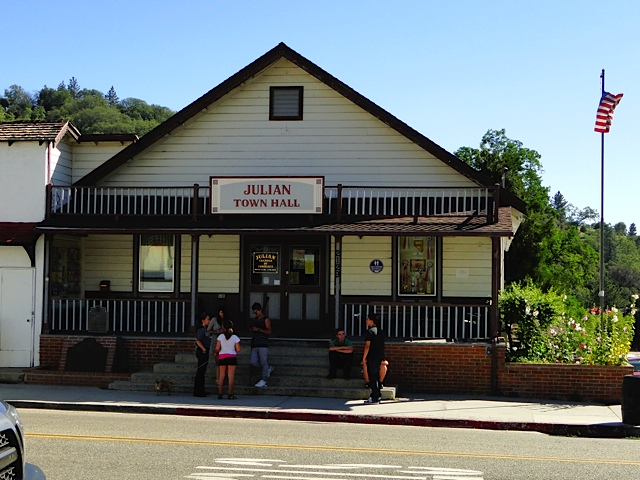 The town is full of little shops and lots of restaurants, lodges and hotels to accommodate the summer crowds who have headed to the mountains to cool off. It's become known for it's pies!  Many Californians drive up for the day and have a slice of pie at one of the many restaurants.  They might even take a pie home with them. 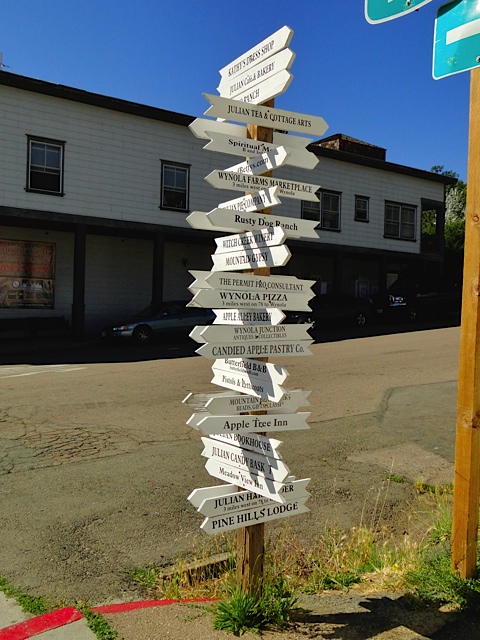 It's a small place but if you are looking for a particular business, you can consult this sign to point you in the right direction.

A meal to remember... 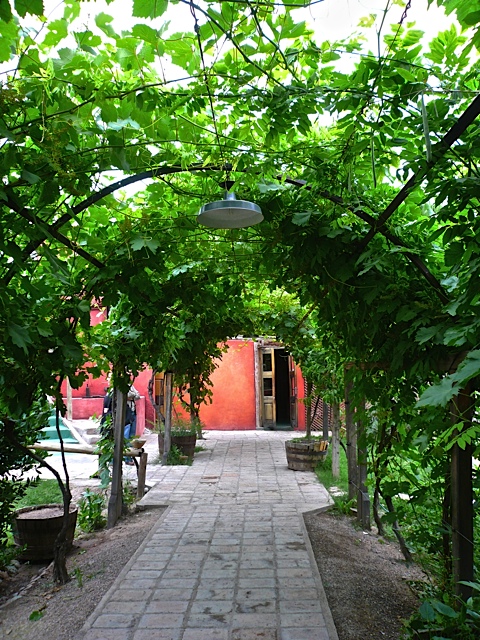 The Cava de Cano winery is tucked in the suburbs of Mendoza Argentina and was once the home of the area's governor, Don Guillermo Cano who established Mendoza's first wine festival in 1935.  The current owner Claudio Mellimaci renovated the property and turned the cellar and other rooms into dining rooms.    Imagine walking down this vine covered path and entering that door at the end to find a dining room already laid with meats, cheeses, vegetables and other appetizers.  It was one of those "wow" moments. 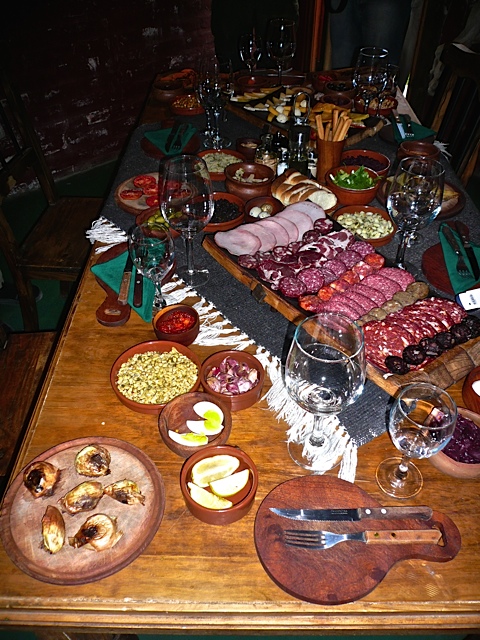 The table was so full of wonderful treats, we didn't know where to begin.  But wait, this was only the appetizer.  The grand meal was yet to come and each course was served with a selection of the wonderful wines of Cava de Cano.

I think we might have been there for 3 hours enjoying the huge and delicious meal of roasted meats, pasta, salads, and of course, fabulous empanadas.  All those noble wines served with each course just added to the pleasure. 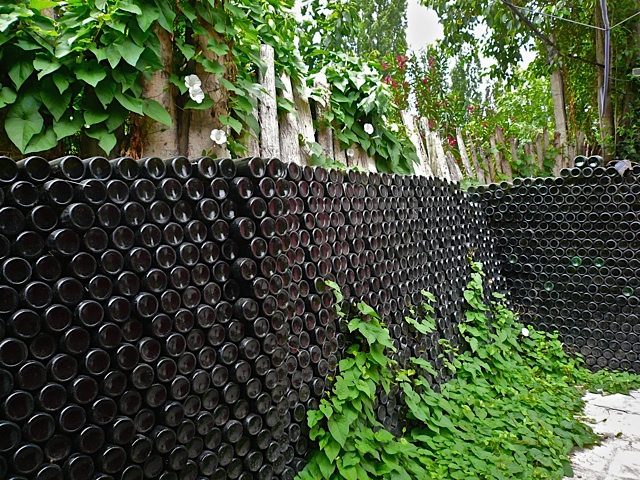 As we rolled ourselves out of there and back to the car, we passed this very picturesque wall made of wine bottles.  I have a cropped version of this photo framed and hanging in my kitchen.
Posted by Sharon at 1:00 AM 4 comments: 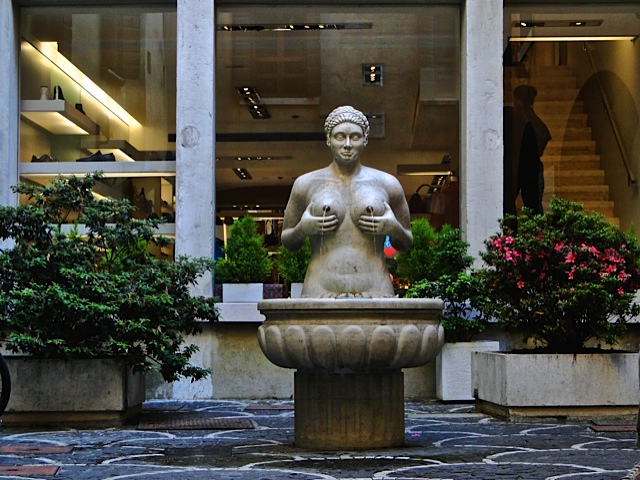 This statue is hidden away in a small courtyard outside of a clothing store in Treviso Italy but, I learned that it has a very interesting history.  It is called La Fontana dell Tette and it was originally built in 1559.  The story states that in honor of each new mayor, the fountain would spew red wine from one breast and white wine from the other breast for three whole days.  The public could drink as much wine as they wanted during those three days.  At some point in it's history, the statue was considered a bit of a bad influence so it was moved to a museum for a while before it found it's way to this location in more recent years.  Today it spews fresh water and passers-by can drink from it....if they dare. 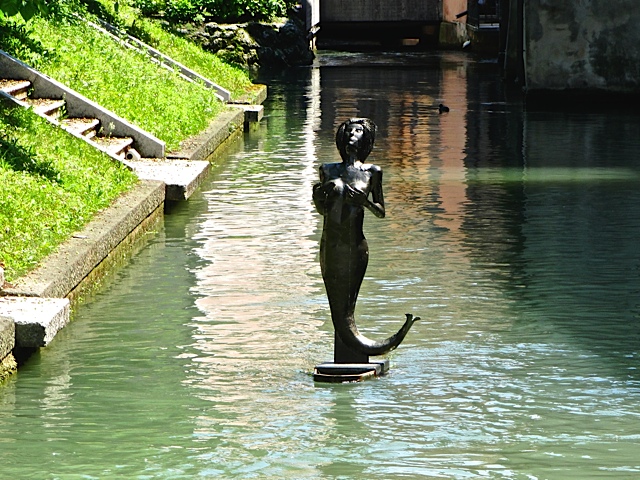 In the canal in Treviso there are several sculptures that blend well with the water.  This one is of a mermaid who appears to be mimicking the pose of the statue above. 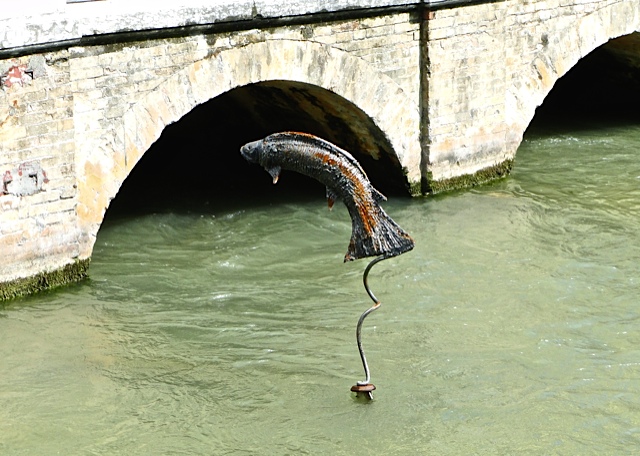 In different places you can see fish sculptures popping up out of the water too.
Posted by Sharon at 1:00 AM 6 comments: