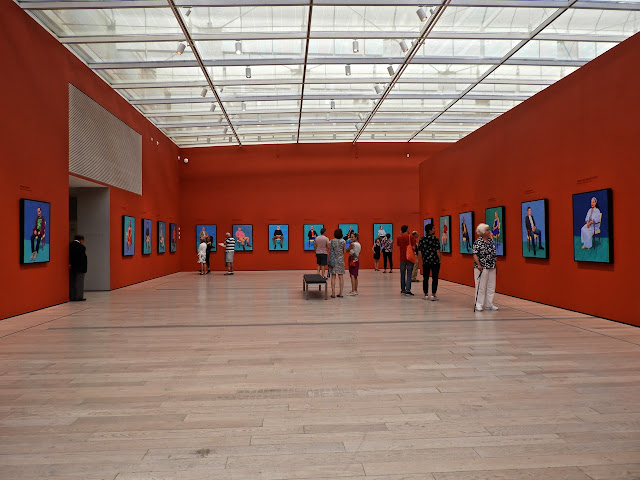 On my recent trip to California, I decided that I needed to spend some time in the Los Angeles area because it had been a long time since I had been to the Los Angeles County Museum of Art (LACMA) and almost 20 years since I had visited the Getty Center.  So, I set two days aside to indulge in the Los Angeles Art scene.  My first stop was LACMA to see the David Hockney exhibit called "82 Portraits and 1 Still Life".  I had read about this exhibit and was anxious to see it and I'm so glad I did. 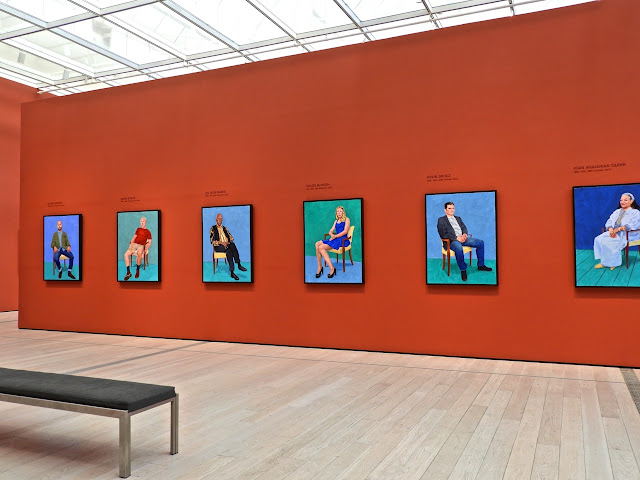 Hockney painted 82 portraits of people in his life and each portrait was painted from the live sitting over a span of three days.  He calls it the "20-hour exposure".  The paintings were not commissioned and were meant to be displayed all together as they are in the exhibit.  What an impact they make with their brilliant colors against an equally brilliant background.

Here is just a sample of the individual portraits. 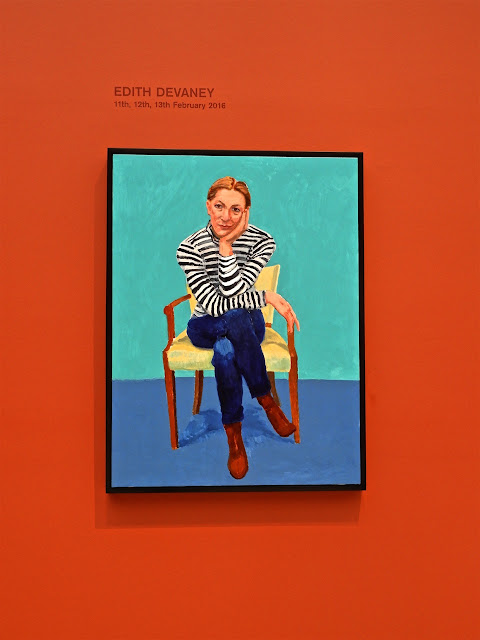 Edith Devaney is the curator at the Royal Academy of Arts in London. 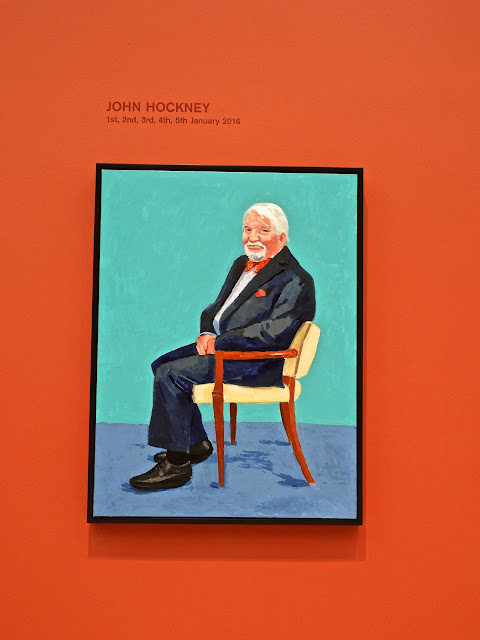 This one is John Hockney, the artist's brother who is a storyteller, writer and musician in his own right. 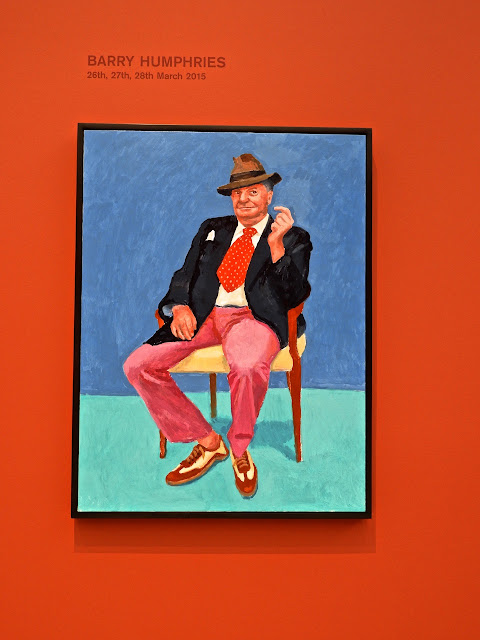 One of my favorite portraits was this one of Barry Humphries, actor.  You might know him as Dame Edna.


Everything about this great exhibit was visually stimulating.

A Place of Pilgrimage 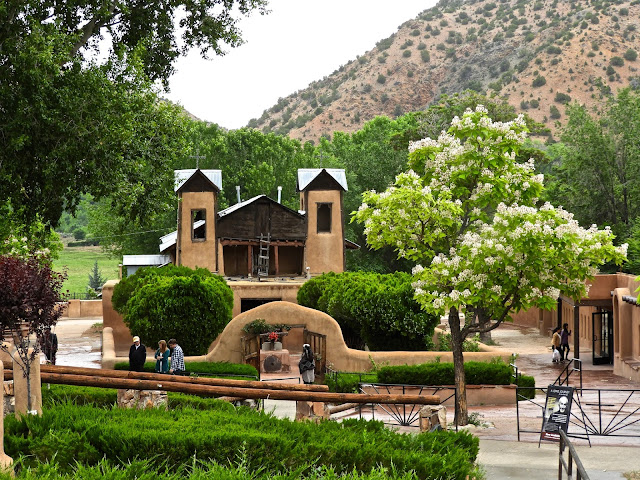 I've seen dozens of paintings of this tiny little church so I decided that while I was visiting Santa Fe, I should take a drive out to Chimayo to see it in person. 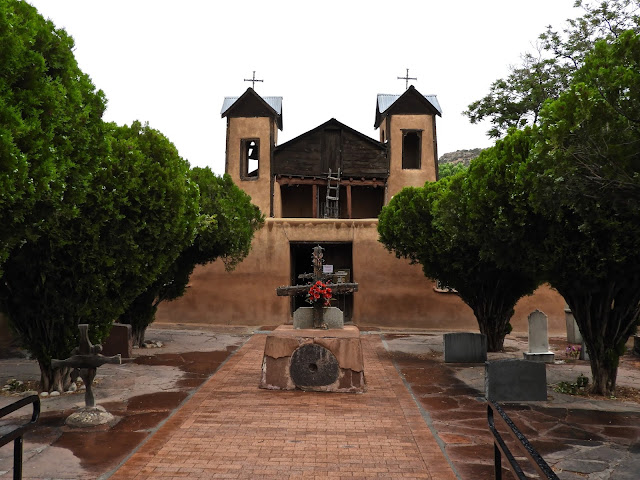 I had read that the El Santuario de Chimayo was considered a place of pilgrimage for many people which I guess explains the crowds of people there on a rainy Saturday morning.  The shrine was designated a  National Historic Landmark in 1970 and the church itself was built in 1816. 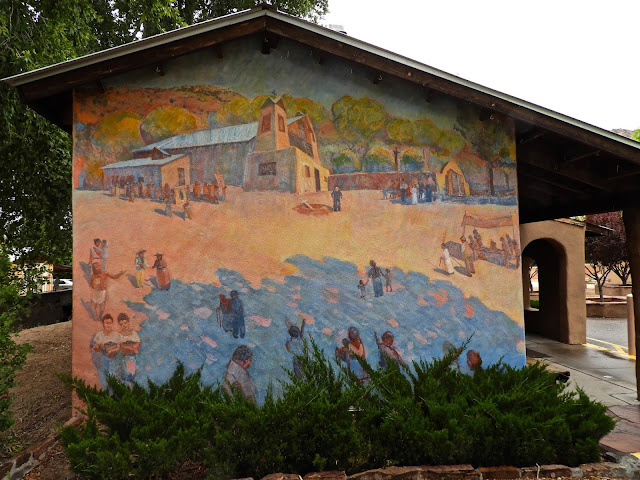 This mural depicting the church and village area in earlier times was on the side of one of the buildings near the little chapel. 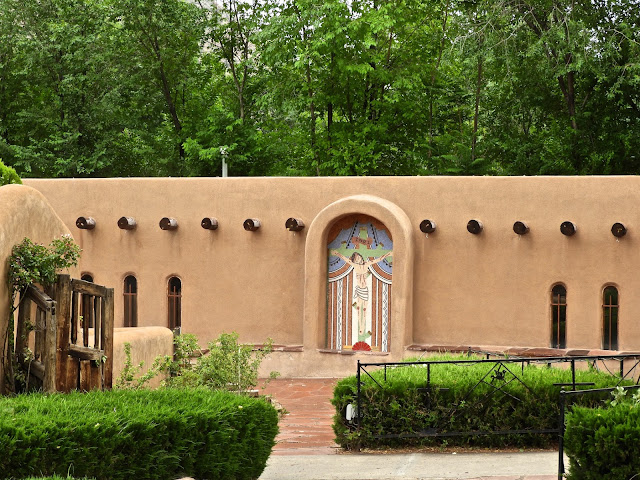 On the other side was another building that held offices and the gift shop. 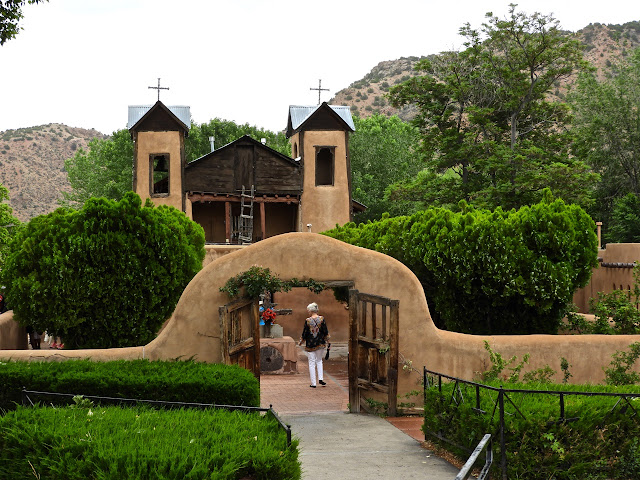 My goal was to see this chapel that has inspired so many artists and I wasn't disappointed.  It is every bit as picturesque as it looked in all those paintings I've admired.
Posted by Sharon at 1:00 AM 3 comments: 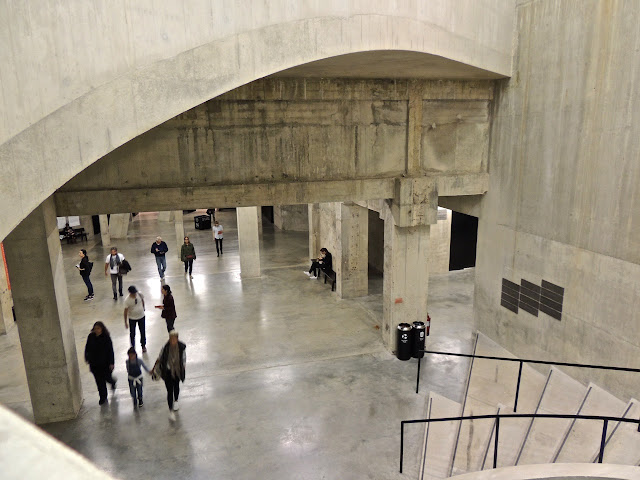 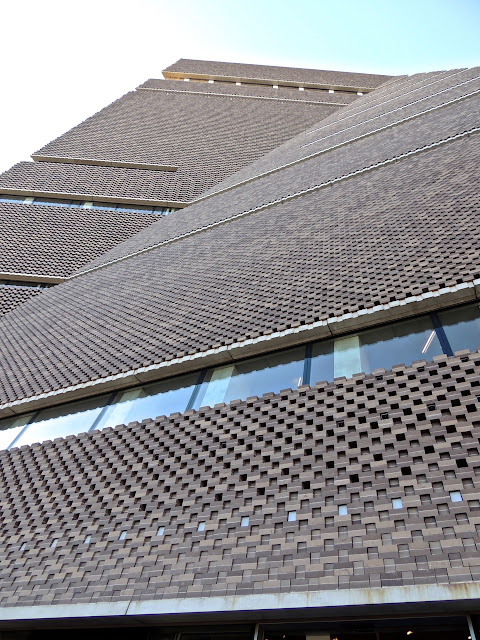 When I was in London the last time, back in the fall of 2016 one of the many places I made a return visit to was the Tate Modern Art Museum.  You are probably all familiar with that giant building on the south bank that used to be a power station at one time.

Since the last time I visited the museum, a new tower has been added to the back of the museum expanding the exhibit space by quite a large amount.  I got to see that tower for the first time on that 2016 trip.

The photos above and below show the minimalist tunnel-like area that connects the two buildings. 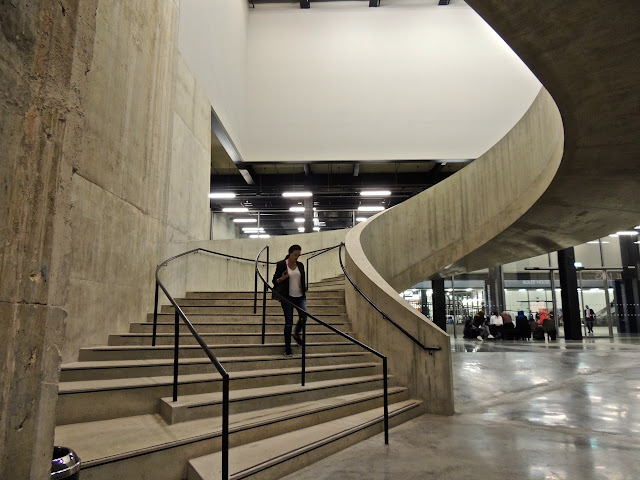 I was impressed by how well this area blends with the architecture of the older building.  The connection between the old and the new spaces has been done in a very modern and aesthetically pleasing way. 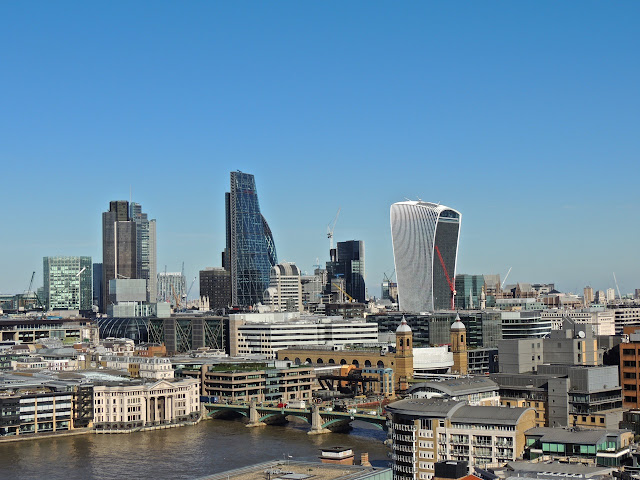 What I enjoyed the most about the new wing was the grand observation deck on the top of the tower. The views from up there were simply spectacular and they were available in every direction.  The view above looks toward all the distinctive buildings that make up the business district of the City of London. 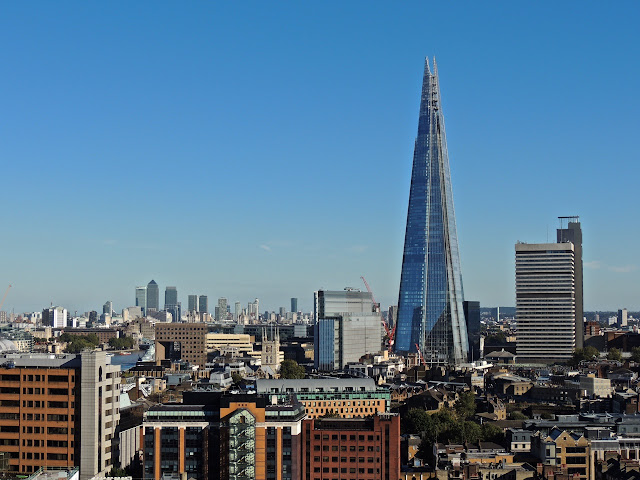 This view takes in "The Shard", one of London's newest skyscrapers.  As you can see it was a beautiful day to take in the view.  We could see all the way out to Canary Wharf and all the tall buildings out there. 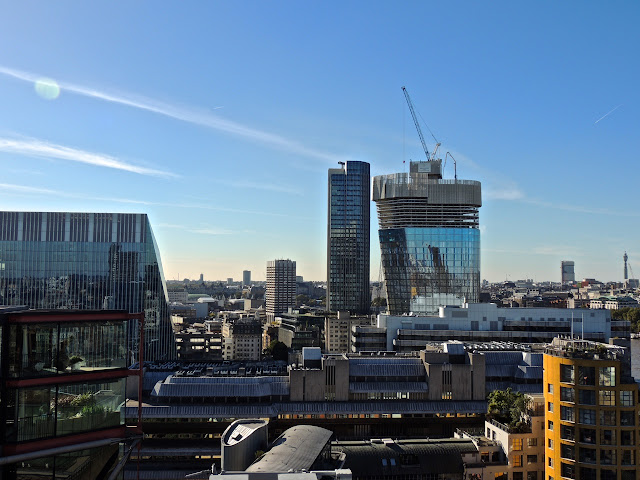 In another direction we see more buildings, some of them under construction.  That one that sort of leans a bit must be completed now making me wonder what the completed building looks like. 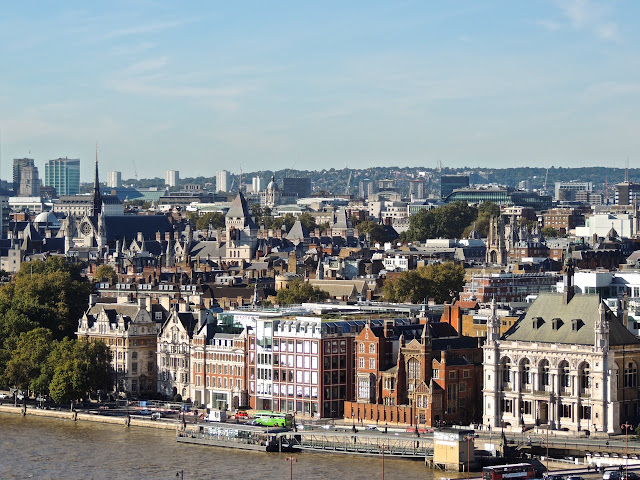 This view takes in some of the varied buildings along the Thames and the dense city structures behind them.

The famous Tate Modern now has one more feature to make it a must see stop for every London visitor. 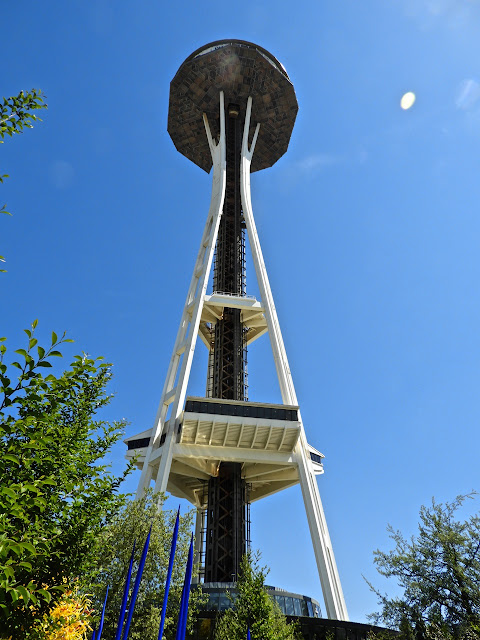 I don't think anything screams Seattle more than the iconic Space Needle.  Seeing it will immediately identify the city.

So when I traveled to Seattle back in May, it seemed only right to once again take the elevators to the top and take in the view.

It's hard to believe that the Space Needle was built way back in 1962 for the 1962 World's Fair.  It's currently undergoing a 100 million dollar renovation that is scheduled to be completed this summer.

None of that construction got in the way of our trip to the top or the views from up there. 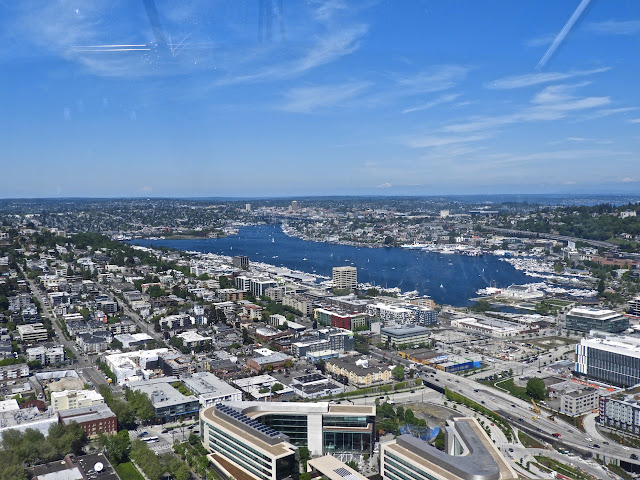 We couldn't have asked for a better day for taking in those fabulous views.  The air was clear and the sky was blue. 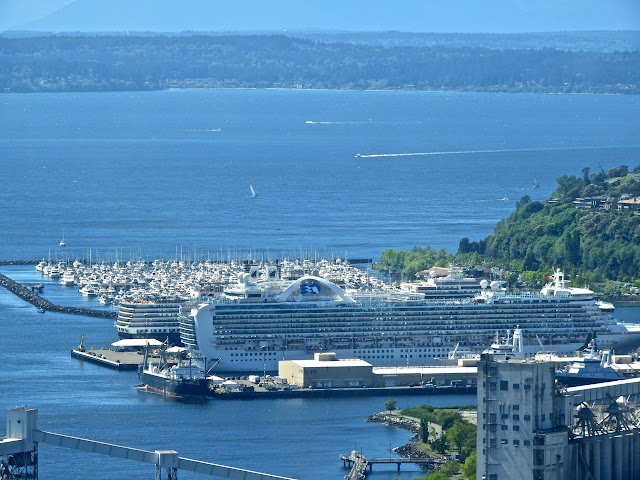 We could even spot some cruise ships docked in the harbor below. 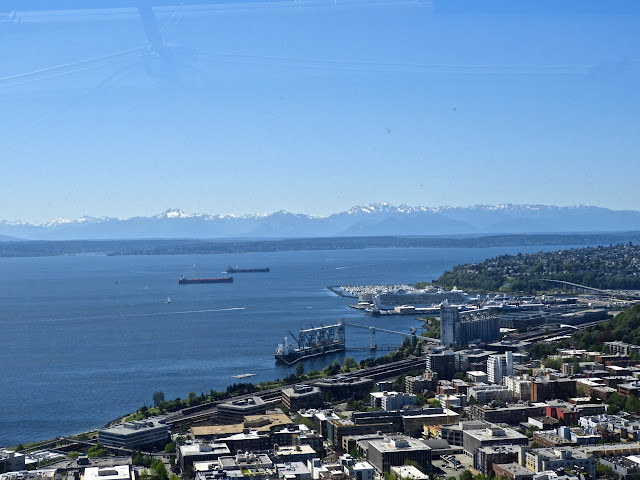 Out in the distance, we could see snow on the top of the Mountains. 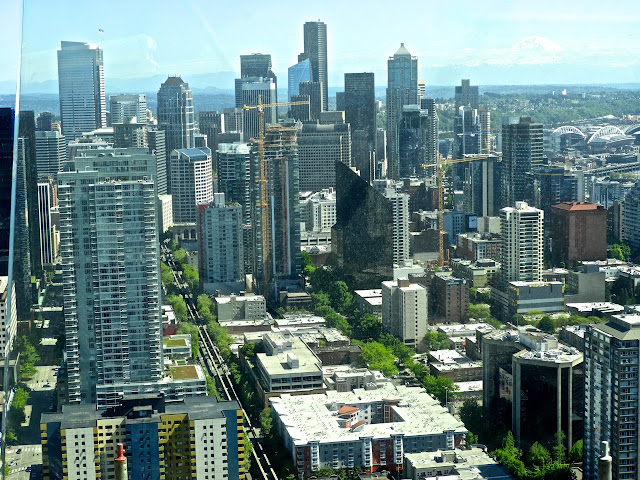 Being a city girl at heart, my favorite view was toward the center of Seattle and it's gorgeous skyline of high-rise buildings.  I could even see the monorail tracks below.  We took the monorail from downtown to make our way to the Seattle Center where the Space Needle and many other attractions are located.
Posted by Sharon at 1:00 AM 7 comments:

Email ThisBlogThis!Share to TwitterShare to FacebookShare to Pinterest
Labels: Seattle 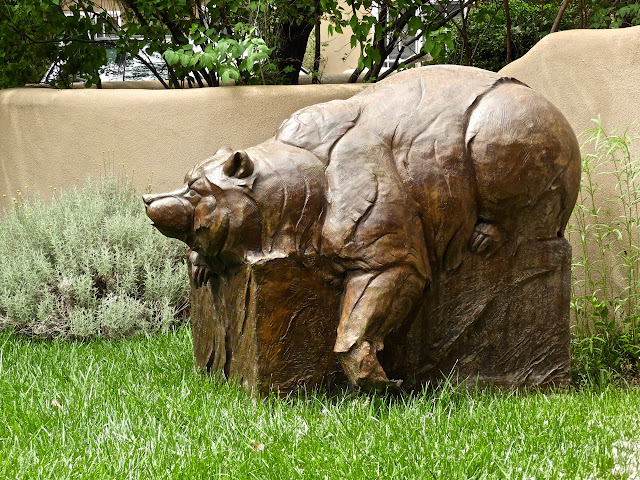 Last week I posted that I made my very first trip down Canyon  Road in Santa Fe New Mexico on my most recent trip to the city and I discovered a plethora of art works and creativity.  Today I'll show just a sample of a few of the pieces that caught my eye.  Such as, this big brown bear relaxing in a garden. 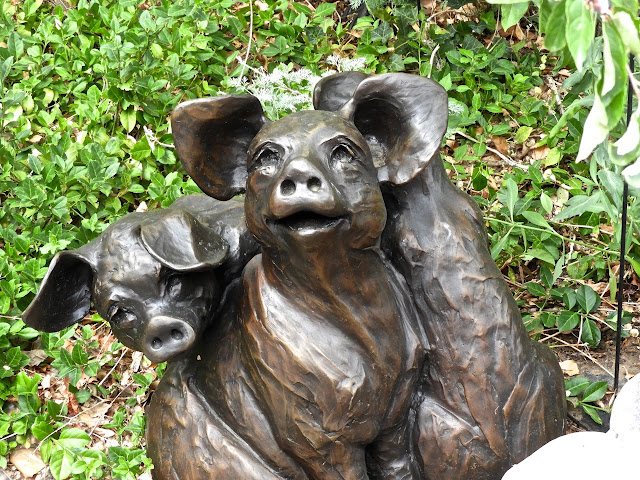 Or how about "Hog Heaven" by Robin Laws. 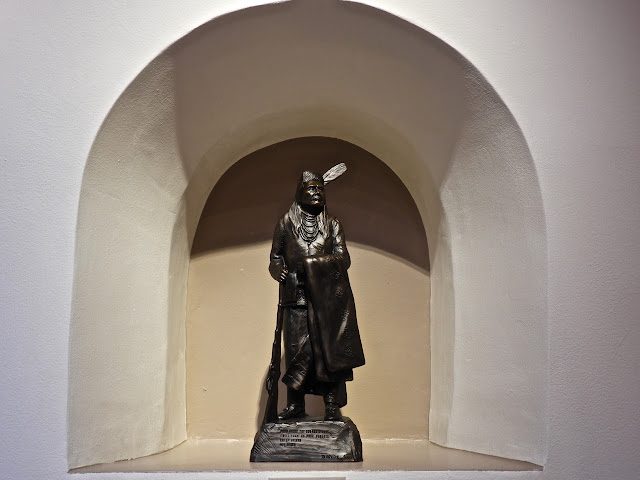 Chief  Joseph by Doug Hyde was tucked away in his own niche inside a gallery. 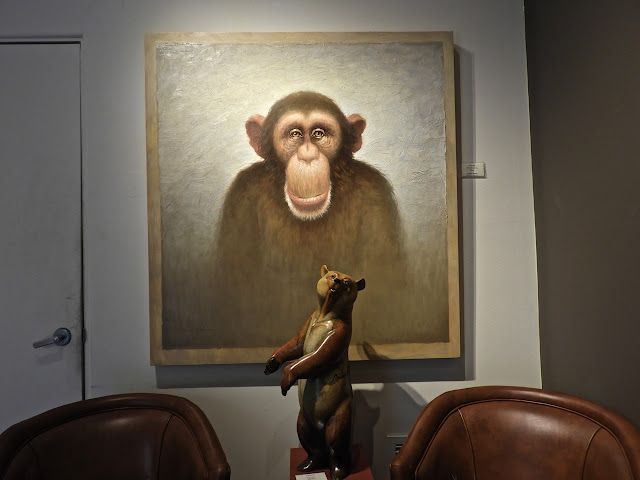 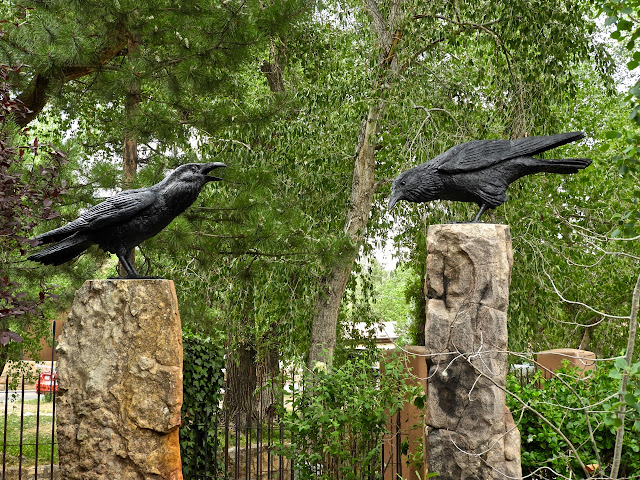 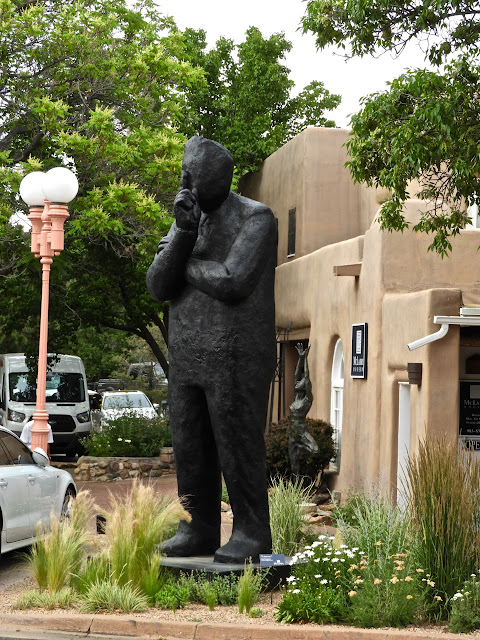 These happy ravens found the perfect perches in the garden of one gallery while the very large gentleman to the left seems perplexed by all that he sees. 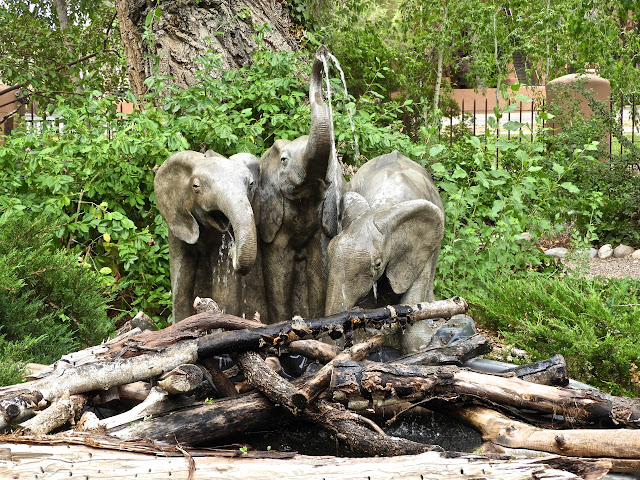 Baby elephants were frolicking at a watering hole. 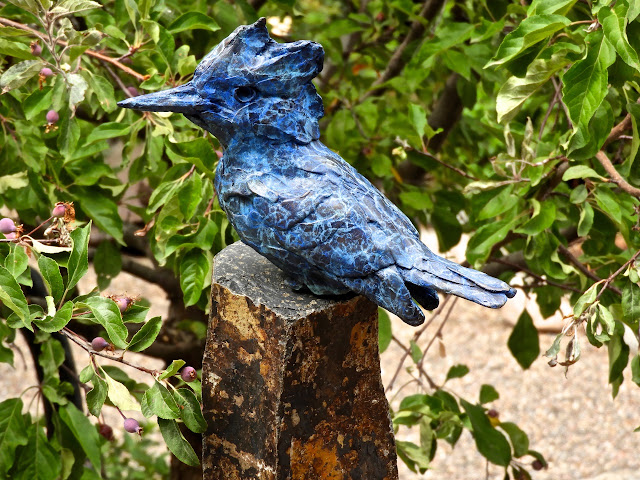 In another location, a pretty blue bird named "Halcyon" by Paul Rhymer was enjoying the attention.

This is just a sample of the wonderful art that can be found in such a short distance along Canyon Road in Santa Fe.  The amount of talent represented in this small area is incredible.
Posted by Sharon at 1:00 AM 8 comments: