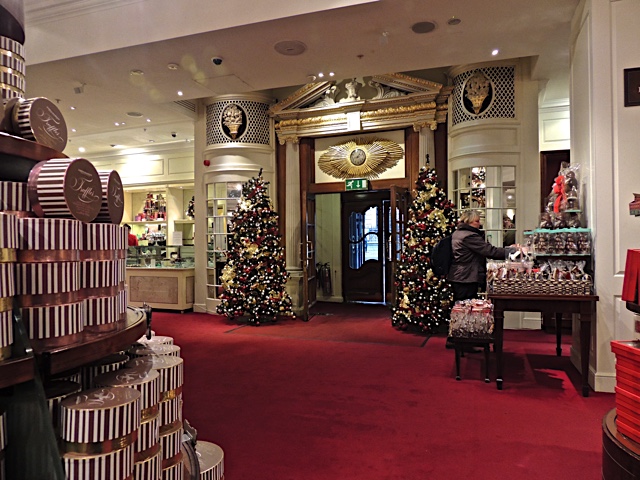 Three years ago when I went to London, I was there in November so I got to experience a lot of festive lighting in the streets and inside the major stores that were decorated for the holidays.  Last year at this time I featured a post about holiday shopping at Harrods.  This year I'm featuring photos from one of my favorite places to shop in London, Fortnum and Mason. 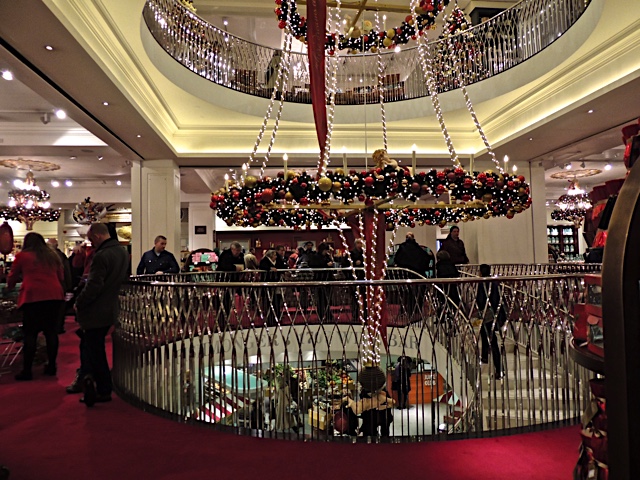 The Fortnum and Mason store is a perfect setting for a lot of festive decorations.  The central, spiral staircase is always decorated with some new and colorful feature.  And that red carpeting throughout the store just seems to say "Merry Christmas". 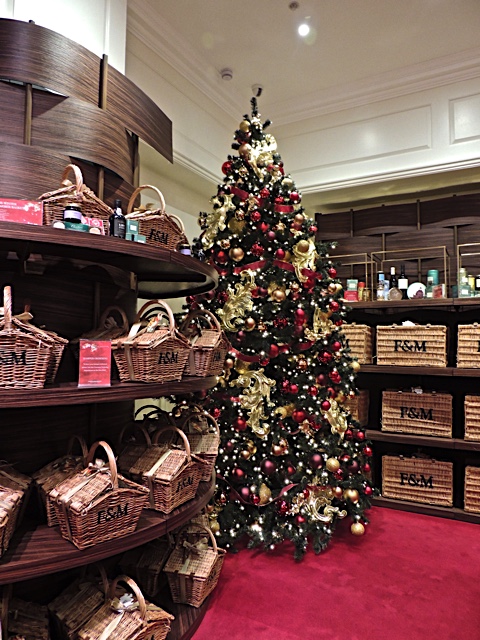 I saw quite a few people ordering up these fun baskets filled with all the special treats that are so popular at this store.  Everything from chocolates, to teas, to jams and biscuits.  You could even order one filled with cheese and pate if you wanted.  And, Fortnum and Mason will deliver it right to your door.  Well, if you live in London they will.

Merry Christmas from Sharon's Sojourns.
Posted by Sharon at 1:00 AM 2 comments: 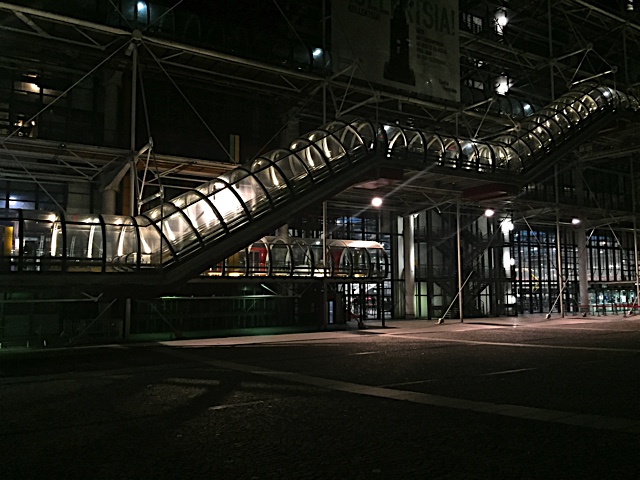 My twenty-four hour visit to Paris might have been short but, my friends and I covered a lot of ground while I was there.  Our evening on the town included a stop at Georges at the top of the Center Georges Pompidou.   I love how you get there through the gerbil-tube-like enclosed escalators on the side of that ultra-modern building. 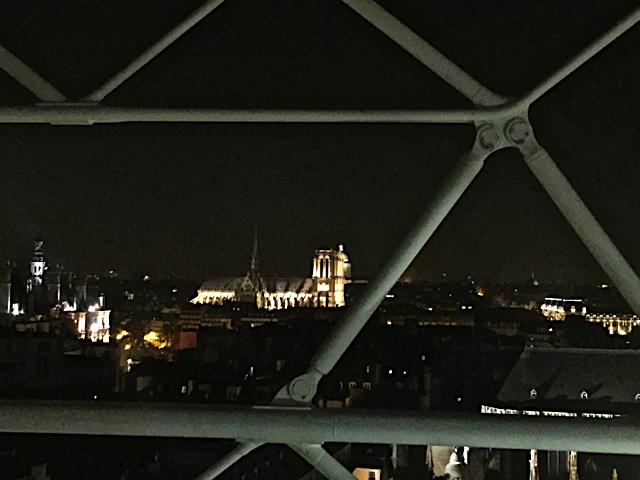 Once at the top, we were seated at a table on the large patio overlooking the city.  We took turns making our way to the edges to snap photos of the of the lights of Paris. 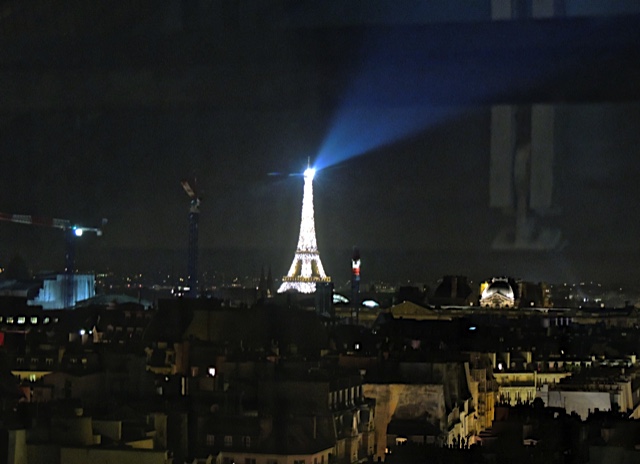 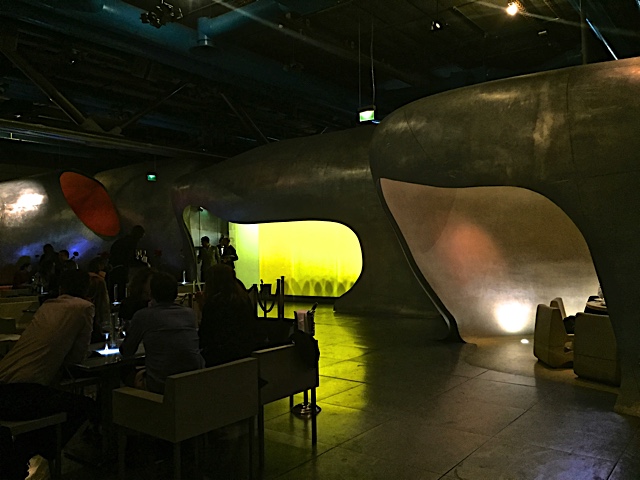 Before we left, we took a tour of the inside dining area with its undulating walls and cave-like rooms.  The space was designed by Dominique Jacob and Brendan McFarlane and it is described as a "designer restaurant with spectacular views". 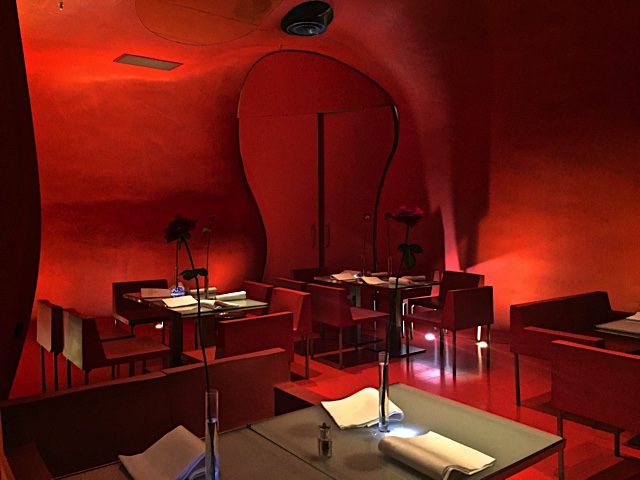 It made me feel like I had walked into an avant-garde art opening from the late 1960's.  I kept waiting for Andy Warhol or Roy Lichtenstein to come walking around the corner or maybe spot James Bond at the bar with a martini....shaken not stirred.

It was a perfect place to end a night on the town in one of the world's most beautiful cities.
Posted by Sharon at 1:00 AM 5 comments:

Embraced by a Rainbow 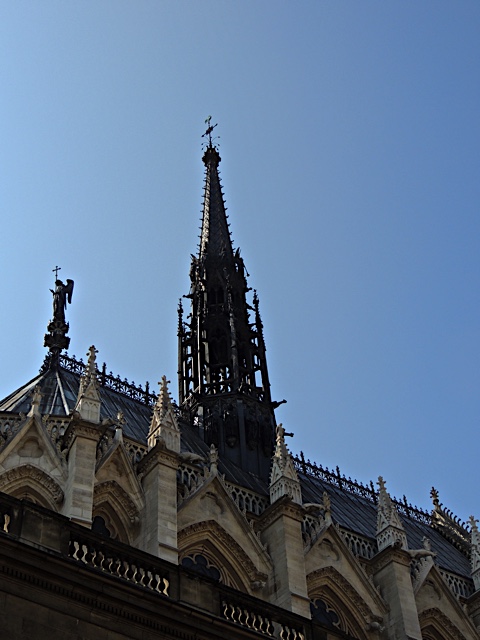 While planning my trip to London back in September, I learned that close friends who live in Chicago were going to be in Paris that first weekend that I was in London.  They suggested that I come over and spend a day with them and I thought it sounded like an excellent idea.  I made the arrangements for a quick twenty-four hours in the City of Light and then started to think about where I'd like to go with such limited time.  The decision turned out to be easier than I first thought.  Ever since visiting Sainte-Chapelle years ago, I've wanted to go back with a better camera so I could capture the magnificent beauty of the place. 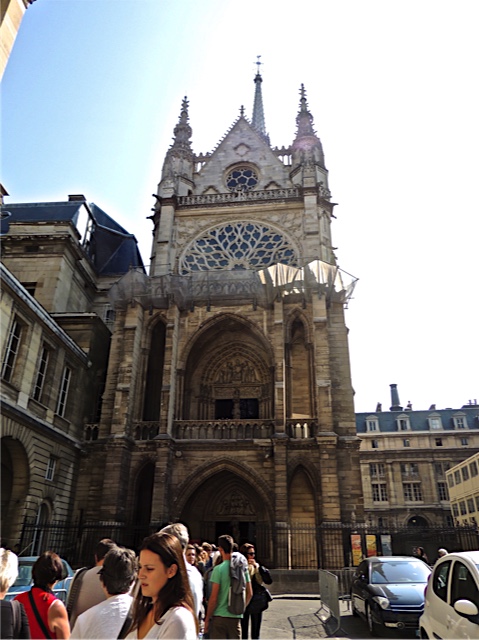 Sainte-Chapelle or Holy Chapel is located within the Palais de Justice complex on the Ile de la Cite in the center of Paris.  I'm sure that many tourists miss this jewel of a place simply because its location is a bit tricky to navigate.  You literally have to enter through the Palais de Justice security checkpoint and you will find yourself in line with a few other tourists but mostly with people there for court appearances or to pay a fine.

Once inside the complex courtyard, the chapel looms as a tall but somewhat nondescript building.  Its rather plain exterior serves as a good disguise for its spectacular interior. 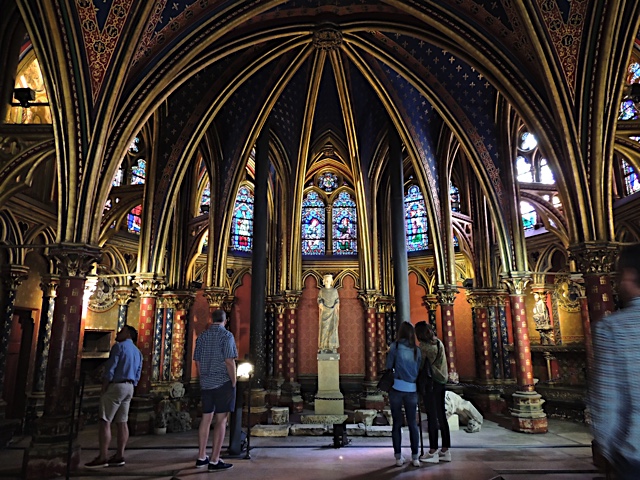 This church was built at the instruction of Louis IX, King of France to house holy relics he had acquired.  The relics included the Crown of Thorns and fragments from the True Cross.  Louis had purchased these items in 1239 from the Byzantine emperor Baldwin II for an exorbitant sum of money, 135,000 livres.  The chapel itself only cost 40,000 livres to build so that should give you a idea of the price he paid.  Construction was completed in 1248. 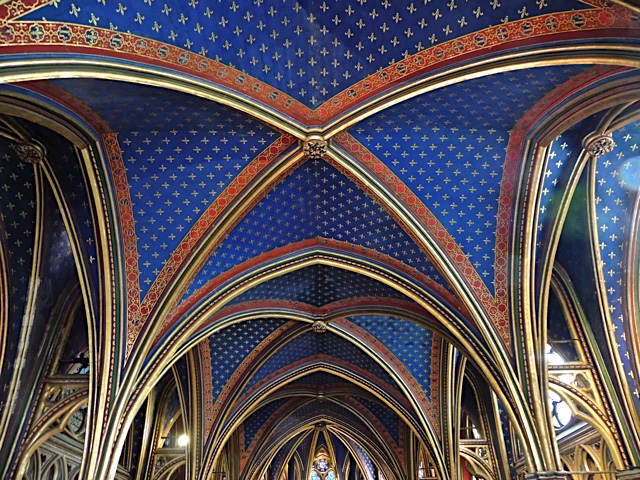 The structure is long and narrow and built in two stories.  The lower chapel served as the palace parish for all the servants and palace workers to use.  The upper chapel was where the relics were displayed at that time and served as the royal chapel for the king and his family.
Visitors enter through the lower chapel which is dedicated to the Virgin Mary.  This chapel has low vaulted ceilings resting on fine columns.  The ceiling is painted to resemble the star-filled heavens. 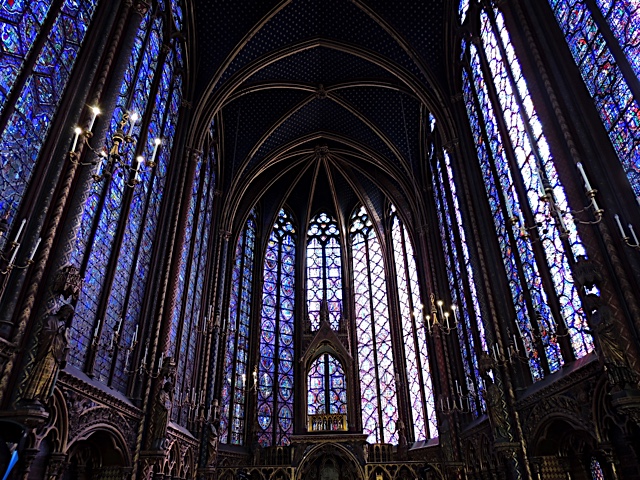 After climbing a narrow, spiral staircase we emerge into the upper chapel.  To me, it's like stepping into a jewel box filled with precious jewels of every color.  The upper chapel is virtually all stained glass.  On a bright, sunny day it's like being embraced by a shimmering rainbow that bathes the interior with brilliant color. 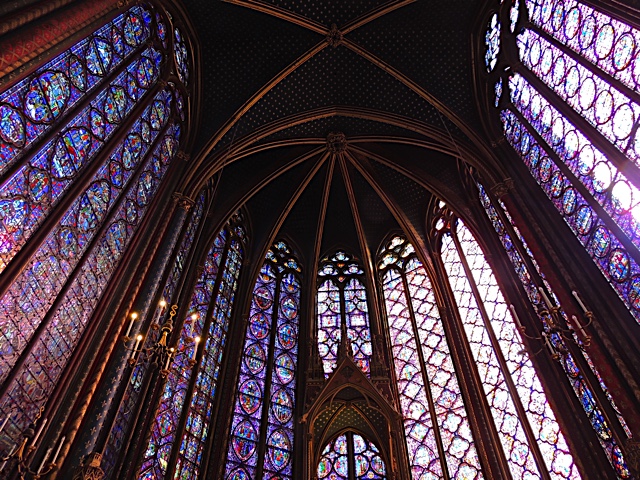 The soaring ceiling is supported by very slender piers above spectacular stained glass windows that make up the walls of the chapel, 6,456 square feet in area.  Each panel soars nearly fifty feet high.  I read a quote somewhere that sums it up brilliantly; "This was a building designed to set the soul soaring and fill the mind with wonder."  And, it's still doing that eight centuries later. 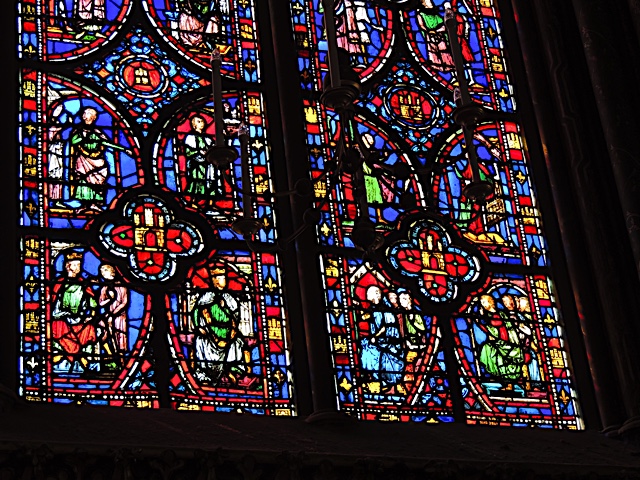 The panels of glass tell the full biblical story of humanity from creation through Genesis, Exodus, Deuteronomy, Isaiah and so on.  Every picture on the windows tells a story and they are in order if you read them up and down.  I think anyone who tries will end up with a permanent crick in his neck from standing an looking upward for so long. 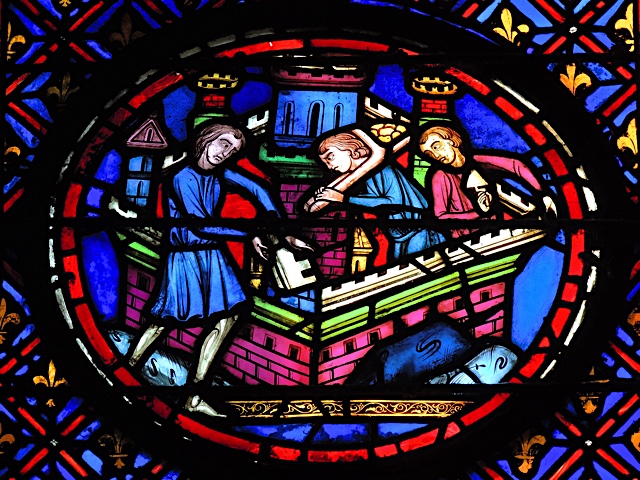 It is truly an amazing site to see and even with all the other wonderful things to see in Paris, I'm glad I returned to this impressive piece of Gothic architecture with its inspiring beauty. 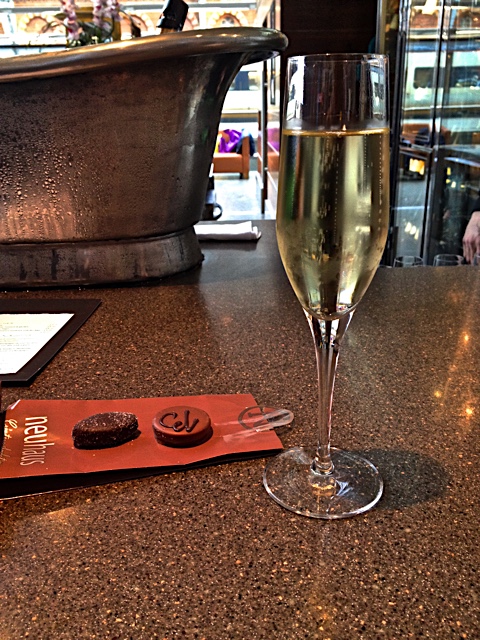 Back in 2013 when I went to London, I paid my first visit to the newly restored St. Pancras Station and I visited the "mile-long" champagne bar that I had heard so much about.  Before I stopped at the bar, I stopped at the Neuhaus Chocolate shop and picked up a couple of tasty chocolates to enjoy with my glass of champagne.

It was a treat that I remembered very well. 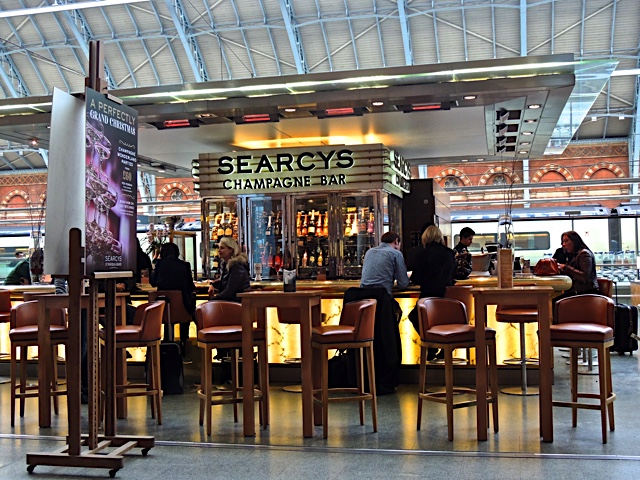 The champagne bar featured a huge selection of champagnes from all over France.  I don't recall which one I selected but I have a clear memory of having quite a lot to choose from. 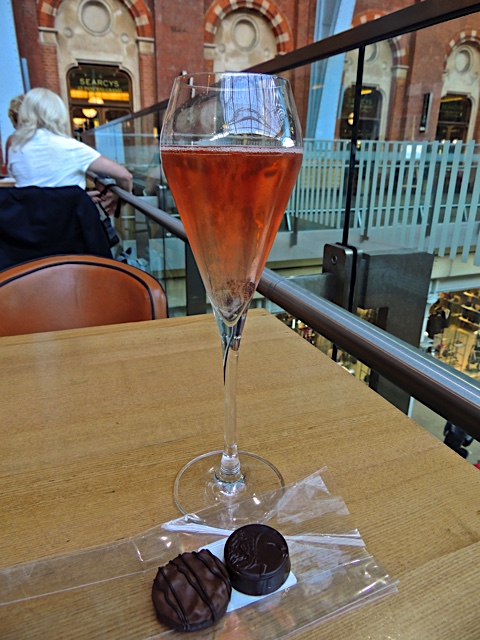 So on this most recent trip to London back in September, I decided to repeat that little event that I enjoyed so much three years ago.

First I tried to find the Neuhaus Chocolate store only to find that it had been replaced by Godiva chocolates.  Oh well, those are pretty good too.

Next I found a little table overlooking the lower level of the station and perused the champagne menu.  Well, that had changed too.  No longer did they offer a huge selection of champagnes.  In fact there seemed to be only two brands available and one of them bore the same name as the bar "Searcy's".  Who knows who the actual vintner was.  I was somewhat disappointed but I ordered a glass anyway. 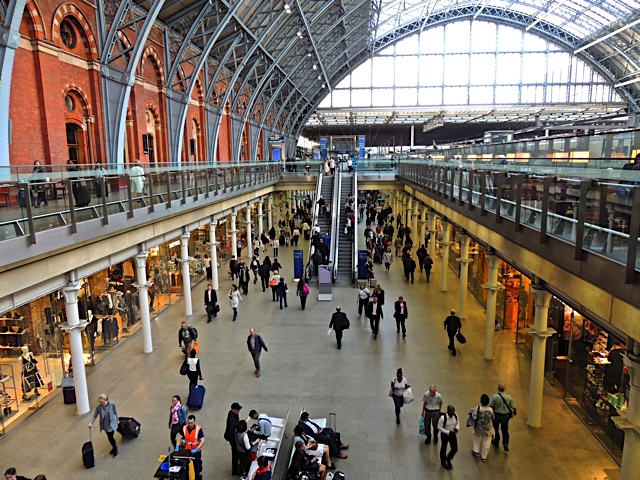 While I sipped my champagne, I did however enjoy sitting there and watching the people below me all headed in various directions and I enjoyed watching the Eurostar trains coming and going behind me.  So the experience wasn't a complete loss.  I may not repeat the glass of champagne experience but, it's certain that I will return to St. Pancras station.  It's a beautiful place with lots of activity and it's the only station where you can catch the Eurostar to Paris or Brussels.
Posted by Sharon at 1:00 AM 5 comments: