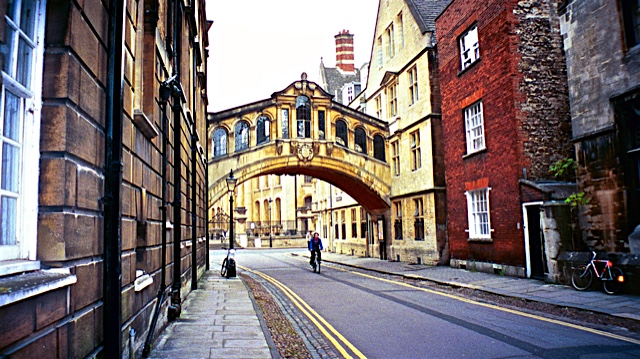 I'm actually in England right at the moment so I'm hoping to get some new photos of some of my favorite places like this spot.
Posted by Sharon at 1:00 AM 4 comments:

Email ThisBlogThis!Share to TwitterShare to FacebookShare to Pinterest
Labels: England

Church with the Longest Name 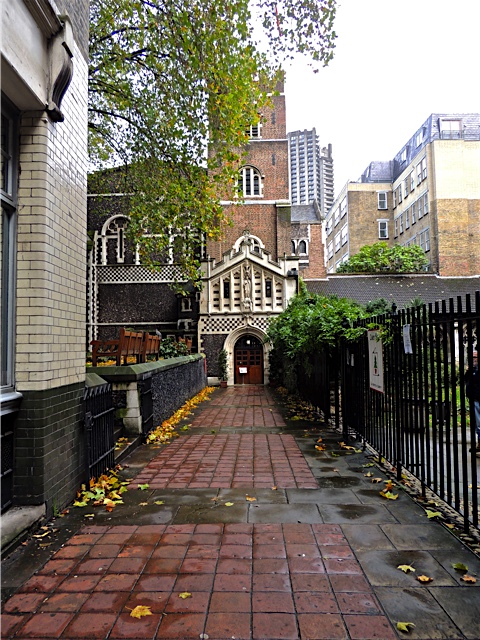 If it hadn't been for Mo of Fresh Eyes on London, I never would have found this wonderful old church.

The Priory Church of St. Bartholomew the Great (how's that for a long name) was established on this site in 1123.  For us Americans, that is a very, very, very long time ago.

Locals tend to call the place Great St. Bart's and given that long name it's clear why. 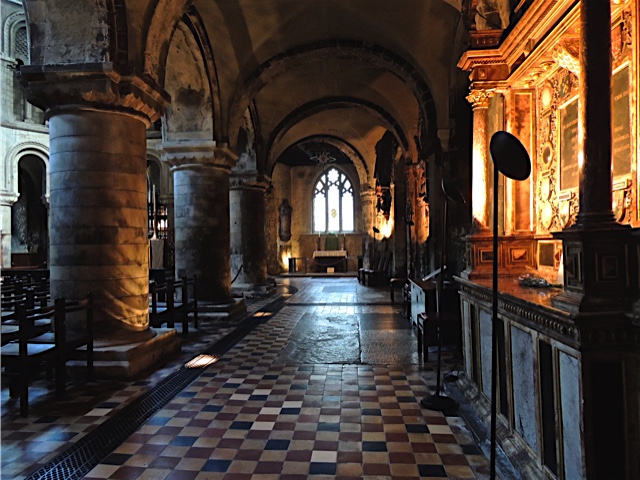 Stepping inside this church is truly a huge leap back in time.  This is a historic church that clearly shows it's age. 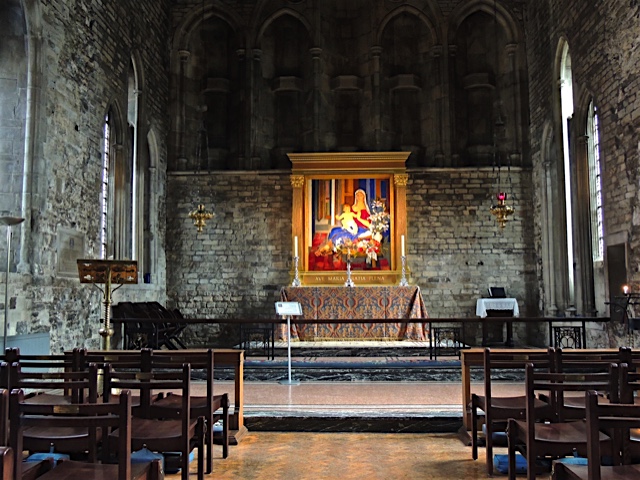 Parts of the church were destroyed in the fourteenth century but other areas have survived even managing to avoid the fates of the great fire of London in 1666.  However, the church did fall in to disrepair for a while. 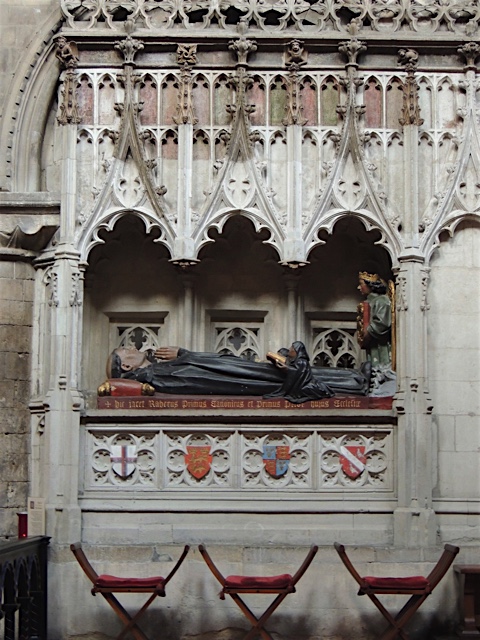 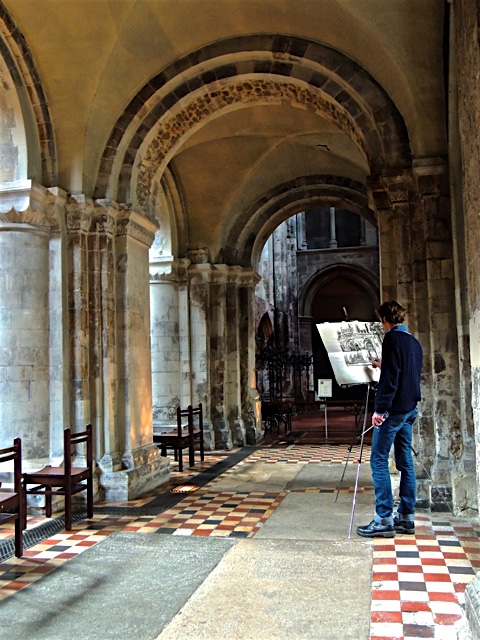 While walking around this ancient church, Mo and I discovered this talented fellow working on a charcoal drawing.  I think this photograph is my favorite of all the photos I took on this visit to London.

This church is truly a hidden gem in the London. 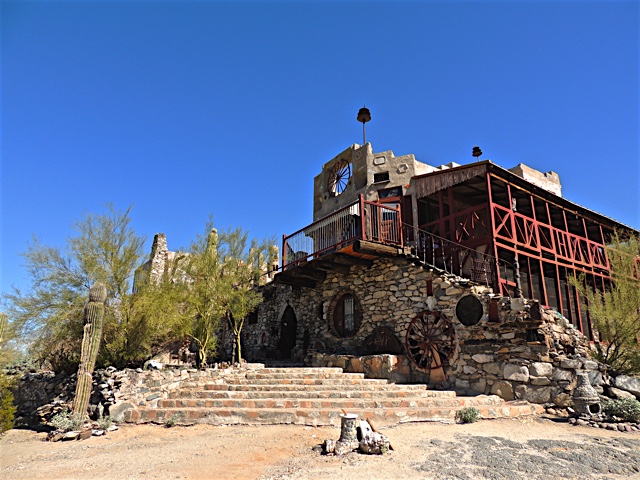 Today's sojourn wasn't very far at all because this unusual place is located right here in my home town of Phoenix Arizona.  I'm talking about Mystery Castle, a place located at the base of south mountain that many Phoenicians don't even know about. 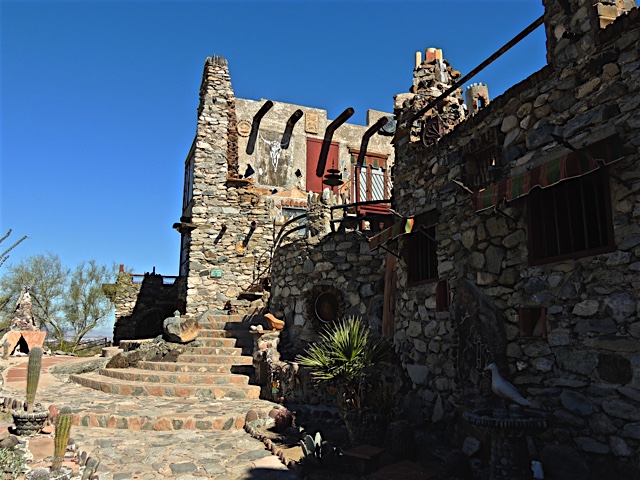 Back in the 1930's, Boyce Luther Gulley of Seattle Washington learned that he had tuberculosis, a diagnosis that changed his life forever.  Rather than whither away in front of his friends and loved ones, he decided to head to a more arid climate and ended up in Phoenix Arizona.  It was here that he started to build a castle for his daughter Mary Lou.  As the story goes, neither Gulley's wife nor his daughter knew where he was so they had no idea that this endeavor was under way in the desert southwest. 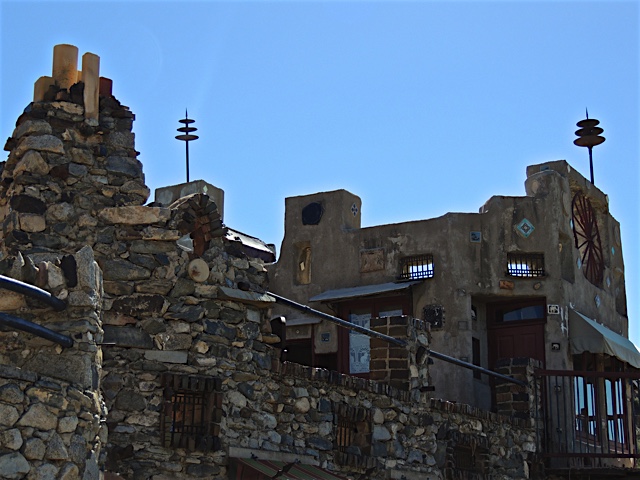 Gulley constructed his castle from found objects and inexpensive materials.  The whole thing is held together with cement, mortar, calcium and goats milk.  It's constructed of stone, adobe, old auto parts and rail tracks and telephone poles. 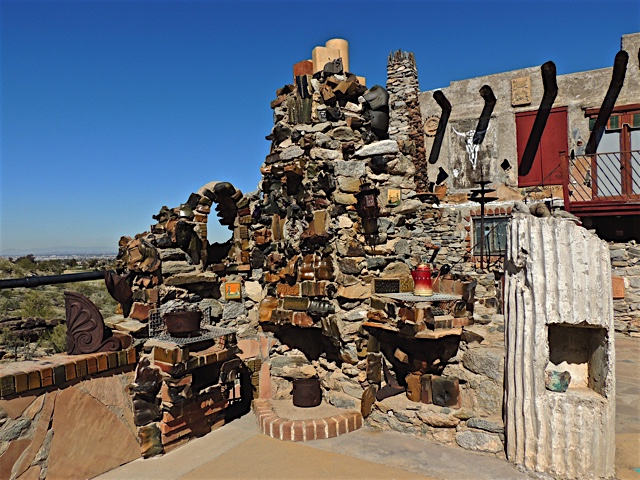 The building is two stories high with several patios and outdoor spaces. 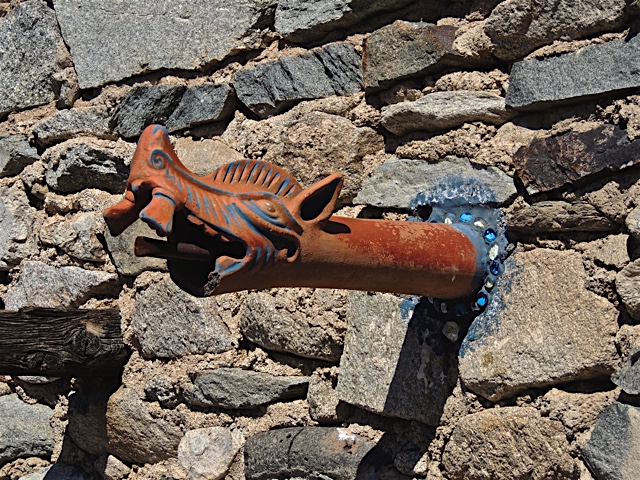 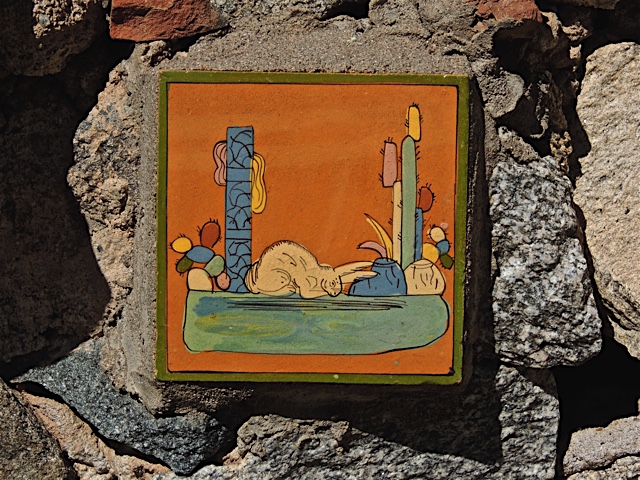 All sorts of odd things can be seen embedded in the walls along with colorful, hand-painted tiles. 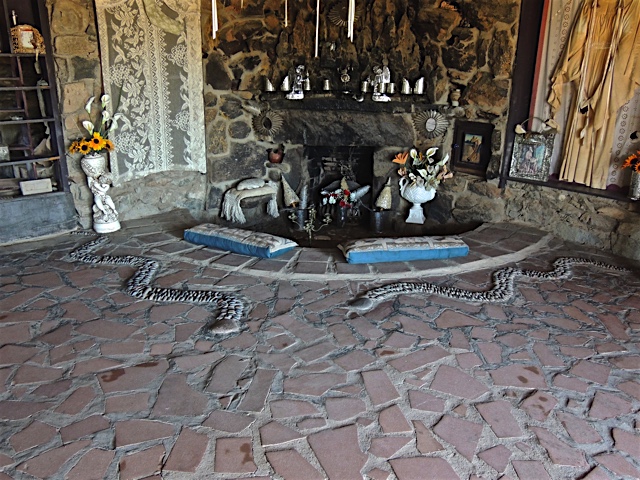 Gulley died in 1945 and Mary Lou and her mother were notified that they had inherited property in Phoenix Arizona.  This was a surprise to them but, they packed up and moved to the their new home. 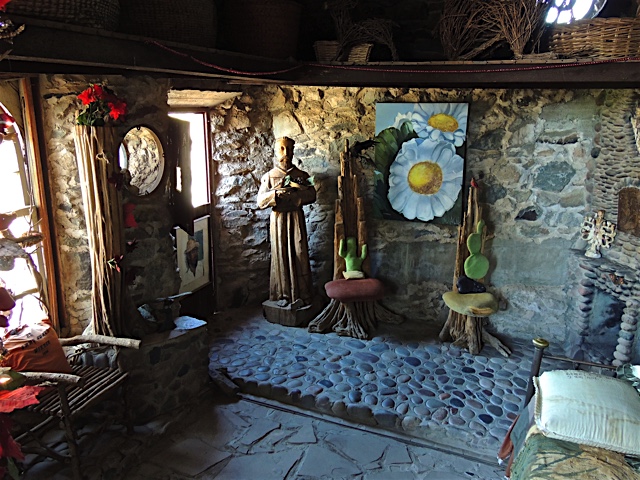 A writer from Life magazine heard about the castle and wrote a story for the magazine about it and the mystery that surrounded it.  That story brought attention to the place and Mary Lou and her mother soon started giving tours of the place in order to make some money.  Mary Lou continued the tours even after her mother passed away. 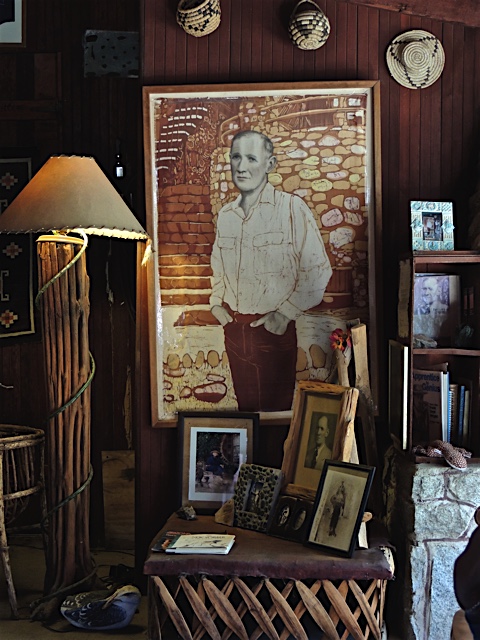 In fact, Mary Lou conducted tours of the place right up to her death in 2010.  The property is now owned and operated by the Mystery Castle Foundation and tours continue to be given but only in the winter months.

To the left is a portrait of Boyce Luther Gulley that is located inside the castle. 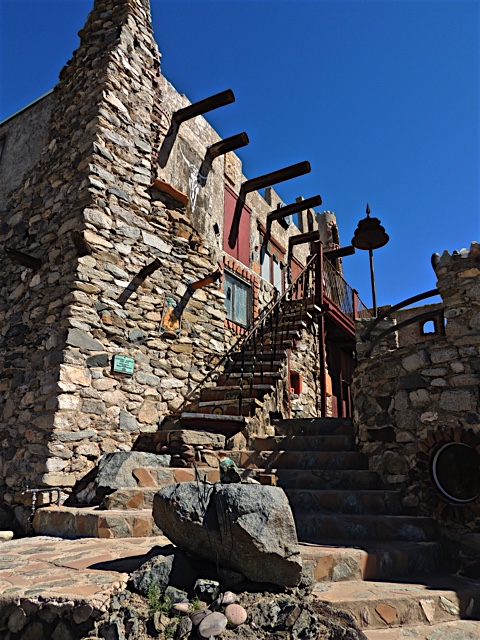 I have to admit, it is an interesting story and a very unique place.
Posted by Sharon at 1:00 AM 5 comments:

The Church of St. Peter 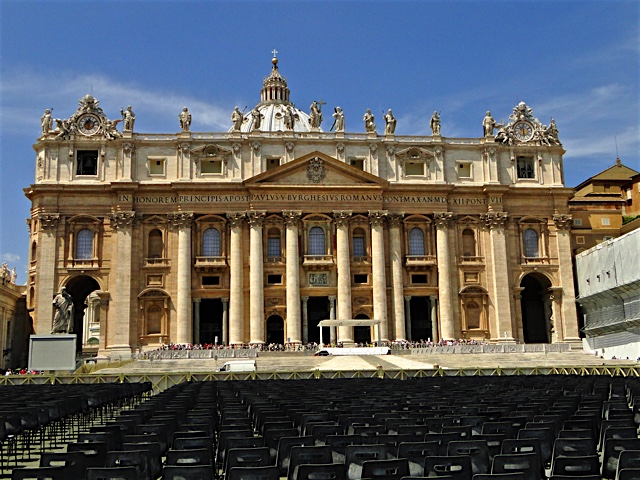 My visit to St. Peter's Basilica was a monumental event in my life after hearing so much about it over the years.  It did not disappoint.  From the time I was a child in grade school I heard the stories of its role in history and I saw the historic photos. 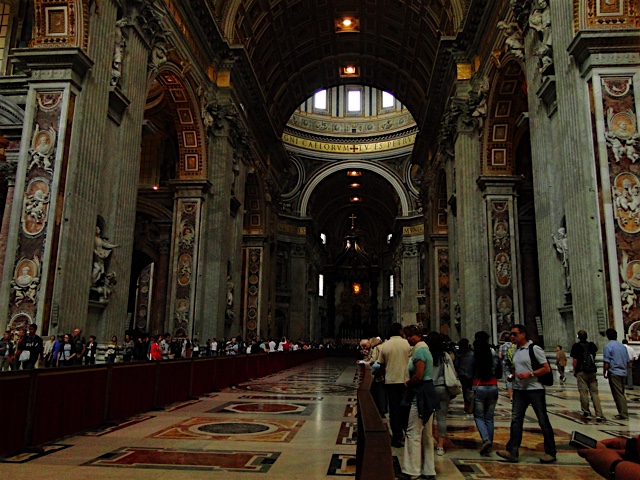 One only has to step through the doors to grasp it's sheer size.  Walking from front to back is much like walking the full length of a very large mall....twice.  Being on a private tour that I arranged in advance allowed my friend and I to skip the long lines and walk right in. 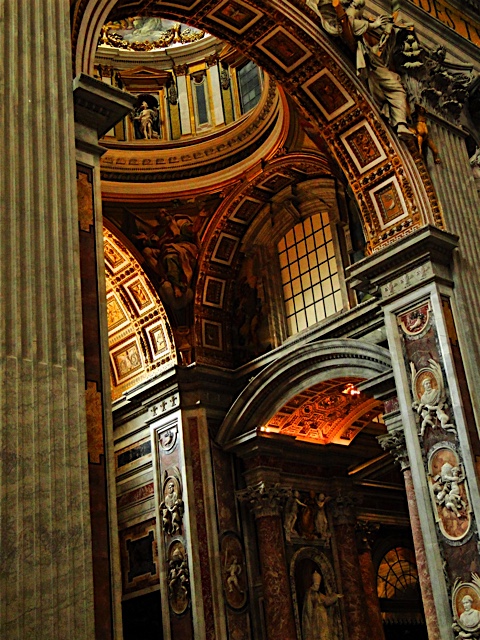 There is so much to see that it can be a bit overwhelming.  While listening to the guide, I found my eyes wandering from statue to statue to every tiny detail of the walls and arches. 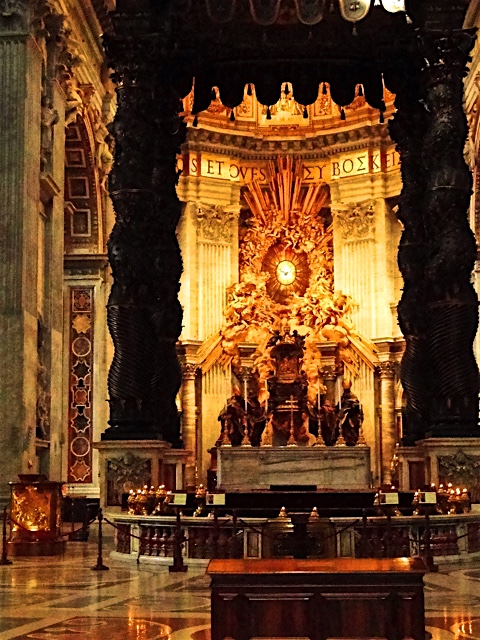 The high altar is a spectacular sight with all of it's gold trimmings and papal decorations.

I found myself wondering how such an amazing place has existed since 1626.

I also thought about St. Peter's tomb far below my feet. 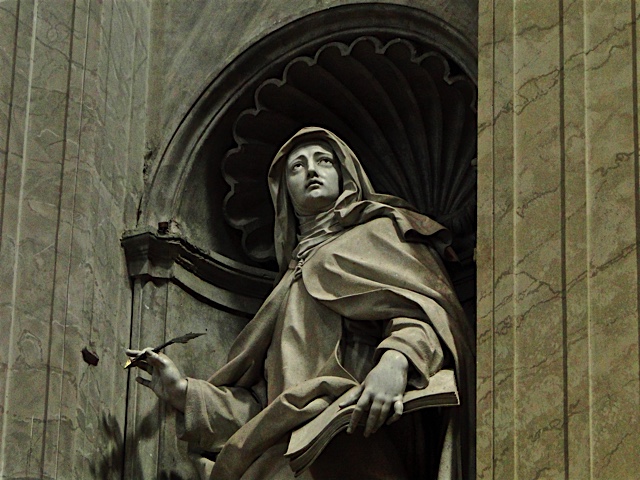 My lens found its way to this beautiful statue of St. Therese by Filippo Della Valle.  Her face was so full of emotion as she appears to have been interrupted from her writings. 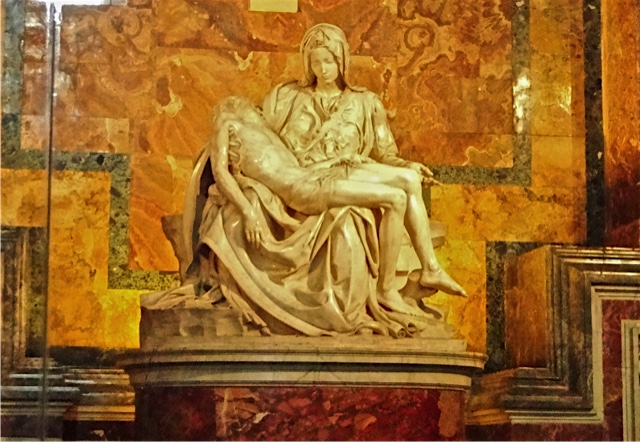 Of course, the most popular statue in the basilica is Michelangelo's Pieta which now is viewed behind bulletproof glass after a vicious attack with a hammer back in 1972.  How anyone could want to destroy such a beautiful piece of art is beyond my ability to understand. 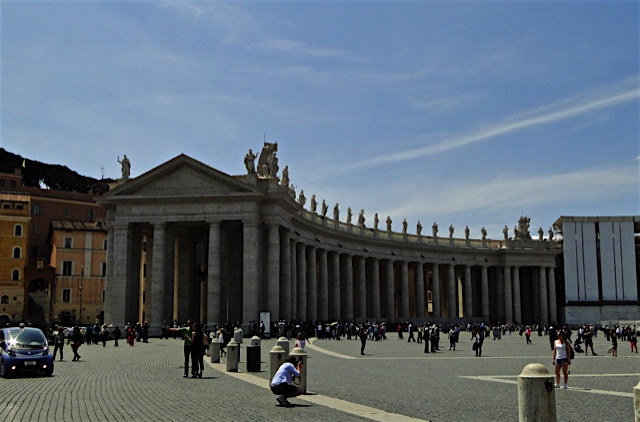 Back on the outside, I took some time to admire Bernini's Colonnade that encircles the basilica. 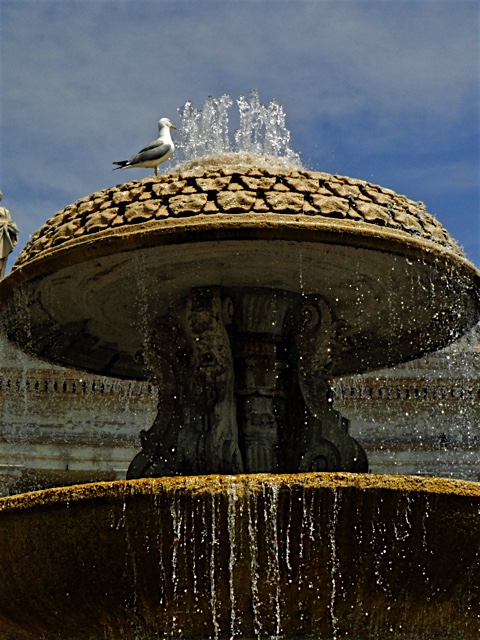 And this seagull and I both admired Malerno's fountain at the center of the piazza.

Visiting this historic place is an experience I won't forget.
Posted by Sharon at 1:00 AM 6 comments: