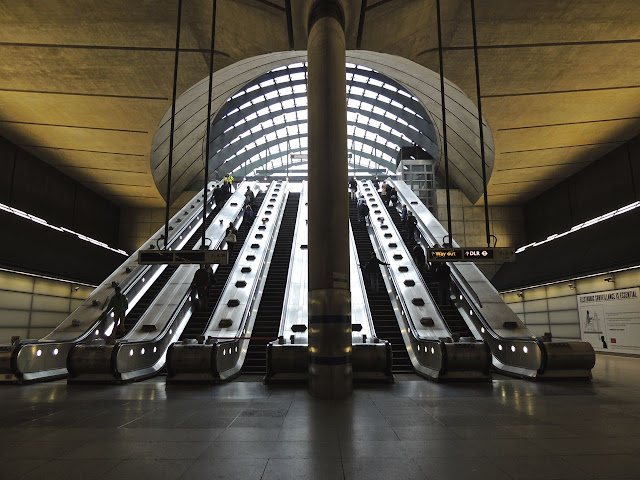 This Sunday I have a few more favorite photos from London.  These all have a bit of an architectural look to them.  Just perfectly symmetrical scenes that caught my eye.  First up the underground station at Canary Wharf. 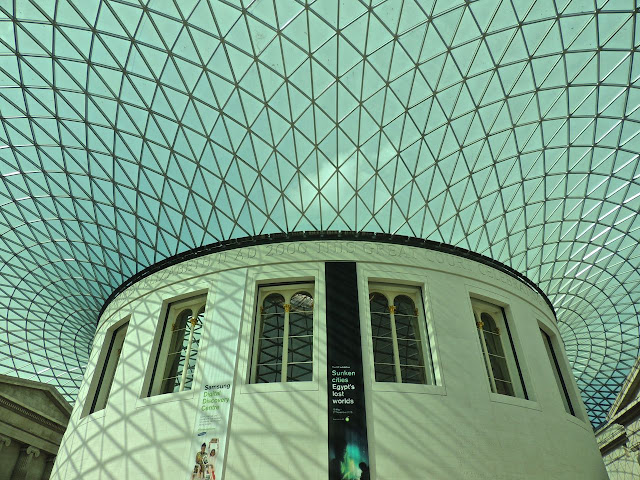 This is from the center courtyard of the British Museum.  That glass ceiling is breathtaking when you first enter the museum. 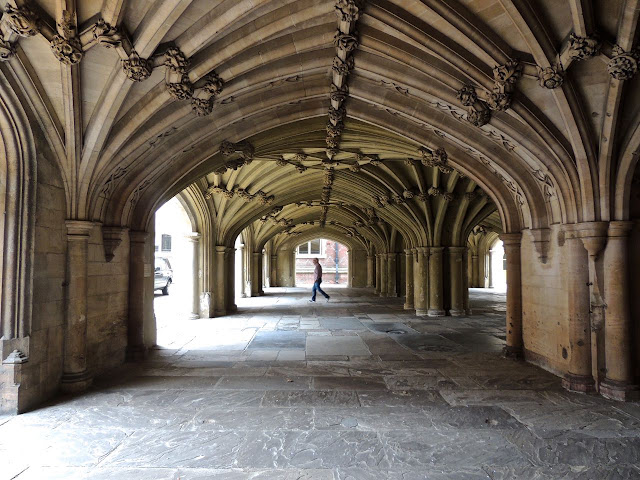 This one is the Undercroft below Lincoln's Inn Chapel in an area of London where you will find most of the legal offices residing.  I've seen this space used a number of times in movies and television shows. 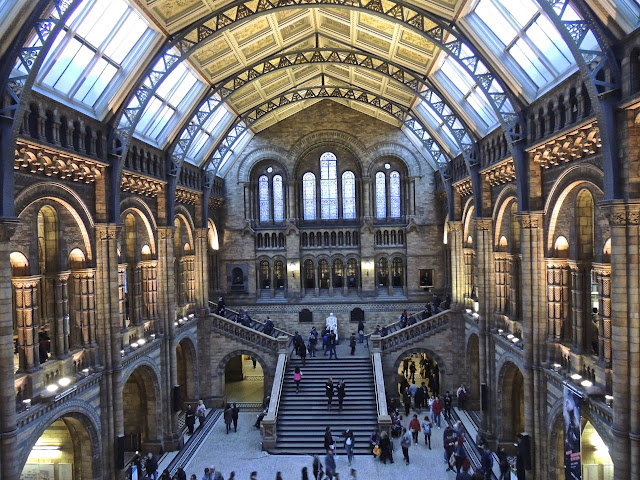 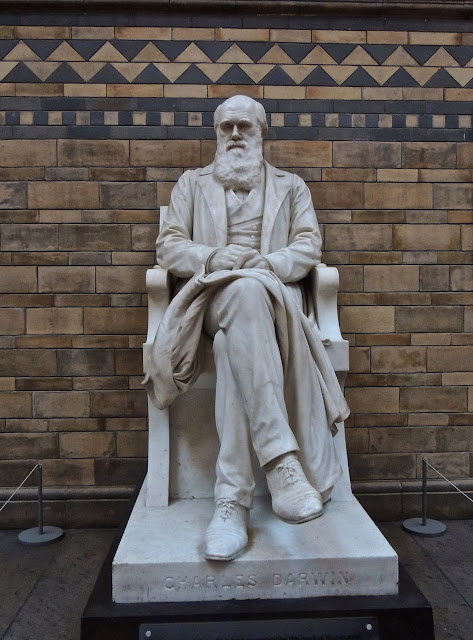 Above is the Great Hall of the Natural History Museum.  The hall is guarded over by Charles Darwin seated in his place of honor. 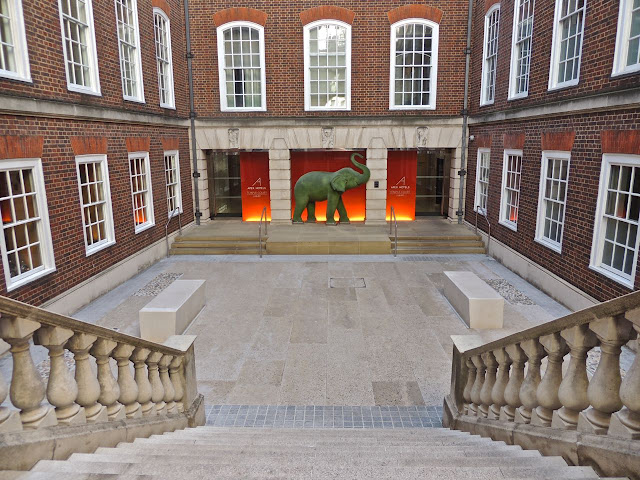 Above is the very striking entrance to the Apex Hotel on Fleet Street.  I remember when I spotted this entrance.  It stopped me in my tracks. 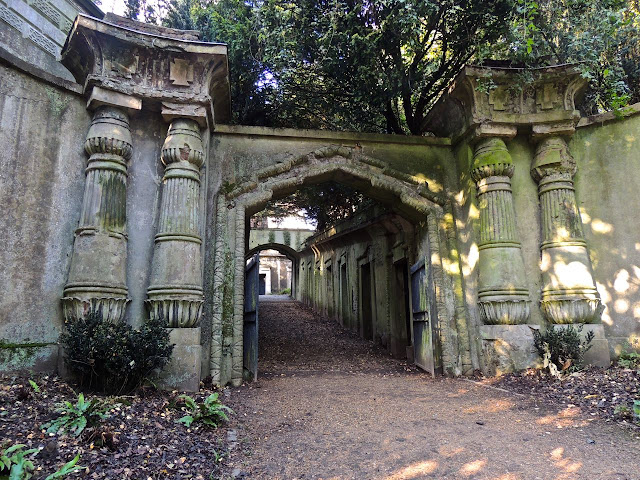 I'll end this group of photos with one from a cemetery.  This is the entrance to Egyptian Avenue at Highgate Cemetery.  Highgate Cemetery is divided into two halves.  The East side is open to anyone and it's most famous resident is Karl Marx.  The west side may be toured through scheduled tours.  The west side is where you will find this architectural wonder along with a few other amazing sights.
Posted by Sharon at 1:00 AM 5 comments: 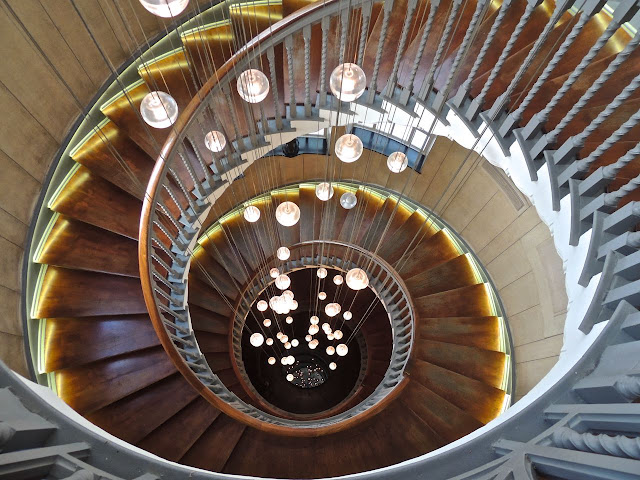 Most of my readers probably already know that my favorite city in the world is London.  I've been there many times and if fate allows, I will visit again.  I thought for today's post I'd show you my favorite London Photos over the years.  This one above is from my 2016 trip.  It's of a famous staircase called the Cecil Brewer staircase and it's located inside a store called Heal's.  I saw a photo of this on Flickr one day several years ago and put it on my list of must-see places. 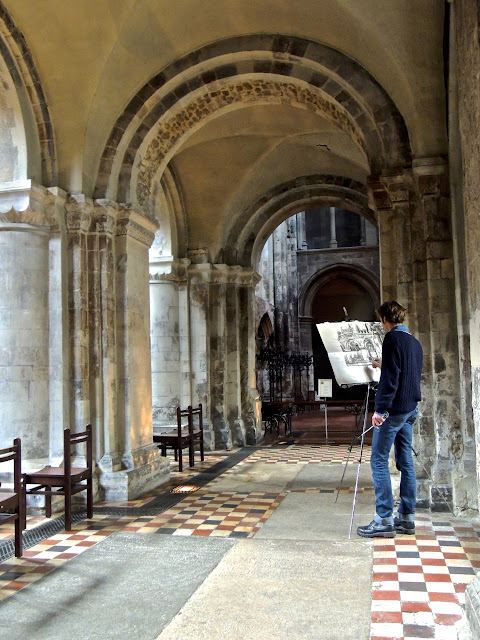 This second photo was taken in 2013 when my friend Mo who lives in London took me to a very special church.  It is called The Priory Church of St. Barholomew-the-Great and it was founded in 1123.

The artist sketching inside the church was an added bonus.  I had this photo printed on canvas and it resides in my living room. 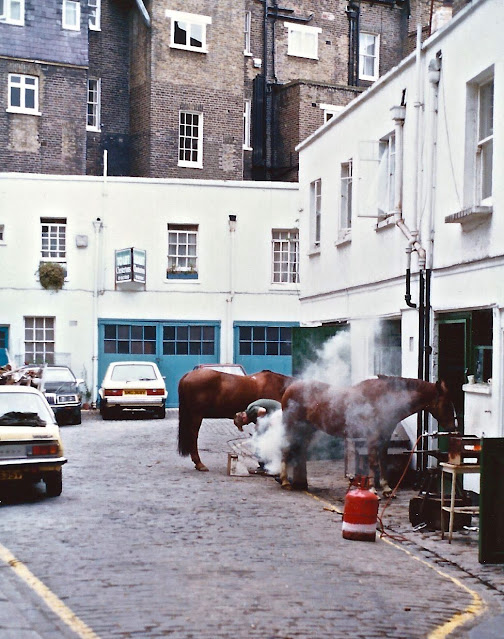 This next photo was taken in 1985 on my very first trip to London.  I was walking along a street when I spotted real live blacksmith shop right in the middle of town. 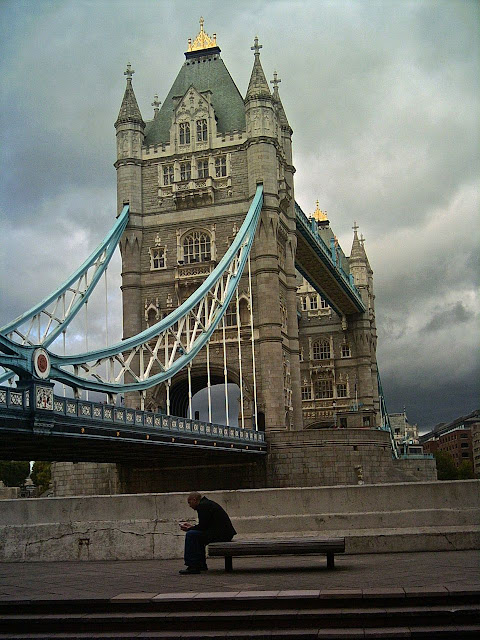 This Tower Bridge Photo was taken in 2005 when I stayed in a flat in an area south of the Thames called Shad Thames.  I remember snapping this photo while I waited for my friends to get coffee at a nearby Starbucks.

A print of this one hangs in my kitchen.

As you might guess, I have many photos that I've taken in London.  Maybe next week I'll show you a few more favorites.

A Few Observations in Chicago 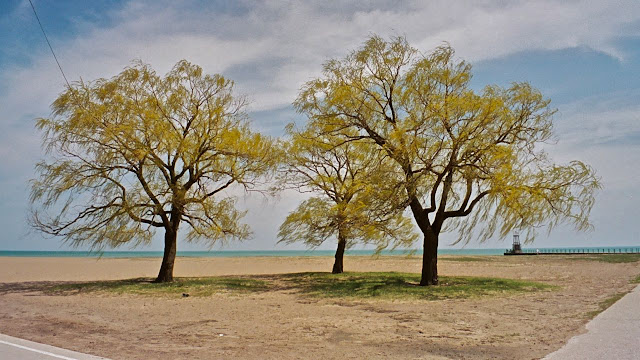 Today I have a few photos taken over the years when visiting Chicago.  Just some observations I've made at various times of year.  Above is a photo taken near Lake Michigan on the very northern edge of the city.  I loved the look of those trees. 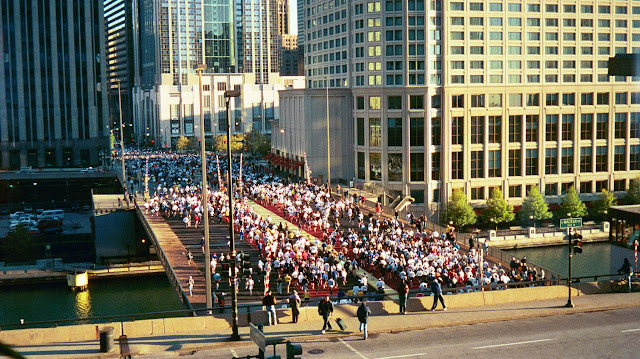 On one trip, I was visiting a friend who was living in the same building I lived in back in the late 90's when I was working in Chicago.  I also happened to be there at the same time as the Chicago marathon.  We could watch the runners right outside her windows. 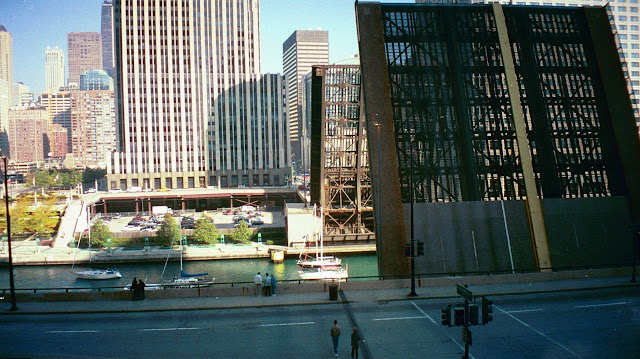 When I was working in Chicago, I had a great view of the Chicago River as it heads out toward the lake.  One thing I used to enjoy was the parade of boats on the river.  One weekend every spring, the boats would head out to the lake for the summer.  In the fall, they would head back in to a dry-dock location for the winter.  I enjoyed watching the bridges being raised to let the tall masts go by. 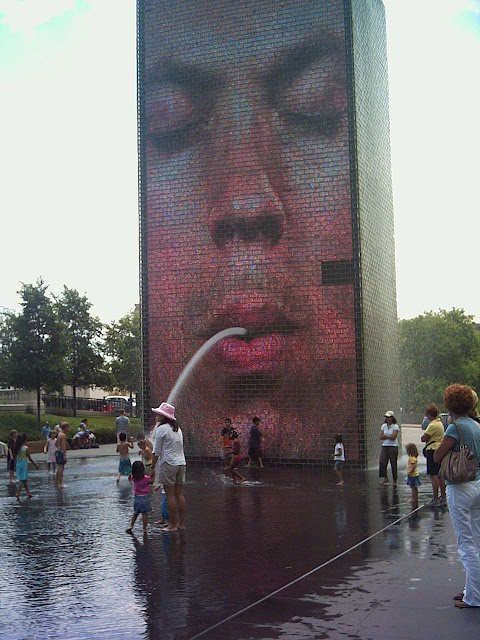 This last shot is of one of the glass brick towers that make up the Crown Fountain at Chicago's Millennium Park.  When I was working in Chicago, this park was just beginning to be developed.  I didn't get to see the finished park until several years later when I visited the city.

This fountain is a work of art by Spanish artist Jaume Plensa.  It's fun to watch the faces changing on the two towers and all the kids playing in the water between them.

A Visit to the New York Times 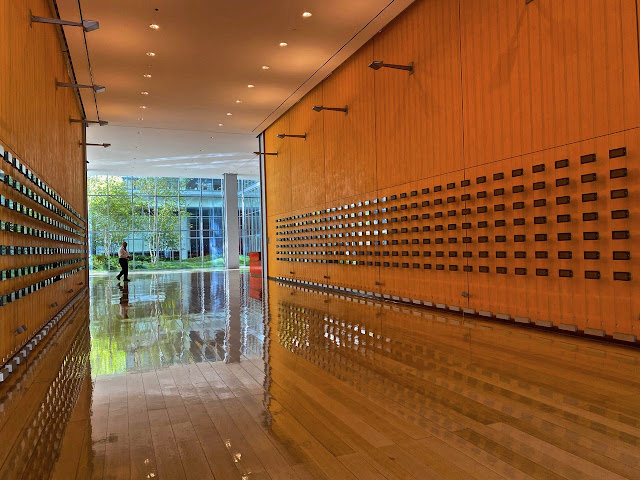 The offices of the New York Times was just around the corner from the hotel where I was staying so one morning I walked over there to have a look.  I had read about the art display located in the lobby called Moveable Type.  The walls are lined with small digital screens that are supposed to contain words and pictures from the archives of the newspaper. There are 40 columns and seven rows of screens. Unfortunately, they weren't working.  I asked three different security guards and got three different stories.  One said they come on every hour another said every 30 minutes and the third didn't know what the timing was or if it was working at all.  I decided to wait around a while to see if they came on but, they didn't. 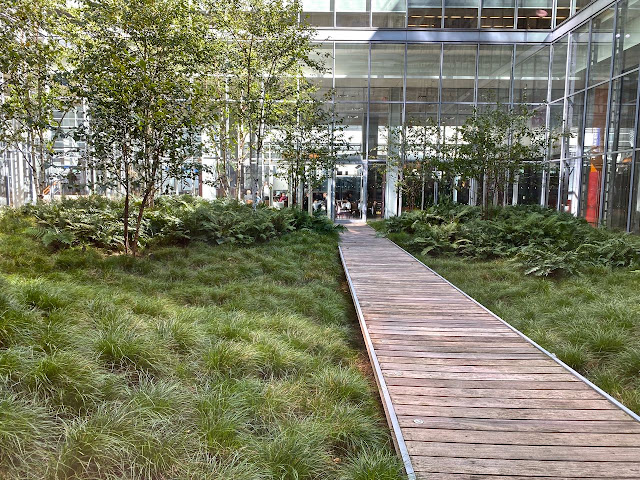 I spent the time waiting exploring the lobby area.  There is a central garden in the lobby that is completely surrounded by glass walls.  If the doors to the garden had not been locked, I would have gone inside for a wander around. 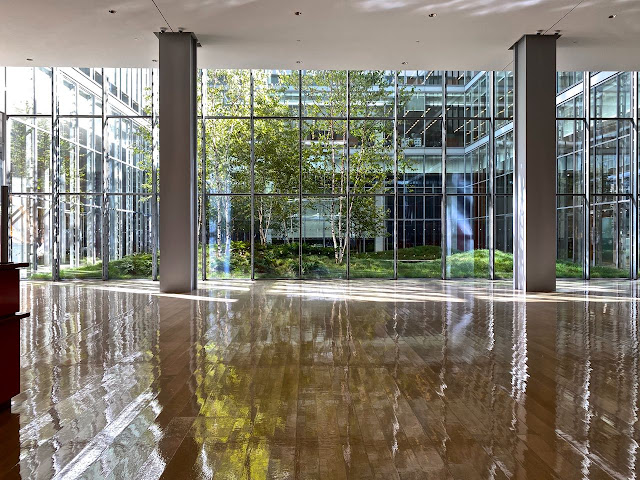 I read that the garden contains seven paper bark birch trees surrounded by ferns and grasses.  It is a beautiful focal point for the lobby area. 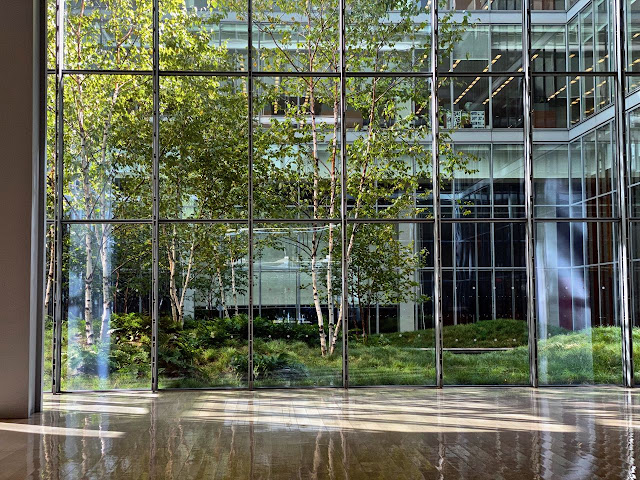 The building was designed by Renzo Piano, a well known and respected Italian architect.  The ground floor also contained a restaurant and small shop.  There was plenty to see while I waited.  I'm glad I visited the building even if the art display was not working.  Now when I read my morning paper, I can picture some of my favorite reporters and columnists strolling through that pretty lobby.