Bandstand on an Island 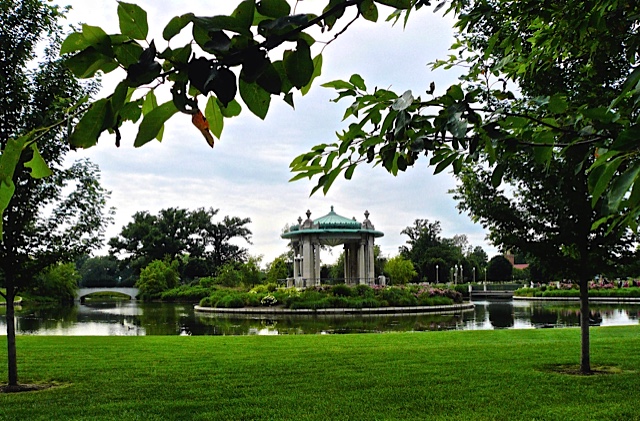 Forest Park is easily one of the biggest treasures in the city of St. Louis Missouri.  At a total of 1,293 acres it is one of the largest parks in the country and is roughly over 500 acres larger than Central Park in New York.  One of my favorite features in the park is the Nathan Frank Bandstand located on an island in Pagoda Lake.

The original structure was a wooden pagoda built in 1876 at the time the park was dedicated.  The original Asian style pagoda fell into disrepair and was declared unsafe in 1911.  Before it could be renovated, it blew over in a storm and was damaged beyond repair.

St. Louis lawyer Nathan Frank donated the funds to build a new structure in a classical Renaissance design made of white marble with bronze railings and ornaments.  Since 1924 it's stood looking elegant and stately in its place of honor on the small island in the lake.

The photo above was taken on a recent trip to St. Louis. 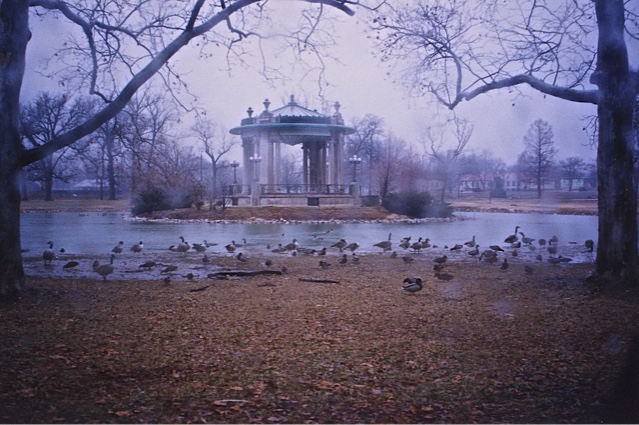 This photo was taken on a very cold and rainy day back in the mid 90's.  I took this photo through the window of the car to give it that misty, watery look.
Posted by Sharon at 1:00 AM

Email ThisBlogThis!Share to TwitterShare to FacebookShare to Pinterest
Labels: Missouri

What a lovely place. It's nice to revisit it after so many years. Love the shot from the past.

I always seem to learn something from your "Sojourn" photos. I'd not heard of this park, but it looks wonderful. Love both of these photos but I think I favor the 2nd because of the moody feel it gives. And all the avian activity, too!

I love both of the shots!

Both photos are wonderful. The one on the bottom has a creepy look and feel to it.

You know more about the history of it than I do. When were you last here? That top picture wasn't taken recently.

I love that second photo.