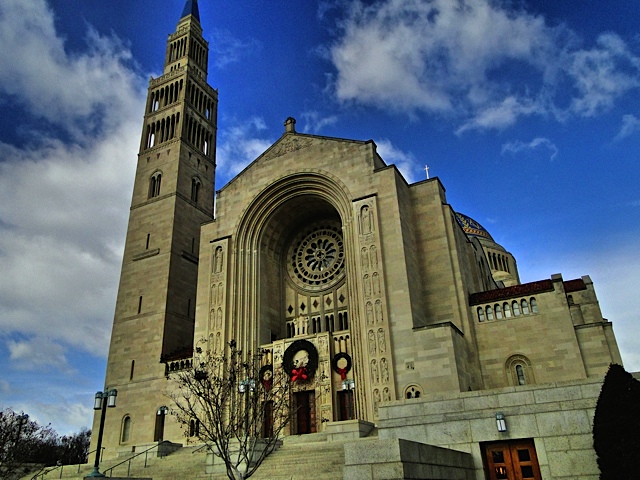 A few years ago I took a trip to Washington DC in December and while there visited the Basilica of the National Shrine of the Immaculate Conception, sometimes referred to as America's Catholic Church.  I had heard that it rivaled all the grand churches of Europe, a fact that I wasn't quite prepared to believe until I saw it for myself.  It is the largest Roman Catholic Church in North America and has been a work in progress since 1920 when its cornerstone was put in place.

The Basilica is a massive Byzantine-Romanesque style structure that surrounds over 70 spectacularly embellished chapels paying tribute to peoples, cultures, and traditions that are the very fabric of our nation. 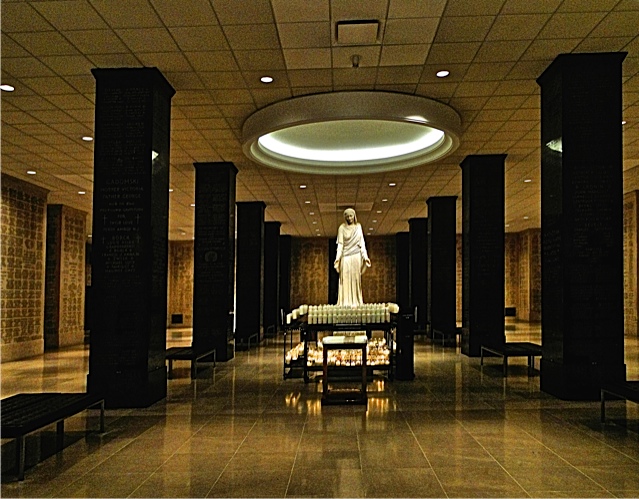 My tour of the church began on the lower or Crypt level.  At its center is Memorial Hall which takes its name from the tablets of Travertine marble and Radio Black American marble inscribed with the names of benefactors and others memorialized here.

In the very center of the hall stands a statue called Mary, Mother of Mankind by sculptor Harry Eversfield Donahue. 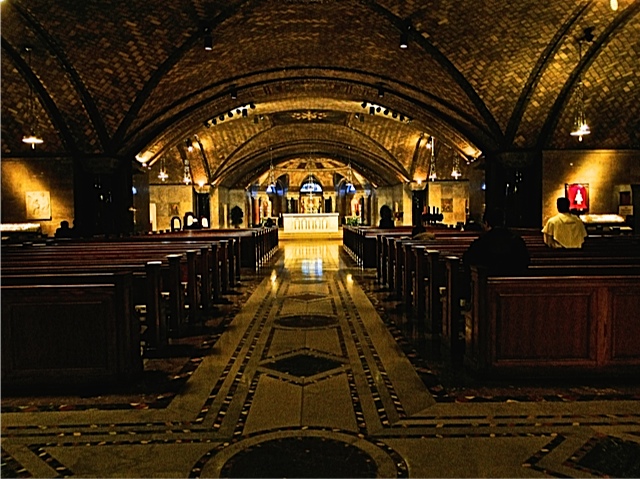 At one end of the lower level lies the Crypt Church, an area that is as large as most modern neighborhood churches.  The vaulted ceiling and the walls are adorned with mosaics.  The photo above doesn't really do it justice, it was stunning in its beauty and detail. 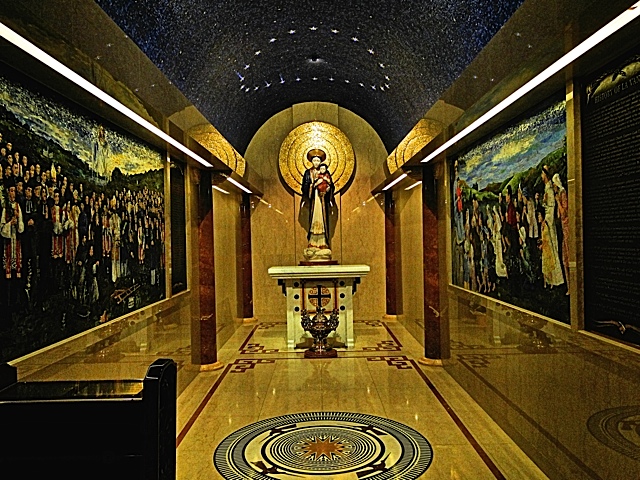 Many of the 70 chapels are located on this level and run along the length of the building on each side of Memorial Hall.

The chapel to the right is called Our Lady of La Vang.  This chapel pays tribute to the Vietnamese region of La Vang where Christians sought refuge during struggles in the 18th Century.

The statue here is a depiction of a vision the people saw when praying while hiding in this region. 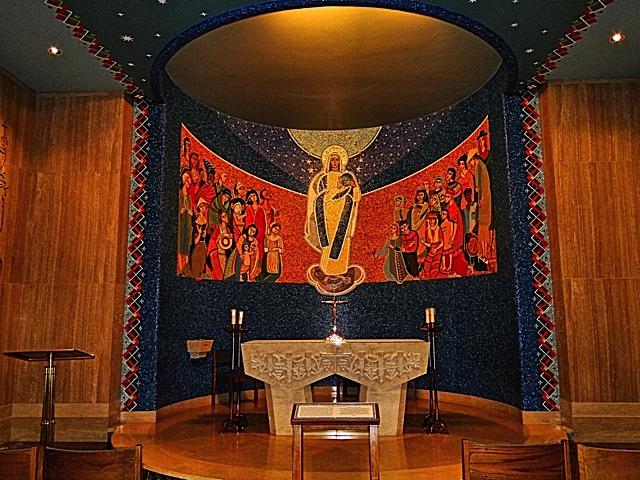 Another chapel on this level is Mary Queen of Missions.  Venetian glass mosaic depicts Mary crowned with 12 stars and holding a globe. 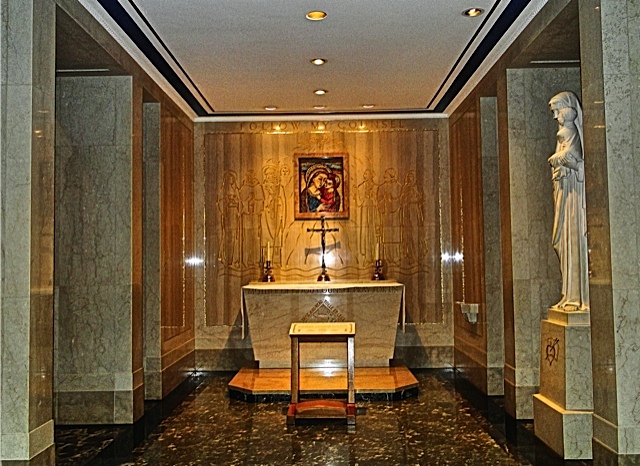 Our Mother of Good Councel chapel  is based on a legend about a small plaster picture of the Madonna and Child that appeared in a church in Genazzano Italy and remained standing without support for years even though most of the church was destroyed during WWII.

Each chapel on this level seemed to out shine the last one and there were far too many to show them all here. 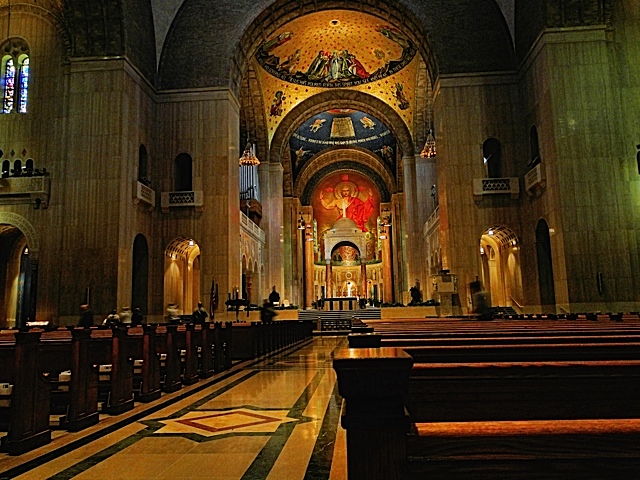 The Basilica on the main level is massive in size and topped with a number of domed covered in glass mosaics. 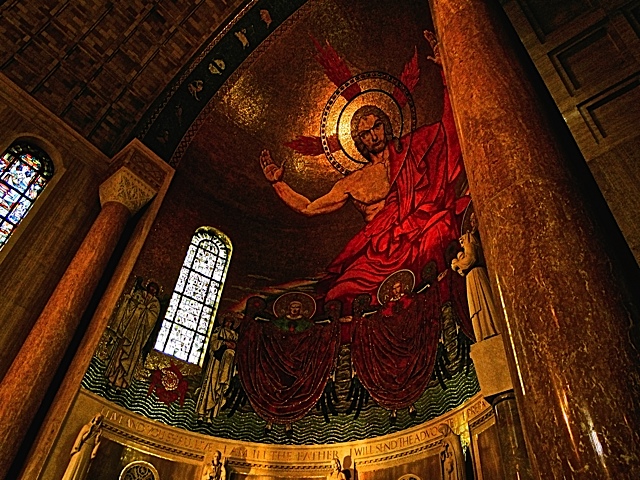 The altar is dominated by a huge mosaic of a fierce looking Christ in Majesty.  At 3,610 square feet it is thought to be the largest mosaic depicting Jesus in the world. 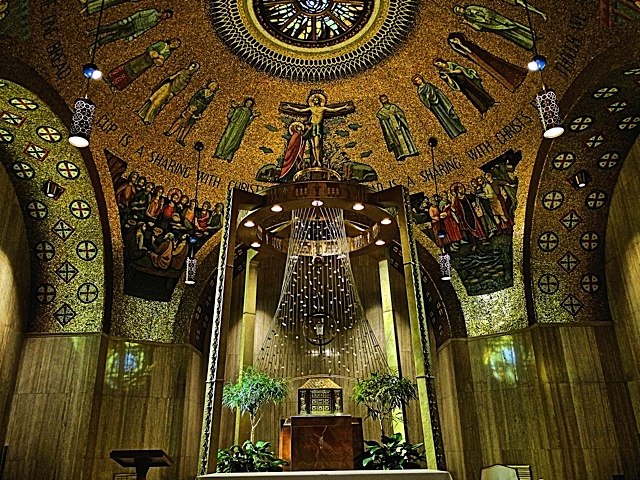 Also on this main level is a chapel that quite literally took my breath away when I entered it.  It is called the Blessed Sacrament Chapel and it features a bronze tabernacle by Xavier Corbero of Barcelona containing the blessed sacrament.  It is evocative of the Ark of the Covenant. 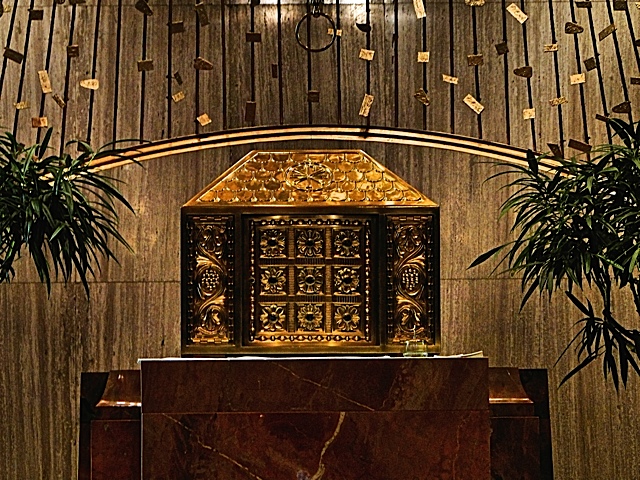 A canopy above the tabernacle depicts Manna falling from the heavens.

There was so much more to see that I'll have to cover this spot again in a future post.  For now, I'll leave you with the stained glass window that was set in the cafeteria inside the church.  Yes, it was so big that a cafeteria inside is an essential amenity. 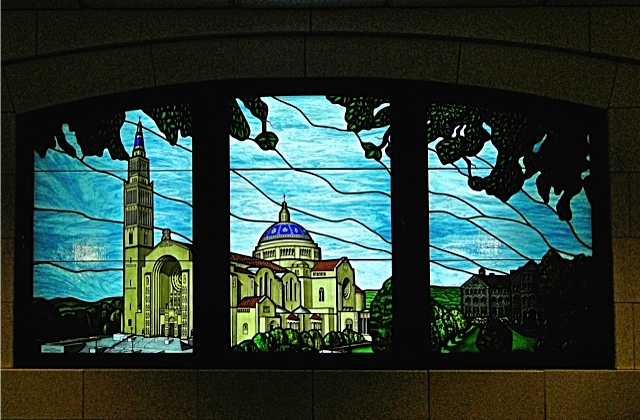 What an amazing looking place, great series of images.

All I can say is wow. That's a magnificent structure and you did it justice with your photos!

Fantastice tour you gave and the photos were excellent as always.

I suspect Pope Francis would decry all the money wasted on this extravaganza. It makes a beautiful museum, though.

Even though your images are fantastic Sharon, I should imagine it would have been such an amazing experience to see all this opulence in realty.. the vaulted ceilings are spectacular.

The artwork and architecture is breathtaking.

Beautiful, Sharon. I have never seen this and did not know that it is so impressive. The photo of the crypt with its arches and spectacular tile floor really grabbed me.

Enjoyed your pics of a place that's nearly in my backyard! I'll have to get back over there and take some pics myself.