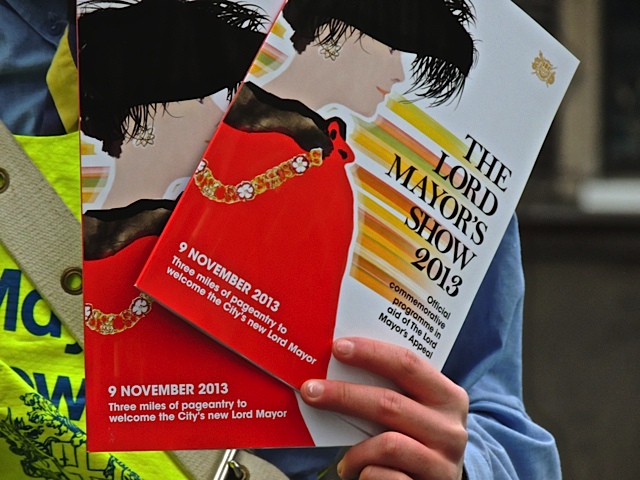 Before I went to London last November, I did some checking to see if there was going to be any events or ceremonies happening while I was there that I might catch a glimpse of.  I found that the Lord Mayor's Show was happening and decided that might be well worth a peek. 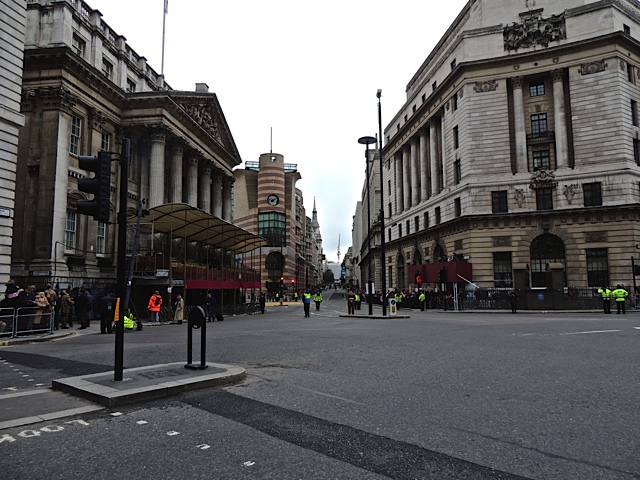 I found what looked like the perfect spot to stand and watch the event.  I had a clear view down the street with the private viewing boxes located just ahead on both sides of the street.  I had a spot right up against the barrier, it was perfect. 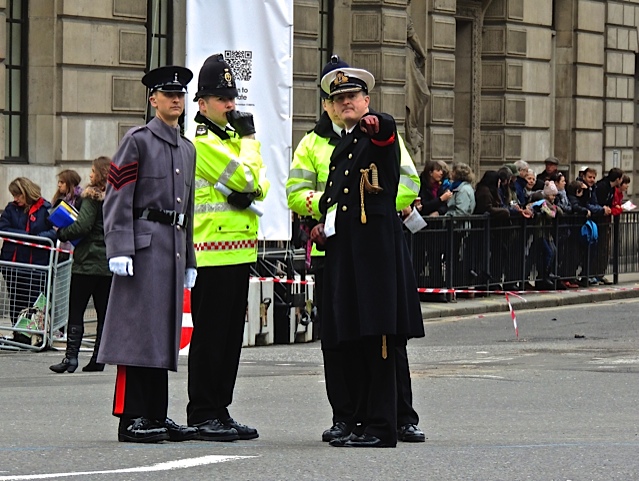 I had arrived about 45 minutes before the event was to begin so I watched all the officials as they prepared the area.  At one point, I thought the gentleman was pointing right at me and I suddenly wondered if I had done something wrong.  But no, he moved on with a smile on his face.  He was probably just commenting on what a perfect location I had to view the parade. 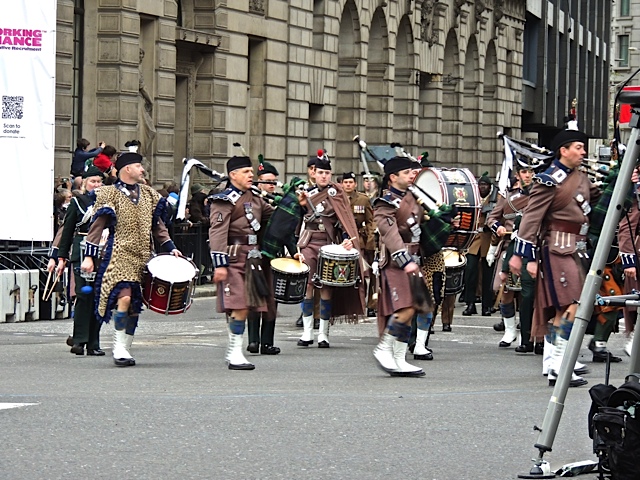 To my right, I watched this military band come marching in and take up residence in a spot right next to where the media where doing some filming of the event.  So now, not only did I have a great spot but, I had the band playing right next to me.  This was going to be great. 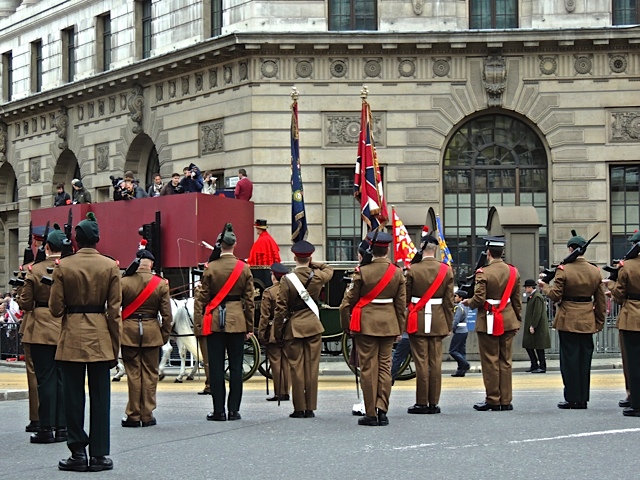 About this time, more military men came marching down the street and with a stomp of their boots and a click of their heels, they stopped and stood at attention right smack-dab in front of me.

Hey guys, your blocking my view! 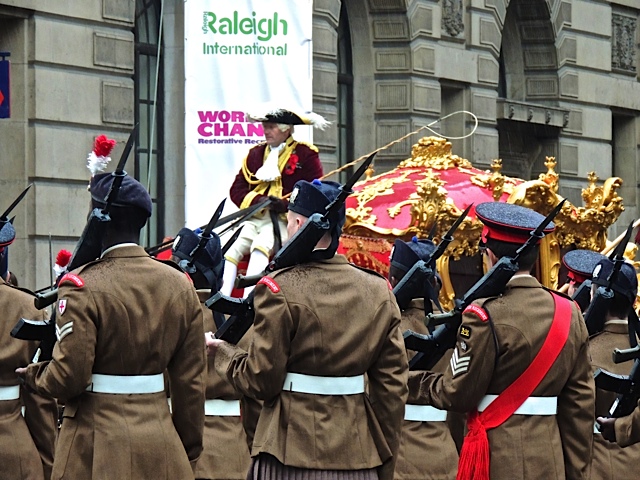 So as the gilded coach came rolling down the street, the only view I had was of the rain soaked hats and backs of these dutiful officers.  This was the Lord Mayor arriving and I could tell it was a gorgeous red and gold coach with a beautifully costumed driver but I could only see the very top. 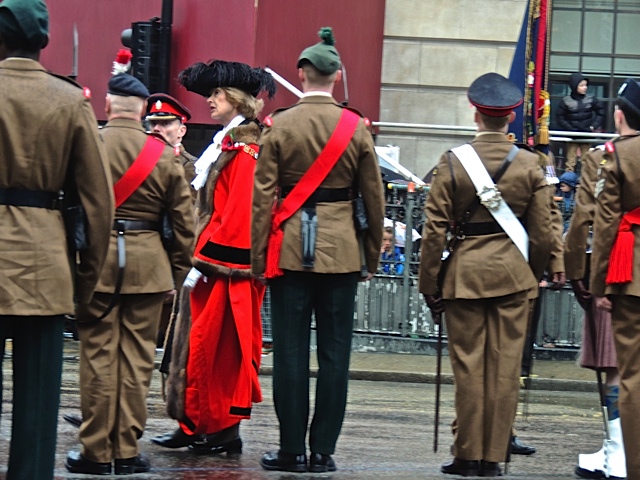 The new Lord Mayor stepped out of the coach and began to inspect the uniformed troops.

As you can see, the rain has started to come down much faster now and I am now struggling with an umbrella in one hand and a camera with the telephoto extended in the other.  Not the best conditions for taking photos, thus this rather blurry shot of the Lord Mayor passing by.

After she finished this inspection, she went up to the viewing stand to the left in the second photo above to watch the rest of the parade. 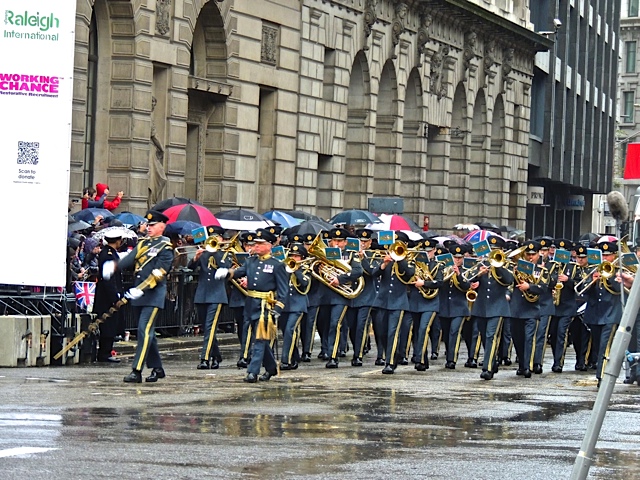 The military men who had been blocking my view, left the scene and the rest of the parade started.  At this point, I was very wet, very cold, and it was raining at a steady pace.  I decided that I wasn't going to get great pictures taking one handed shots, so I ducked into an underground station and left in search of a place to dry off and warm up.

I thoroughly enjoyed seeing this traditional event even though it was through the sleeves of those brown uniforms but, next time I'm taking someone with me to hold the umbrella while I snap the photos. 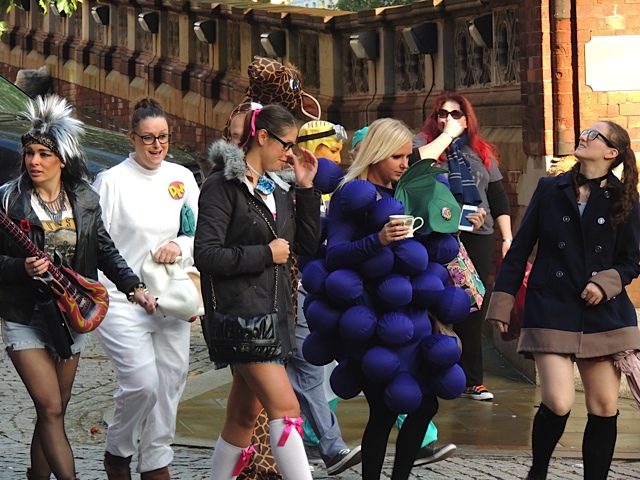 Later that same day, after I had dried off and warmed up, I spotted this group walking down the street.  I can only assume that they must have had some part in the parade that I had missed when I left early.  Apparently I missed the most colorful parts of the parade.

I wonder how that gal in the grape suit sits down.

Fascinating post. That guy pointing at you is a naval officer, I'd guess. The rest of those marchers look quite regimented! :) Well, except for the cute girls with the delightful costumes.

Great job. Thanks for Sharon this! :)

Enjoyed the post. Super photos in spite of the rain.

The bottom shot really caught my attention. What a eye-catching group it is! :-)

Even getting to a spot early doesn't insure a perfect vantage point. You did get some interesting shots though.

Great job of working in the rain, Sharon. I love the pageantry of England.

How fun! You brought back such good souvenirs and congratulations on how you managed to take pictures with an umbrella in one hand!

Oh no, hate when that happens Sharon, and believe me because I'm a shorty it happens a lot! You still got super shots of the day though, this last impromptu one looks like a lot of fun :)