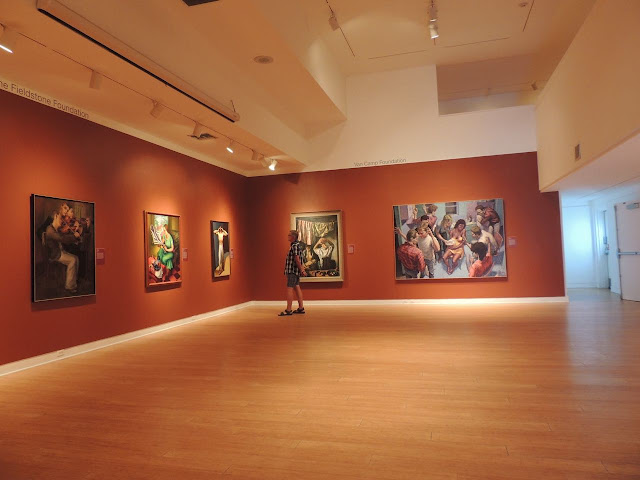 Last week I did a post about the Laguna Beach Art Museum and the wonderful exhibit I saw last year when I was there.  This week I'm following up with a few photos from some past exhibits.  Above is an exhibit from 2014. 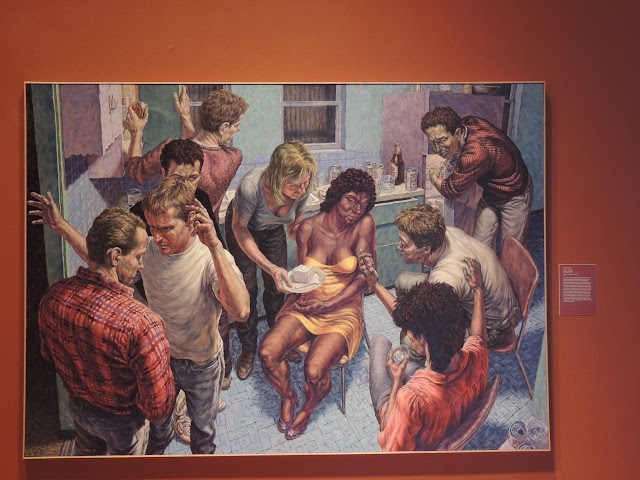 This painting intrigued me because it seemed to tell a story.  It was painted by F Scott Hess and it is called "A Piece of Cake".  It's a scene from a party he attended in L.A. back in the mid-80's when a woman arrived late in the evening with a confusing story to tell.  He painted it mostly from memory of the incident.  If you are interested in the story, click here for a full description. 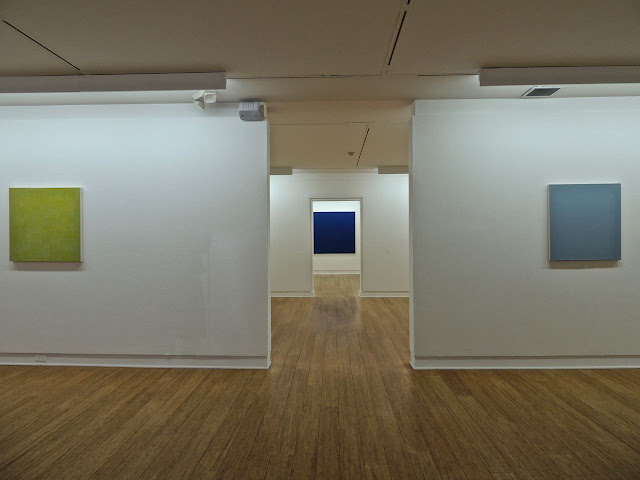 In 2015, the exhibit was stark my comparison to the year before.  It was an exhibit of the work of Marcia Hafif and artist who was searching for ways of painting beyond abstraction.  She directed her attention to pigments and made a series of single colored paintings designed to be exhibited in a way that makes the exhibition itself a work of art.  I can certainly see that working. 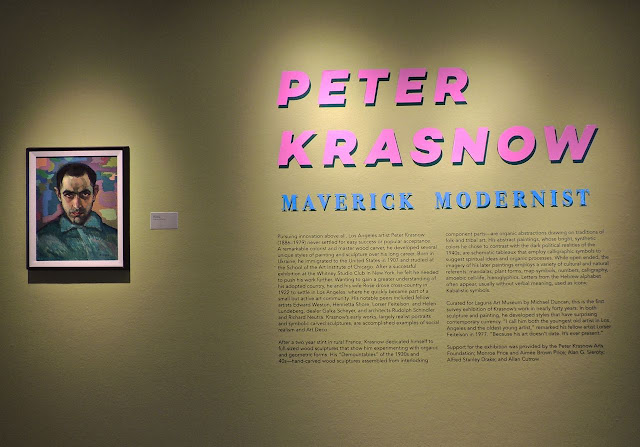 In 2016, I found the exhibit of Peter Krasnow's work to be simply mesmerizing.  The portrait of the artist featured on this title wall was painted by his friend Edward Henry Weston. 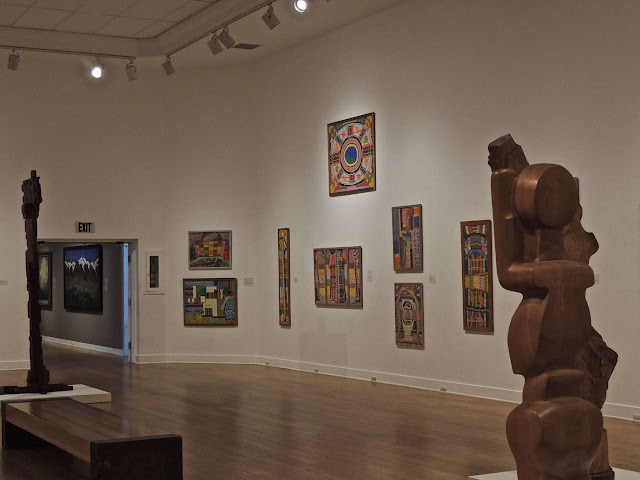 Krasnow was an interesting fellow who shunned the excitement and energy of the art world and because of that he is virtually unknown to most people.  His paintings are full of patterns and colors and his sculptures are almost puzzle-like. 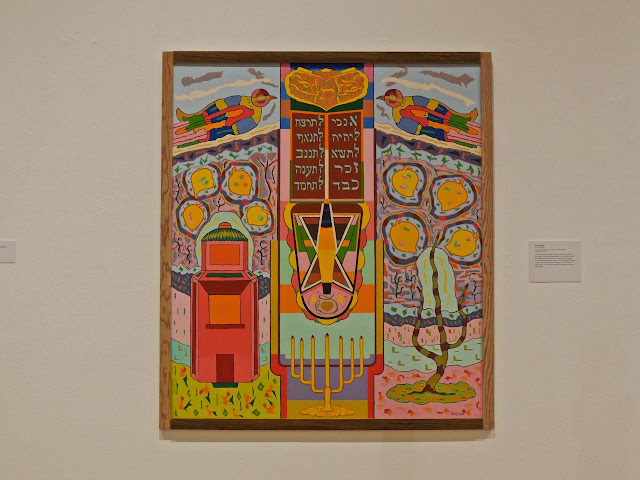 I particulary liked this one  called "The Symbols."  In 2000, Krasnow's estate made a bequest of 147 paintings, 57 sculptures and almost 600 works on paper to the Laguna Beach Art Museum.  The gift included an undisclosed amount of money with instructions to create an exhibit and catalog of the work.  The task was finally accomplished with this superb exhibit. 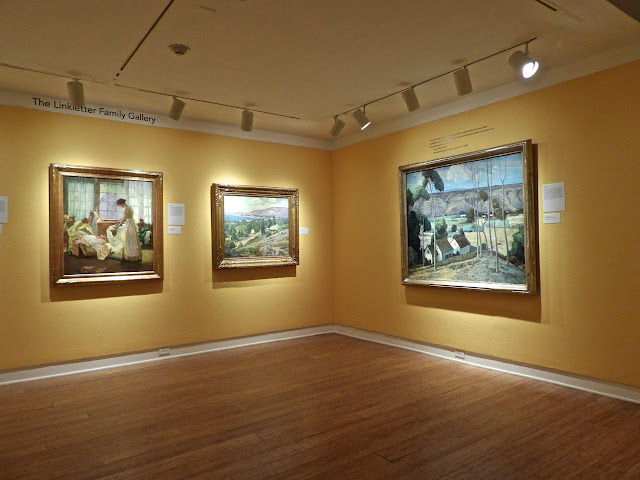 This last group of work was from 2018 when the theme was "Art Colony: The Laguna Beach Art Association 1918 - 1935.  The paintings were by different artist who were members of the ever expanding circle of artists in the area. 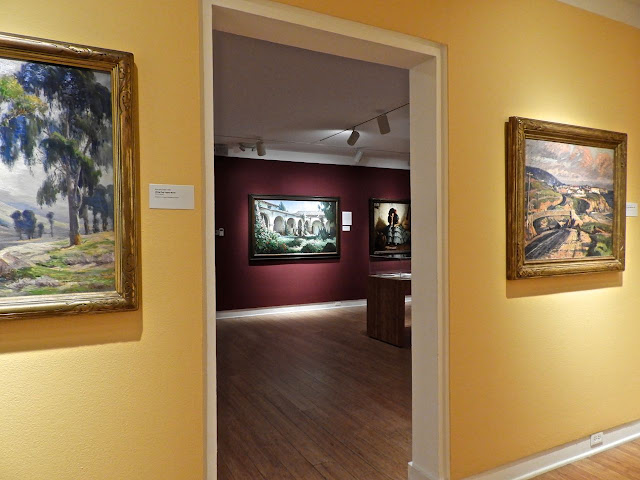 The works were in a variety of styles and subjects but they all display and exceptional amount of talent and skill.  The exhibit filled the museum with beautiful works by artists who began the whole art scene that the small community of Laguna Beach is known for. 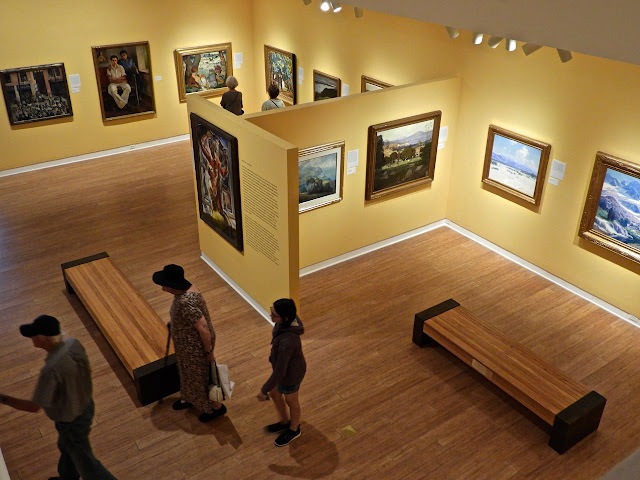 The Laguna Beach Art Museum might be small but I have to say it is masterful at producing exciting and interesting exhibits.  Often they feature artists I had never heard of before but whose work I've found interesting, inspiring and stimulating.

I certainly hope that I'll get to visit there again when life returns to some type of normal routine.
Posted by Sharon at 1:00 AM

Great exhibits and a really beautiful museum. (I only knew of Edward Henry Weston as a photographer.) What diverse and interesting art.

I find that every time I am in an art gallery/museum that I pay attention to the wall colors! These were gorgeous! The walls usually get repainted quite often to showcase the art that is going to be hung. What a great job that would be to choose the backdrop colors! When I lived in Colorado, the Denver Art Museum was a great inspiration for paint colors. I look at the art, too!

I have a friend who lived in Laguna Beach as a young woman (she just celebrated her 88th birthday!) and loves visiting it still. I'll send her a link to this post.